'No food, no shelter': Rohingya suffer in Bangladesh 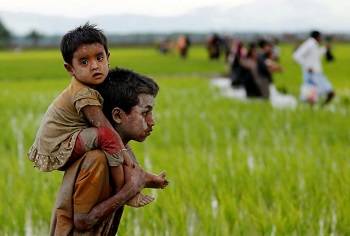 Hundreds of Rohingya, including children, were jostling to get hold of aid packages being thrown from trucks at Balukhali in the Bangladeshi city of Cox's Bazar bordering Myanmar.

Women, many with babies on their shoulders, stood in torrential rain in the hope of getting food, tarpaulin and clothes distributed by local Bangladeshi people.

Chaos was all around at Balukhali, where a large number of Rohingya have taken refuge, as the rain added misery on the persecuted community.
Highlighting the grave conditions for Rohingya refugees, aid agencies reported on September 15 that at least two children and one woman were killed in a stampede that broke out as aid was being distributed.

More than half of the estimated 412,000 Rohingya, who have escaped Myanmar's military crackdown, live in makeshift sites without proper shelter, clean drinking water and sanitation.
On Sunday, police and army officials were checking vehicles coming from the camps towards Cox's Bazar city, a day after the Bangladesh government announced restrictions on the refugees' movement.

Arefa, along with hundreds of fellow Rohingya, was among the crowd waiting for the much-needed aid.

She was drenched, holding her two-year-old daughter Minara on her shoulder. Arefa was crying. She said there was no food for her and her two children.

"I do not have food, no shelter and no way to cook anything. I have yet to get any relief," she said with tears pouring down. "If I get aid I eat, otherwise I go hungry."

Arefa, who arrived here two days ago from Lambaguna village in Akyab district, said she is 40, but she looked much younger. Her husband, Nabi Hussain, was shot dead by the Myanmar military, she said.

A fellow Rohingya offered her a small tarpaulin tent until she arranges her own. But at the private aid distribution center in Balukhali, she had little luck.

Myanmar's military launched a bloody crackdown on ethnic Rohingya, who are mostly Muslims, after an armed Rohingya group carried out a deadly attack against the army.

Since then the army has killed more than 400 people and driven out hundreds of thousands from the western Rakhine state, creating one of the biggest refugee crises of recent times.

Distressed Rohingya have built shanties made of tarpaulin and bamboo sticks on sandy hillocks and in open spaces, as there is limited space in the registered camps run by national and international NGOs.

The Inter Sector Coordination Group, which comprises various humanitarian agencies, on Sunday said in a report that 326,700 people in makeshift and spontaneous settlements were in need of emergency shelter.

Manzoor Ahmed, who had pitched a tent on a private land provided by a local Bangladeshi, said his house was inundated.

"It's really bad, water has entered our home. The entire area is flooded," he said.

"I have no space to sleep. My brain is not working. I do not know what to do."

Myanmar - Who are the Rohingya?

The 65-year-old arrived in Balukhali three days ago with 11 members of his family. He said he was lucky; none of his family members got killed.

People were seen carrying bamboo sticks on their shoulders to erect homes as the muddy narrow roads slowed down aid work.

'People are still on the move'

Aid agencies are warning that operations cannot run in this manner. Coordination between humanitarian agencies, local NGOs and the authorities is crucial, they have said.

"We are trying to expand our activities and build new clinics and health posts to give basic access to healthcare, but at the end of the day everything is slowed down by the infrastructure and logistic challenges," said Robert Onus, emergency coordinator at Doctors Without Borders (MSF).

"The scale of the crisis may not be well understood by everyone because it's impossible to describe unless you see it with your own eyes," he told Al Jazeera.
Fearing an outbreak of diseases, authorities have set up vaccination booths in various camps for children under five.

Misada Saif, spokesman for the International Committee of the Red Cross (ICRC), told Al Jazeera: "It's a huge crisis and beyond the capacity of many international organizations working on the ground. People are still on the move, families are looking for shelter."

At the distribution center at Balukhali, 20-year-old Fahmida Begam waited for support with her one-year-old son, Yasir Arafat. She arrived one week ago from Myuinisong in Maungdaw with her husband, Shamsur Alam, and their two children.

She stays in a shanty that she says is too small to accommodate six members of her family. Due to the rain, they could not sleep last night as the tarpaulin leaked, making the sandy floor too cold.

"Yesterday I came to receive relief, but returned empty handed. I came to try my luck again but it's around 12pm and I have not got anything."

A Rohingya boy carries a child after after crossing the Bangladesh-Myanmar border in Teknaf, Bangladesh. REUTERS