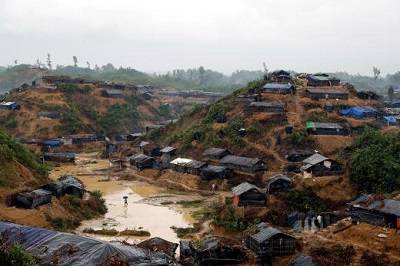 Rohingya refugees who were shot, beaten, stabbed, burned or raped by the Myanmar military are struggling to heal in hospitals in neighboring Bangladesh, exorcising their trauma while their bodies try to recover.

Many of them lie on thin, dirty mattresses on the floor at overflowing hospitals, and their treatment is going very slowly due to substandard conditions.

"Every day, new Rohingya patients are coming to our hospital, most of them pregnant women and children," an emergency physician at Sadar Hospital, Dr. Shab Uttin, told Anadolu Agency. "Many of them are suffering from bullet or knife wounds as well as pneumonia, diarrhea, and infection."

The refugees are fleeing a Myanmar security operation in which security forces and Buddhist mobs have killed men, women and children, looted homes, and torched Rohingya Muslim villages.

More than 480,000 Rohingya have crossed from the northern part of Rakhine state into Bangladesh since the outbreak of fresh violence on Aug. 25, according to the UN migration agency.

According to Bangladeshi Foreign Minister Abul Hasan Mahmood Ali, around 3,000 Rohingya have been killed in the crackdown.

'I begged for their lives’

Uttin said the hospital had performed a grueling 25 operations within the last 24 hours, warning that the situation is getting worse due to a lack of critical medical supplies.

"But we’re doing our best to give them proper treatment all the time," he added.

A 30-year-old Rohingya mother from Maungdaw, Dildar Begom, arrived at the hospital on Sept. 19 with a serious head injury because she was hit with a rifle butt.

Three of Dildar's children and her husband were brutally killed by Myanmar soldiers before her eyes soon after they stormed into the house.

"I begged for my children's lives but they didn’t care," Dildar told Anadolu Agency, crying.

Both Dildar and her only surviving daughter have injured ears because the soldiers pulled their gold earrings out while still attached.

Such scenes of suffering have become common at Sadar Hospital according to Jamilee, who works there as a full-time nurse.

"The army threw a hand grenade into my house, then shot me in the leg at very close range while I was trying to get out," said Iman Hussain, another Rohingya patient at the hospital.

Hussain said he and his sister arrived at Bangladesh’s border after walking through the hills and jungle for nine days.

Strikingly, almost all the children in the hospital have broken legs.

When asked the reason, families said Myanmar’s military would force the children to stretch out their legs and then stomp on them, so they would suffer more while fleeing the violence and not return.

A 7-year-old Rohingya boy from the village of Hasurata, Ensar Ulla, arrived at the hospital with a broken leg. His father Khabib said he had to carry his son on his back for six days to reach the hospital.

The Myanmar soldiers “do this intentionally, they want us to suffer," said the boy’s father. "It was the hardest thing to watch while they were stomping on my son's leg."

Another patient at the hospital, 15-year-old Rukhiya Katu was raped and shot clear through her chest and out her back.

Rukhiya's 67-year-old grandmother, Ayamar Katu, sitting next to her at the hospital, said they were at the same house when the military raided it.

The soldiers immediately shot two of her sons and then raped the daughter, daughter-in-law, and Rukhiya one by one before shooting them, she related.

"Rukhiya wasn’t even married, and she got raped by six military men," the grandmother told Anadolu Agency. "I just wanted to die while witnessing what happened.”

"There was blood everywhere," she added.

As to why the soldiers commit rape, Ayamar said: "This is the most effective way to humiliate us and tell us to never come back again."

A history of repression

Turkey has been at the forefront of providing aid to Rohingya refugees, and President Recep Tayyip Erdogan highlighted the issue at this year's UN General Assembly.

Last October, following attacks on border posts in Rakhine's Maungdaw district, security forces launched a five-month crackdown in which, according to Rohingya groups, around 400 people were killed.

The UN documented mass gang rapes, killings -- including of infants and young children -- brutal beatings, and disappearances committed by security personnel. In a report, UN investigators said such violations may have constituted crimes against humanity.