Healing trauma: The long road ahead for Rohingya 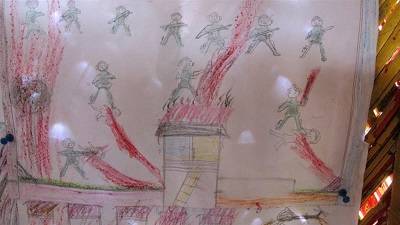 Inside a colorful bamboo structure in Balukhali camp, groups of children sit on the floor, engrossed in board games, plastic animals and other activities. Two scamper about in costumes - one dressed as Nemo, the other as a lion. Tacked on the walls are vivid crayon drawings - the only explicit reminders of the violence these Rohingya children have witnessed.

One 11-year-old boy drew a number of them. "In my village, they did this," he said, referring to his sketches of soldiers killing people and of families in burning houses. One drawing, he explained, shows a playground where the army came and "killed the children", in another, with purple and black helicopters, he pointed at a figure of a soldier who killed a child by "stepping on his chest".

"We were tortured by the Myanmar army. When I draw these pictures I feel good [afterwards]," he said, explaining that drawing helps him express what he experienced.

This safe space for children, run by the local NGO Community Development Centre (CODEC) in partnership with the United Nations Children's Fund (UNICEF), as well as other similar spaces and schools in the refugee camps, allow Rohingya children to interact with each other. According to UNICEF, about 60 percent of the new refugee arrivals are children.

Initially, when teachers and outreach workers went door to door to tell parents about these spaces, many of the adults asked whether their children would be safe, explained Lutfur Rahman of CODEC. When the children first came, "they didn't want to talk to each other, and they were also confused about whether this place would be safe or not". They were "uneasy" when given paper and drawing materials, he said.

More than half a million Rohingya have arrived in Bangladesh since the Myanmar army began a campaign against them that the United Nations has described as ethnic cleansing.

In the squalid, overcrowded camps, where refugees struggle to access food and water, and people continue to arrive, many mental health workers say they're in the initial stages of providing protection and psychological first aid (PFA). This entails offering basic support and comfort through, for example, listening to what someone has to say or gestures such as giving someone a glass of water.

In the first few weeks after big traumas, PFA is "our main approach," explained Cynthia Scott, a clinical psychologist and mental health activities manager at Doctors Without Borders, known by its French initials, MSF.

"It's not the time for counselling or in-depth discussion about feelings, it's more about comfort, stabilizing someone, so they come back to their normal thinking and functioning."

People feel "like they're going crazy", she said, and a big part of her job right now "is just to say, 'No. You're not going crazy'."

Mental health workers say refugees are suffering from flashbacks of violent, traumatic events, anxiety, agitation, acute stress, recurring nightmares, not being able to sleep, eat or even speak, and in more severe cases, being unable to look after themselves or their families.

"We are facing an overall distressed population," said Mahmuda, who goes by one name, a psychologist and mental health programme associate at UNHCR in Bangladesh.

Mahmuda visits groups of refugees to provide PFA, trauma counselling, and to help people manage stress so they can better cope with their current situation.

She disseminates basic messages, she says, to help people acknowledge that they are alive and to understand that they are "safe and secure … and not alone".

Mahmuda says she is closely observing groups who may develop post-traumatic stress disorder in the coming months.

Among those she is working with are survivors of a refugee boat that capsized on September 28, including one woman who lost her child who she was breastfeeding. The pain she feels in her breasts compounds the trauma of her loss, Mahmuda explained.

But as refugees move around in search of aid and shelter, following up with them can be difficult, Mahmuda said.

The stories of pain are widespread.

One clinical psychologist with Action Against Hunger said one of the worst cases she has seen is that of a woman who fled her village without her child when it came under fire. She now suffers from intense feelings of guilt, exacerbated by seeing other mothers with their children.

In Kutupalong makeshift camp, Bangladeshi medical charity Gonoshasthaya Kendra, in partnership with Doctors of the World, runs a mobile clinic out of a tent.

Liza Akter, an assistant clinical psychologist at the health post, said if she's on her own she can see about 30 patients a day. One female patient who was shot in the shoulder can no longer look east - where Myanmar is. "Burma is trauma," Akter explained, using the name by which the country was formerly known.

Earlier that morning, Akter saw a woman who lives in the camp with her daughter. Her husband and son were killed, and her other daughter was raped then killed. The woman was suffering from anxiety, heart palpitations and was "crying, crying, crying".

Akter said she could do little but listen to her. "Their condition is difficult. It's so miserable," she said.

On Saturday, September 30, Omar Faruk, an assistant clinical psychologist stationed at the post, went to conduct a group counselling session with another colleague.

He recalled how, on a previous occasion when he was conducting outreach work, a small girl had started to cry when he entered the tent. When he asked the girl's mother why her daughter was scared, the woman told him that it was because of his pants. Rohingya men usually wear a lungi, a kind of sarong with a knot at the top where valuables are stored.

"These pants reminded her of the pants the military wears," he said.

Faruk explained that they prefer working with larger groups as refugees are more comfortable speaking this way.

Walking through the camp, Faruk made a right turn onto a narrow dirt path. His colleague approached some women - the men had gone out, some to collect aid - and almost immediately, some 14 refugees appeared with their children and babies and headed into a large tent.

Inside, Faruk began by asking the women how they were, then, going around the circle, he asked them where they came from, what happened in their village and how it felt to leave everything behind.

"It feels like they're not burning our houses, it feels like they're burning us," said Mariam, 23. Although no one in her immediate family died, she said some of her cousins were killed. When she goes to sleep, she said she imagines soldiers "killing all my family members, my parents and they're killing Muslim people".

"They would kill us [if we returned]," she said.

"[It was] painful to see our homes burning," said 22-year-old Apsara Begum, who says her husband was beaten to death by Rakhine Buddhists about three years ago while she was pregnant with their son.

Scott says MSF's mental health programme is now scaling up - adding 10 more counsellors to the seven they already have and setting up more medical posts.

In her experience, she says, Rohingya do not seek help citing mental health problems, but their "emotions or stress … present as a physical problem" like headaches or backaches.

At the beginning of the crisis, Scott says they "received probably the most vulnerable".

"Most people, even if they've suffered these huge traumas, witnessing horrific things, they had to keep going just to get basic shelter, food and water and so the people presenting to us were the ones that could not manage that," she said, adding that most people are able to recover from the trauma.

For the most part, people are "having a normal response to an abnormal situation".

The concern is where acute trauma begins to affect people's ability to function. She anticipates that in the next few months, as people start to settle into the camps, there'll be "more of the mental conditions that are lasting".

And while these refugees have escaped the violence in Myanmar, she said the dire conditions in the camps - the World Health Organization has begun distributing cholera vaccines fearing an outbreak - give rise to a different kind of "chronic stress".

Over time, tensions and frustrations in the camps will grow, she believes.

She says she has probably seen the worst cases as they are the ones that make it to the hospital - people who are "just kind of lost in their own mind" and "not able to think, not able to know what to do to keep their families safe or to find food".

For her, some of the most heartbreaking have involved teenage girls with intellectual disabilities who were raped repeatedly. They've found the families of some, she says, but there's an absence of shelters for people with disabilities where they'll be protected from being abused again. For now, she's had to keep some of these girls at the MSF hospital.

"You cannot just put someone like that in a shelter, alone," she said.

For sound mental health, basic needs must be fulfilled, and then, normal everyday routines must be established, she said, stressing the need for special supported shelters and schools that will help children adjust.

The 'resilience' of children

According to Scott, children are resilient but also vulnerable without proper support.

"They've witnessed a lot of horrible things. They've seen people killed, they've seen their mothers raped, they have missing relatives. We had children shot in the back while running away."

Back at the children's space, as the playing winds down, Wayne Bleier, a child protection and psycho-social specialist at UNICEF, points out that the children are in a space where they can be just that.

"I'm always heartened by the resilience I see in children and their ability to cope and to heal themselves," he said.

With support, connection to a community, specialized programmes and security restored, most will be okay, he says. A stable family situation can also be crucial.

For now, the host community has been welcoming, he adds. "That goes a long way for healing. They feel safe here."

But he points to the uncertainty of the future.

"What worries me here is refugees are in limbo, and they're not getting a clear message now as to what the future holds - and that wears on people."