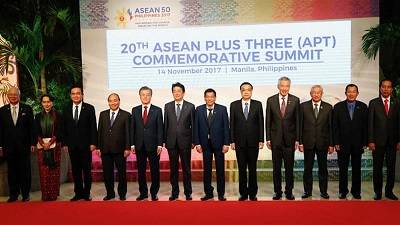 Philippines President Rodrigo Duterte, this year's Chairman of the Association of Southeast Asian Nations (ASEAN), managed to fend off criticism of his "war on drugs", which has left thousands of people dead.

"I think Duterte was very smart in using this event to legitimize himself and push back against criticism of his drug war," said Richard Heydarian, a geopolitical analyst from De La Salle University in Manila.

"We saw no major country raising the drug war issue or if ever they raised it, it was very low-key."

But it was tit-for-tat.

Duterte spared his Myanmar counterpart, de facto leader Aung San Suu Kyi, from having to explain or account for the plight of the 600,000 Rohingya who have been forced to flee the country to Bangladesh.

Driven out by violence from state forces, the displaced Rohingya are languishing at refugee camps. United Nations Secretary General Antonio Guterres has described their situation as "catastrophic".

Duterte's spokesman said two of the 10 ASEAN leaders brought up the Rohingya issue at their plenary meeting on Monday, and that Suu Kyi assured the group that the crisis was being addressed.

The spokesman also said that Suu Kyi agreed to accept humanitarian assistance for the Rohingya, which Myanmar had earlier been accused of restricting.

In the penultimate draft of Duterte's "Chairman’s Statement" - a document issued by the host leader to sum up the results of the group's discussions - the ASEAN leaders briefly tackled the Rohingya situation as a matter of "disaster resiliency".

"We … extended appreciation for the prompt response in the delivery of relief items for the Northern Viet Nam flash floods and landslides victims, the displaced communities in Marawi City, the Philippines, as well as the affected communities in Northern Rakhine State, Myanmar," the statement read.

There was no other mention of the issue in the 26-page document.

Meanwhile, the document contained two paragraphs on the illegal drug problem and how the member countries have worked together in efforts to solve it.

There was, however, no mention of Duterte's campaign against illegal drugs or its victims.

The document's segment on human rights tackled neither the Rohingya crisis nor the drug war.

"It's an absolute travesty," Heydarian said of the group's silence on the Rohingya.

"I think this is the worst thing that could happen to ASEAN because next to Syria, the Rohingya crisis is the biggest humanitarian crisis that we're facing right now in the 21st century."

Duterte's determination to protect his drug war from scrutiny and criticism has left ASEAN unable to speak on human rights at all, added Heydarian.

In a media conference to cap off his chairmanship, Duterte blasted Canada Prime Minister Justin Trudeau, one of several world leaders who had bilateral meetings with ASEAN, for bringing up "human rights, extra-judicial killings and rule of law" in his one-on-one with Duterte - even if Trudeau said Duterte was "receptive" and "very cordial" about it.

"It is a personal and official insult. That is why you hear me cursing," Duterte said. "It angers me. When you are a foreigner, you do not know exactly what is happening to this country."

This kind of talk leaves it impossible for any leader to put a counterpart to task over human rights issues, said Heydarian.

"If the chairman of the ASEAN, which is the Philippines, is saying you are to have no say on what's happening with our human rights issues; when you're telling the world, 'It's none of your business how we conduct our drug war'; what is the moral ascendancy of the ASEAN as a whole to tell Myanmar to treat its people better?"

A statement released in September by ASEAN foreign ministers on the "humanitarian situation in Rakhine State" foreshadowed the leaders' silence on the matter.

The statement, issued by Philippines Foreign Affairs Secretary Alan Peter Cayetano on the sidelines of the United Nations General Assembly in New York, condemned the attacks on Myanmar security forces that triggered the latest spate of violence in Rakhine - but not the ensuing destruction of entire Rohingya communities that forced them to flee en masse.

Malaysia, an ASEAN member, disagreed with Cayetano's document and disowned it, saying it was not based on "consensus", a key ASEAN principle.

Brunei, Cambodia, Indonesia, Laos, Malaysia, Myanmar, the Philippines, Singapore, Thailand and Vietnam, which comprise ASEAN, have agreed never to say or do anything unless they are in "consensus", as well as to never interfere in one another's domestic affairs.

Heydarian said ASEAN's insistence on "consensus" and "non-interference" has constrained the group from directly addressing crucial matters, settling instead for polite but impotent rhetoric.