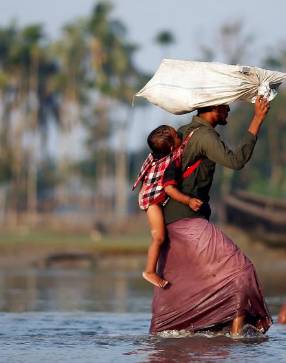 Activists have called for stronger action to stop the "ongoing genocide" against the majority-Muslim Rohingya ethnic group after US Secretary of State Rex Tillerson said he was against "broad-based economic sanctions" against Myanmar.

At a joint press conference with Myanmar's de facto leader Aung San Suu Kyi in the capital Naypyitaw on Wednesday, Tillerson said he favoured individual sanctions against military officials based on "credible and reliable information" of their involvement in atrocities.

Responding to Tillerson's call for an independent investigation, Tun Khin - president of Burmese Rohingya Organisation based in the UK - asked how such an investigation would be carried out when the military is refusing to allow a fact-finding mission on the ground.

"Rohingya people are facing genocide in the 21st century. This is the time to act. What the US and the international community is doing is not enough," said Tun Khin.

According to a report published on Tuesday by the United States Holocaust Memorial Museum and Fortify Rights, there is "mounting evidence" of genocide against the Rohingya in Myanmar.

Tun Khin called for targeted sanctions against Myanmar's military, which has driven out about 600,000 Rohingya from western Rakhine State into neighboring Bangladesh since August.

"Every day Rohingyas are being killed and their houses burnt. It's two-and-a-half months since the military offensive began and still atrocities are continuing," he said.

"We demand that Myanmar be referred to the ICC [the International Criminal Court] and the UN peace-keeping force be deployed to protect the lives of Rohingya. We also need a UN-mandated global arms embargo on the country."

Human rights activists have also lambasted a report by Myanmar's army that said no Rohingya civilians were killed in the military crackdown launched in the wake of deadly attacks on soldiers by an armed Rohingya group.

Ro Nay San Lwin, a Rohingya activist based in Germany, said the army will never admit its crimes against the Rohingya - which troops have been committing for the past 39 years.

"They have committed many crimes against other minorities as well such as Karen, Kachin and Shan," said Ro Nay San Lwin.

Myanmar's army has transferred Major-General Maung Maung Soe, who was behind the crackdown against the Rohingya, to another post.

But Ro Nay San Lwin said this was just a "public relations exercise".

"This was done to show that they [the military] are taking actions ahead of Tillerson's visit."

A Rohingya refugee man carries his son on his back and his belongings as he arrives at a port after crossing the Bangladesh-Myanmar border, in Teknaf, Bangladesh October 25, 2017. REUTERS