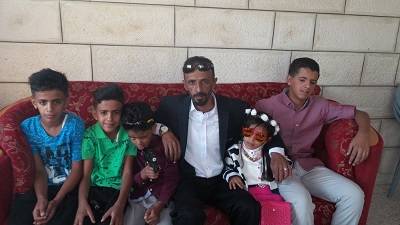 An entire village consisting of dozens of Palestinian Bedouin families is threatened with imminent forced displacement, after Israel issued a rare evacuation order for the whole community.

Jabal al-Baba, which lies to the east of Jerusalem in the occupied West Bank, is home to more than 300 people.

"Residents are becoming paranoid of the future because it is unknown," Atalah Jahalen, a local community leader, told Al Jazeera on Saturday.

"All their lives, they have lived and built in this area, and now all of it can be destroyed at any moment."

According to Jahalen, Israel's civil administration and police entered Jabal al-Baba on Thursday. They hung a poster in a central location detailing the evacuation decision and displaying a map of the area.

The order informed residents that they had eight days to collect their belongings and leave, or else Israeli authorities would return to force them out.

Israeli officials also scattered copies of the map on the ground and took pictures of it before leaving.

Jabal al-Baba is situated in the heart of Israel's contentious E1 plan, which aims to connect the illegal mega-settlement of Maale Adumim to Jerusalem - settlements are considered illegal under international law.

The plan would further isolate occupied East Jerusalem from the rest of the West Bank and sever the Palestinian territory from north to south.

Residents of Jabal al-Baba arrived in the area after being displaced from the Negev during Israel's establishment in 1948.

Since Israel's seized the Palestinian territory in 1967, the Israeli government has refused to recognise Jabal al-Baba and has led routine demolition campaigns in the village for years.

The village is located in Area C - which is under total Israeli administrative and military control. Obtaining permission to build in Area C is nearly impossible for Palestinians.

According to Jahalen, 52 of the village's 57 homes have been demolished in the last three years for having been built without Israeli permits. In August, Israeli forces demolished the community's kindergarten.

The residents have no choice but to live in a perpetual cycle of rebuilding homes and structures demolished by Israel.

"In every corner of this village, you will find a demolished house - and a rebuilt house standing next to it," said Jahalen.

But the latest Israeli order is a break from the routine in Jabal al-Baba.

The evacuation order issued on the community is one typically used to evict unauthorised Israeli settler outposts constructed in the occupied West Bank.

Alon Cohen-Lifshitz, a researcher for Israeli NGO Bimkom, told Al Jazeera the recent use of the order on Palestinian communities is aimed at speeding up the expulsion of Palestinian residents.

Cohen-Lifshitz said that demolition and stop-work orders that are routinely issued against specific structures in a community had "limited success" for the Israeli government, which found itself stuck in court for years battling appeals and petitions against the orders.

The evacuation order necessitates fewer legal proceedings than previous demolition orders placed on the community, and allows for Israel to target the entire village, rather than specific homes and structures, Cohen-Lifshitz explained.

Last week, Israel used a similar order as in Jabal al-Baba on two Palestinian villages in the Jordan Valley, prompting Aviv Tatarsky, a researcher for Israeli NGO Ir Amim, to conclude that "this is not a one-time thing or a targeting of a specific area".

"It's a new method Israel has decided to use against Palestinians."

A spokesperson for the Coordination of Government Activities in the Territories (COGAT), Israel's agency responsible for implementing Israeli policies in the Palestinian territory, told Al Jazeera the order was issued "as part of the enforcement against the illegal construction phenomenon in the area".

Tatarsky said that regardless of the evacuation being linked to Israel's plans to expand Maale Adumim, Israel's "bottom line" in Area C is to "push Palestinians towards the Area A and B enclaves", which comprise the remaining 40 percent of the West Bank.

Area A is under the control of the Palestinian Authority and encompasses the majority of Palestinian cities. Area B comprises most Palestinian rural communities and is under Palestinian administrative and joint Palestinian-Israeli security control.

"Israel wants to make the number of Palestinians in Area C as small as it can," said Tatarsky.

Jabal al-Baba, located on the Israeli side of Israel's separation wall, which will surround the village on three sides upon its completion, is a thorn in Israel's development plans in Area C.

"But we have an important role in resisting Israel's forced displacement of Palestinians," he added.

"Our presence here blocks Israel from expanding its settlements into Jerusalem," explained Jahalen, noting that the Bedouin in Area C are the last line of defence against what many activists and rights groups have said is Israel's goal of annexing the entirety of Area C.

After years of fighting Israel's policies, residents of Jabal al-Baba are now facing an uncertain future that could leave them displaced a second time, with no alternative location provided by the Israeli government.

But the community has vowed to stay.

"We will not surrender," said Jahalen.

"If they succeed in evicting us, then they will move on and evict all the other [Palestinian] communities in the area," he added.