Rohingya return to Myanmar 'puts them in tiger's grasp' 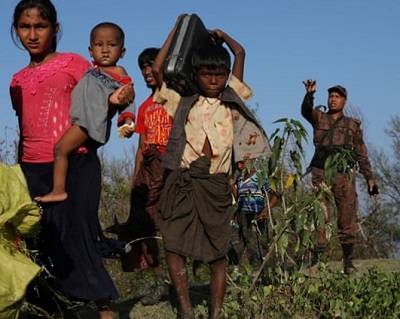 An agreement signed between Bangladesh and Myanmar concerning the voluntary repatriation of more than 600,000 Rohingya, exonerates Myanmar's security forces of any responsibility for their displacement, and places the persecuted minority in harm's way, according to a Bangladeshi opposition politician.

Bangladesh's main opposition party criticized the government for "selling itself" to the Myanmar government in order to get an agreement to remove the Rohingya.

"Where are you sending the Rohingyas? They fled from the grasp of a tiger in fear of death, but you're again pushing them towards the same tiger," Mirza Fakhrul Islam Alamgir, BNP secretary-general, said on Sunday.

"One will get an impression going through the deal that the government has accepted whatever Myanmar said."

The agreement, signed on November 23 by the country's two foreign ministers, blames a Rohingya rebel group rather than Myanmar's army, which carried out a campaign of arson and murder against the persecuted minority.

The text of the agreement contradicts the nearly unanimous conclusion of the international community, including that of Bangladesh, which blamed the mass exodus on atrocities by the Myanmar military.

At an OIC Contact Group meeting in New York in October, Sheikh Hasina, the Bangladesh prime minister, described the events in Myanmar as "ethnic cleansing" and stated that "the ongoing military operations by the Myanmar authorities have created havoc in the Rakhine State."

Human rights organizations told Al Jazeera there were several concerns with the agreement which also suggested that Myanmar had taken the "necessary measures to halt the outflow [of the Rohingya]".

Olof Blomqvist, a researcher with Amnesty International, told Al Jazeera it was "far too premature" to start talking about repatriating the community.

"With whole villages burned to the ground, where will the Rohingya live?" he said.

"Rohingya are still fleeing across the border into Bangladesh on a daily basis, and back in Myanmar, they are living under a system of state-sponsored discrimination and segregation that amounts to apartheid.

"While Rohingya refugees have the right to return to Myanmar, under international law, no one should be forced back to a situation where they could face persecution or serious rights violations".

The seven-page agreement stated that the Rohingya - which are only referred to as "Muslims" - had "taken shelter in Bangladesh following the terrorist attacks on 9 October 2016 and 25 August 2017".

These dates refer to the attacks by the Arakan Rohingya Salvation Army on law police and security posts in the Rakhine state of Myanmar.

In October 2016, the ARSA attacked three police posts in Maungdaw and Rathedaung townships killing nine police officers and in August 2017, it attacked about 30 security posts in the state.

However, following both incidents, the international community blamed the exodus - about 87,000 after October 2016 and over 600,000 since August 2017 - on human rights violations carried out by Myanmar security forces.

In September, the United Nations High Commissioner for Human Rights called the actions of the Myanmar army a "textbook case of ethnic cleansing" a view subsequently echoed by the US.

A UN report also concluded that the "Myanmar security forces purposely destroyed the property of the Rohingyas [and] scorched their dwellings and entire villages in northern Rakhine State, not only to drive the population out in droves but also to prevent the fleeing Rohingya victims from returning to their homes."

There are also significant concerns about the practicalities of the agreement which says that the Myanmar government will "encourage those who have left Myanmar to return voluntarily and safely to their households and original places of residence or to a safe and secure place nearest to it of their choice" and will not have to be "settled in temporary places for a long period of time".

"Although the Myanmar government has pledged to construct new houses, no timeline has been set. There is a real risk that returnees, like tens of thousands of other Rohingya in Rakhine state, will end up in displacement camps in deplorable conditions, not least because the government continues to restrict aid groups' access," Blomqvist said.

The agreement also requires that the Rohingya prove that they are resident of Myanmar and sets out a list of documents that can be used as evidence of residency.

But Amnesty International considers it "completely unrealistic to ask many of the fleeing Rohingya to prove residency" who will have "lost crucial documents during their flight in panic into Bangladesh".

"This insistence on 'verification' could likely make it impossible for many thousands to return," Blomqvist added.