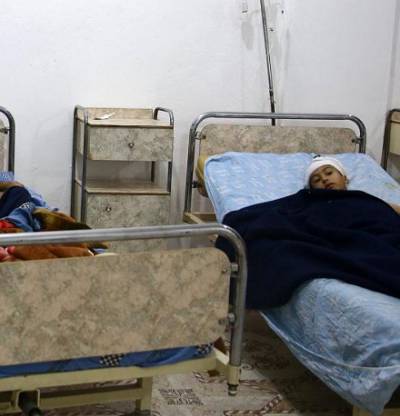 Hundreds of patients are awaiting evacuation from Syria's Eastern Ghouta, which is besieged by the Bashar al-Assad regime.

Many babies and children have lost their lives in the area due to hunger and lack of medicines.

Assad regime, which has intensified its siege on Eastern Ghouta in the last eight months, targets even schools and orphanages in the besieged area.

Until April this year, it was possible to bring food and medicine to the region by secret tunnels and dealers but now it has become impossible.

This situation made impossible the treatment of hundreds of patients.

Opposition-held Rural Damascus Health Directorate Spokesman Fayez Arabi told Anadolu Agency that there is a blockade in Eastern Ghouta for many years.

"The number of our patients, who are awaiting evacuation due to inadequate medicine and medical equipment, has surpassed 600," Arabi said.

He added that the number is expected to increase.

Arabi said most of the patients are those who have cancer or need emergency surgery.

Babies and children are also affected badly by the Assad regime’s siege of Eastern Ghouta.

According to information Anadolu Agency’s correspondent received from Rural Damascus Special Hospital, 527 babies died in Eastern Ghouta since 2014. 227 of them died in the first 10 months of 2017, due to hunger and lack of medicines.

Home to some 400,000 civilians, Eastern Ghouta has been under siege by the Assad regime forces since December 2012.

The besieged area falls within a network of de-escalation zones -- set up in Syria by Turkey, Russia and Iran -- in which acts of aggression are forbidden.

Syria has been locked in a vicious war since early 2011, when the Assad regime cracked down on protests with unexpected ferocity.

Since then, hundreds of thousands of people have been killed and more than 10 million displaced, according to UN officials.

Injured students lie on beds at a field hospital in the town of Jisreen, in the eastern Damascus suburb of Ghouta, Syria, October 31, 2017. REUTERS