How mainstream media gets Palestine wrong 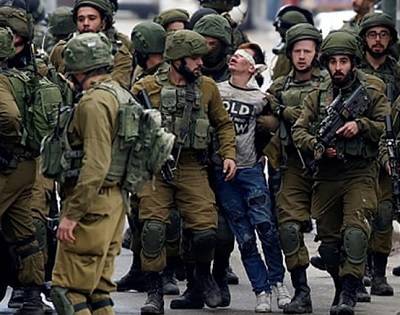 The photo of 16-year-old Fawzi al-Junaidi blindfolded, bruised and surrounded by a dozen Israeli soldiers went viral on social media. It was touted as the emblem of Israeli oppression.

But for Western mainstream media, it was difficult to accommodate this photo, amid all the talk about "anger", "rage", "violence", and the regularly recycled imagery of burning tires and young men with hidden faces hurling stones.

Fawzi's arrest was presented as a singular case, an exception, and what happened to him after the photo was snapped did not interest mainstream media. There was little mention of the thousands of children currently imprisoned or the fact that they are the fifth generation of Palestinians living under a military occupation.

Likewise, while many foreign correspondents were saying that US President Donald Trump's decision to recognize Jerusalem as the capital of Israel had thrown "gasoline in the fire", there was little mention of the fact that that same city has been systematically ethnically cleansed for the past 70 years.

In Western mainstream reporting, Palestinians yet again were presented as irrational "angry" actors, their oppression yet again denied the coverage it deserves.

Israel has also managed to mask the Palestinian question as a religious issue between Muslims/Arabs and Jews.

The mainstream media focus is always on Palestinian reaction and not on Israeli action and it insinuates that Palestinians are on the offence when in fact they are on the defense.

It is within the contours of this "defensive" discourse that Israel has built itself and that mainstream media reports from in the region. That is why, Palestinians "riot" and Israeli forces "disperse", as Israeli government spokesmen are always quoted as saying. That is why, we see articles referring to the apartheid wall as a "separation wall" or correspondents reporting from Jerusalem never saying "occupied Jerusalem", which it very much is according to international law.

The general media narrative will have you believe that Gilo, the Israeli settlement in East Jerusalem, and other illegal colonies in Palestine are simply "neighborhoods" and that the West Bank is not occupied, but "contested" or "disputed".

What was different about the latest media extravaganza on Palestine, however, was that the fraught relationship between mainstream media outlets and Trump pushed for the reporting angle to change. Trump's attacks on major news organizations and the public fixation on his scandal-prone administration made media coverage of the latest assault on Palestinian rights a bit more critical, but not in the right direction.

Mainstream media presented Trump's December 6 announcement as his latest blunder, further obscuring what was really going on. There was little mention of the daily struggle of Palestinians living under occupation or the history of land annexation and the Zionisation of Jerusalem.

Nor was there much discussion about the fact that Trump merely chose not to sign a waiver on a declaration that the US Congress had already made two decades ago. Nor was there any reflection on how the US has enabled and funded the Israeli colonial project in Palestine. Nor was there a reference to the fact that Israel built its entire state on the premise of another declaration made a hundred years ago by another man in power - Lord Arthur Balfour.

At the time when Balfour was occupying the post of British foreign secretary, the British colonial project had already produced a solid narrative presenting the Palestinian people as backward savages, justifying occupation and encouraging brutal colonial practices.

That narrative gave Balfour the confidence he needed to declare in 1917 a Jewish homeland in the region with complete disregard for the population that lived there. It also helped Zionists push the ideas that Jewish Zionists are "a people without land for a land without people" and that they are "making the desert bloom" - completely erasing the existence of a native population there.

When the Palestinians revolted in 1936 against the British Mandate and the Zionist movement, the image of the "angry" "irrational" Arab emerged. Lord William Peel, who headed the Palestine Royal Commission, was tasked with investigating the "unrest" and "disorder" in the region. The report which the commission produced barely mentioned British oppression, and much like today's mainstream media reporting, focused on the Palestinian reaction to the presence of English soldiers and the expanding Zionist endeavor.

Today, as we are supposedly in the "post-colonial" age, settler colonialism is considered a thing of the past. Yet, colonial bias still dominates mainstream portrayal of Palestinians. In the past few decades, Israel has been quite successful in maintaining a grip on the general narrative and ensuring that the bias persists.

The Israeli authorities have meticulously pieced together the images of the "angry", "violent" and "irrational" Arabs and the civilization force that the Israeli state is. They have sold it to the world in an attempt to legitimize its violations of human rights.

Israel has also managed to mask the Palestinian question as a religious issue between Muslims/Arabs and Jews. This narrative aims to erase the Palestinian identity and portray the occupation as a religious conflict. It also makes it easier for Zionists to throw accusations of anti-Semitism at anyone that opposes and criticizes Israeli colonialism.

And for decades now, the Palestinian question has been presented as a conflict between two equal sides. The context of colonization, apartheid, illegal settlements, extrajudicial killings, home demolitions, arbitrary arrests and administrative detentions are mere footnotes in this general narrative. The word colonialism is avoided altogether because it conjures memories of the crimes of an era that Western powers would rather conveniently forget.

Nothing will change in Palestine until these colonial narratives are challenged and defeated in mainstream media. A critical mass of people around the world need to be made aware of what is really going on so that there is real and sustained pressure on governments to change their position on Palestine and stop supporting Israel's colonial project.

Maintaining this media narrative is not only a form of complicity in Israeli oppression against Palestinians, but also helps sustain it.