Syrian refugees 'at risk of being pushed to return' 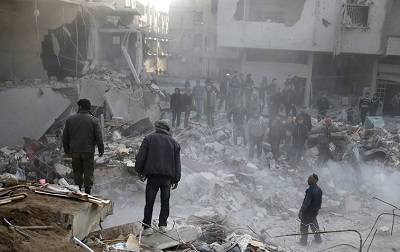 Aid agencies have warned that hundreds of thousands of Syrians are at risk of being pushed to return in 2018, despite ongoing violence in the Middle Eastern country.

The warning was issued by six humanitarian agencies amid what they called a "global anti-refugee backlash", harsher conditions in regional countries who have taken in Syrians and a "misleading rhetoric" suggesting the country is safe for refugees to return to after victories by the Syrian regime.

A new report by aid agencies including the Norwegian Refugee Council (NRC), Save the Children and CARE International, said that in 2017, there were three newly displaced Syrians for each of the 721,000 internally displaced people (IDPs) and refugees who returned home.

"The majority of Syrian refugees and internally displaced live under terrible conditions and want to return home, but their return must be informed, voluntary, safe, assisted and protected. Now, return would neither be safe nor voluntary for the vast majority who fled the war and the violence," NRC Secretary-General Jan Egeland said in a statement.

The new report states that in the first nine months of 2017, 2.4 million Syrians fled their homes.

Most of last year's returnees were internally displaced people (IDPs), with about 66,000 refugees coming back from foreign countries.

The humanitarian agencies warned that governments in Europe and the US are putting lives at risk by closing their borders and forcing Syrian refugees back, or publicly discussing measures for it.

An NRC spokesperson told Al Jazeera the US and wealthier nations in Europe are also showing a lack of solidarity with the region.

"[They] can be doing so much more to help the refugee-hosting countries in the Middle East," Karl Schembri said.

Within the region, especially in Lebanon and Jordan, a lot of refugees are being deported, he continued.

"Most of the time it's grown-up males who are the breadwinners, so that pushes the entire family back to Syria.

"Besides direct deportations, some of the refugees are living in such desperate conditions.

"We've just seen people dying of the cold in Lebanon. Many of them in the region can't work because they don't have work permits.

"There are all sorts of factors pushing them to go back to Syria."

Last year saw reduced violence in parts of Syria, but the aid agencies said the country is still "volatile and dangerous".

On Sunday, Russia stepped up air strikes in Idlib after one of its fighter jets was shot down there by Syrian rebels. This came days after the Syrian regime carried out a suspected chlorine gas attack in the rebel-held territory of Eastern Ghouta.

Damaged buildings after an airstrike in the besieged town of Hamoria, Eastern Ghouta, in Damascus, Syria [Bassam Khabieh/Reuters]