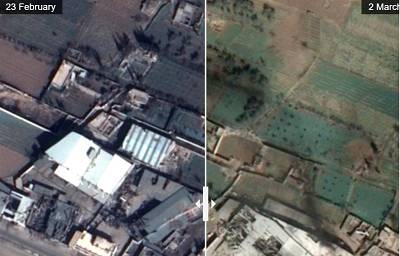 According to UN analysis, regime bombardment has levelled residential areas, infrastructure and businesses.

The UN has released satellite imagery from areas inside Eastern Ghouta, showing the destruction continuous regime bombardment has caused.

The Damascus suburb has been targeted by the continuous air attacks since the Syrian regime, aided by Russia, launched an air offensive on the largely rural area outside the capital on February 18.

The comparative images were taken on 23 February and 2 March and show damage done to buildings, infrastructure and agricultural areas.

"The images show us that there has been an increase and heavy bombardment in Eastern Ghouta, particularly in Ghouta," Einar Bjorgo of the United NationsOperational Satellite Programme told Al Jazeera.

That UN programme was responsible for taking and analyzing the satellite images.

"It can be heard to distinguish between residential and businesses, but we do observe damage to a large different of buildings, including what seems to be residential areas," Bjorgo said.

According to Bjorgo, the quality of the pictures is high enough to distinguish between objects that are 50cm in diameter, which allows analysts to find even small traces of damage.

"We see certain areas where there is severe damage compared to a week ago," Bjorgo said.

Eastern Ghouta, home to nearly 400,000 people, has been besieged by President Bashar al-Assad's forces since opposition groups took control of the area in mid-2013.

While Russia and the Syrian regime say they are aiming at armed groups, who it refers to as "terrorists", civilian neighbourhoods and sources of livelihood have been attacked frequently.

Since the regime offensive started, at least 674 civilians have been killed, the Syrian volunteer group White Helmets claimed on Friday.

The aerial bombardment has drawn international condemnation, but a 30-day ceasefire unanimously voted for by the members of the UN Security Council last Saturday has largely failed to hold, as air raids have continued unabated.

On February 24, the Security Council voted in favourof a 30-day truce, which was violated only hours later by.

And, on February 26, Russia said it would implement a five-hour ceasefire daily as well as evacuation corridors to allow the area's 400,000 residents to escape the bombing campaign.

But residents say neither the ceasefire nor the corridors have been implemented.

Due to the siege, very little humanitarian aid has entered Eastern Ghouta, making access to basic supplies such as food and medicine highly restricted.

According to the UN, nearly 12 percent of children under five in Eastern Ghouta suffer from acute malnutrition - the highest rate ever recorded since the start of the war in Syria, which has killed close to half a million people.