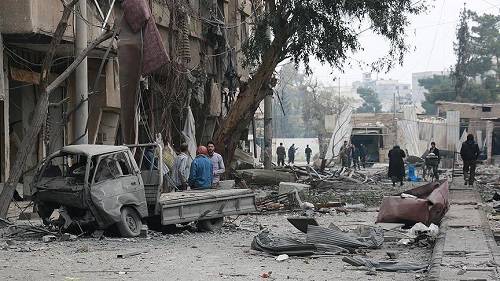 At least 1,389 civilians have been killed in conflicts across war-torn Syria in February 2018, according to a report published by the Syrian Network for Human Rights (SNHR).

The London-based rights group said in a monthly report released on Thursday that 67 percent of the victims were killed by the forces of Bashar al-Assad in besieged Eastern Ghouta.

The SNHR said last month recorded a significant "rise in the rates of killings at the hands of Syrian regime forces and their allies in de-escalation zones".

Regime forces killed a total of 1,079 civilians, including 203 children and 179 women, said the report, noting that an average of eight minors were killed per day by Assad forces.

Additionally, forces believed to be Russian, have killed 77 people, including 27 children and 12 women, according to the report.

The report also highlighted rights violations committed by the PYD/PKK terrorist organization in Syria, saying the group killed 12 civilians, three of whom were children, while ISIS killed 35 civilians, including 10 children and three women.

At least 102 people, including 50 children and 31 women, were also killed in bombardments perpetrated by anti-ISIS international coalition forces.

Six other civilians were killed during clashes between regime forces and armed opposition groups.

Syria has been locked in a devastating conflict since early 2011 when the regime cracked down on demonstrators with unexpected ferocity.

According to UN officials, hundreds of thousands of people have been killed in the conflict to date.