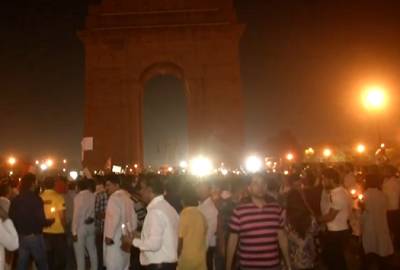 For Amjad Ali, a Muslim nomad, this year's migratory journey from Jammu towards the mountains of Kashmir is going to be longer than usual.

Each year, the 40-year-old and other members of his Bakarwal community typically leave their houses in Rasana and adjoining villages in Indian-administered Kashmir in mid-May.

Their destination is the green pastures of the mountainous region where they graze cattle during the summer months.

This time, however, Ali says their journey started early, "out of fear".

Ali is the uncle of an eight-year-old girl, whose gang rape and murder in Rasana in January sparked large demonstrations in India as well as global outrage.

The Hindu-majority village has become a centre of controversy in India after a police investigation recently revealed the chilling details of the case.

According to a police report, eight male suspects - all Hindus - gang-raped and killed the girl to dislodge the Muslim nomads from the area.

"We left the home earlier than usual because the other community is very angry with us due to the case," Ali said, from Sarasan area of Patnitop.

"They don't want us to live there," he added.

"We even fear to walk in the meadows now. The fear doesn’t leave us. We are worried about our children."

The rape and murder of the minor, whose identity cannot be revealed for legal reasons, has left the whole nomad community shattered and anxious.

Relatives of the girl told Al Jazeera that they feel unprotected.

Muhammad Yusuf, another uncle of the victim who had adopted her from his sister when she was a toddler, also abandoned his two mud-room house in Rasana earlier this month and headed towards Kargil.

"There is a lot fear now. We have land, our home there. Before leaving, we told the police to take care of our home because we feared it might be harmed," he told Al Jazeera.

Yusuf said that almost all Muslim families in Rasana had left the village, except "a few people".

"We have been living there for decades; it breaks my heart to see what has happened," he said.

Bakarwals, who are mostly Muslims, tread across mountains during their biannual migrations from the meadows of Kashmir valley to the hilly forests of Jammu, where some pockets are dominated by ultra-nationalist Hindu groups.

The tension in the area is high. Many say that the rape case has caused a rift among the Hindus and Muslims, who otherwise have been living harmoniously in the disputed region for decades.

"This has definitely created a divide among Muslims and Hindus," Nayeema Mehjoor, chairperson of state-run women's commission, told Al Jazeera.

"It is a brutal incident and the intimidation of the poor family is very unfortunate. I have made a commitment to them that the government will ensure justice; there should be no politics played over the incident."

In Rasana, the family of the main suspect has launched a hunger strike demanding that the investigation is carried out by the federal agency.

On Monday, while hearing a petition seeking the transfer of the trial outside Jammu and Kashmir, India's Supreme Court asked the state government to provide adequate protection to the victim's family and lawyer.

Deepika Rajawat, the lawyer representing the girl's family, said she is facing death and rape threats from supporters of the accused.

Protesters affiliated to a Hindu right-wing group, including some members of the ruling BJP party, rallied recently to demand the release of the accused.

"They Muslim families who live in Rasana and adjoining villages leave every year as part of their annual migration, but this year they left earlier due to the fear. It is difficult for them to go back to their homes there," Talib Hussain, an activist who is campaigning for justice for the victim, told Al Jazeera.

Hussain, who is also a member of the Bakarwal community, alleged that he is facing continuous intimidation and threats from right-wing Hindus.

"Even if I die, I won't give up. I am demanding justice for the victim and my community," he said.

A protest against the rape and murder of an eight-year-old girl in Kathua, in Jammu, April 13, 2018.