Israel and the loss of collective hope 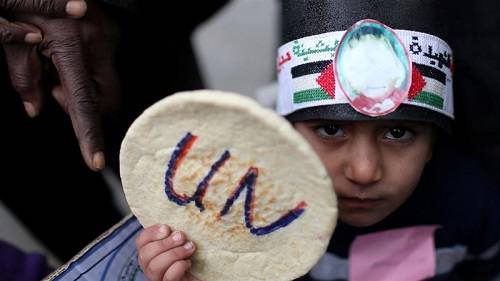 For seven decades the UN has failed to fulfill its original mission. Israel is the epitome of this grand failure.

The United Nations sits on First Avenue, just off of 41st Street, overlooking the East River in New York City. It opened to great applause and expectation. A wishful answer to the madness that had become a world unleashed with the scent of blood and the all too customary wail of mourn.

It was to be our collective hope. A grand oath by which, together, the world could find answers to the greed and arrogance of states long unbound in their historical feed upon those less powerful. It has not worked.

Founded in San Francisco on October 24, 1945, the UN opened with endless promise. As proclaimed in its lofty preamble, the original 51 member states committed themselves to saving "succeeding generations from the scourge of war ... [reaffirmed] ... faith in fundamental human rights, in the dignity and worth of the human person, in the equal rights ... of nation's large and small ... to establish conditions under which justice and respect for the obligations arising from ... international law [could] be maintained ... to ensure... that armed force [would] not be used, save in the common interest."

With all too comfortable ease, 73 years later, these passionate words of humanity have once again proven themselves to be little more than idle chatter in which the powerful not only craft the tone of the debate, but set about to ensure its content reflects their unique and predatory vision of the rule of law.

In what has become a political art form of pain and punishment, with repeated rerun a handful of powers have used their veto to ensure that the Security Council (UNSC), the UN's most empowered organ, is long on vent, but short on action.

In first place stands Russia/Soviet Union which has used its veto 112 times- more than any other permanent member of the UNSC. Most recently, on April 10, 2018, Russia blocked a resolution to identify who was responsible for the alleged chemical weapons attack in Douma in Syria. To date, since the conflict began in 2011, Russia has used its veto 12 times regarding Syria. Earlier, it vetoed a Security Council condemnation of its annexation of Crimea in 2014.

In second place stands the United States. It has exercised its veto power some 80 times to date. Since 1982, the grand protector of Israel has vetoed 36 UNSC resolutions critical of it, more than the total number of vetoes cast by all the other UNSC members.

Most recently, it vetoed a resolution proposed by Kuwait condemning Israeli attacks upon thousands of Palestinians during the Great March of Return that called for an independent investigation into mass killings and injuries that have ensued. On December 18, 2017, it vetoed a draft resolution approved by 14 of the 15 members of the Security Council urging countries to refrain from establishing embassies in Jerusalem.

In its most basic form, the veto power ensures that permanent members of the UNSC can, as they choose, prevent any collective UN action whether a diplomatic or armed response to an international crisis, thus sacrificing the will of the world community to their own narrow geopolitical programme.

UN inaction, or sanctioned violence, has long betrayed any meaningful effort to serve as the world's neutral arbiter to ensure equal and just application of international law and the pursuit of world peace.

While examples of meaningless, indeed failed, political debate abound, one, in particular, exposes the UN as little more than an excuse for yearly September get-togethers of world leaders.

No state has offended, with such brazen regularity and uniform betrayal, the core principles of the UN than has Israel, established on stolen Palestinian land.

Decades of ethnic cleansing in Palestine

Since literally its first day, when the UN announced to the world that Palestine was relegated to history and Israel crafted as a Middle East extension of Europe, this state has flaunted international law in its march of ethnic cleansing.

With mayhem its mantra even before its artificial declaration of statehood, Israel's Zionist framers never blinked at the use of unbridled terror to obtain their goal. The bombing of the King David Hotel, in 1946, by the Irgun, a UK-designated terrorist organization, took the life of 91 mostly civilians.

While this massacre and the assassination of UN mediator Folke Bernadotte, in Jerusalem in 1948, by the group Lehi, momentarily captured the eye of the world, little was known about the decade of horror that both Palestinians and British had lived at the hands of Zionist militias.

During this period, Palestinians and British police and military personnel were injured or assassinated by explosives, snipers or lynching. Jewish terrorists attacked infrastructure, en masse, as they robbed banks and bombed military and police installations, government offices, and ships. They sabotaged railways, bridges, and oil installations using booby traps, ambushes and vehicle blasts with the kind of cold detached execution that the world would once again see just this past month not from the Irgun, but from its heir - the Israeli military.

There is no need to recast, in full, the nightmare that has befallen tens of thousands of unarmed Palestinian demonstrators over the last several weeks in Gaza, leaving 45 dead and thousands injured. By now, the massacre has been well recorded.

Not surprisingly, most killed or injured suffered gunshot wounds to the rear of their heads or backs. In the parlance of forensic science, these entry wounds are consistent not with attack but flight.

Civilian massacres are, of course, very much an essential part of the Israeli historical narrative. A walk down its memory lane shows an unbroken pattern of carnage perpetrated upon the most vulnerable of its enemies, real or imagined.

In the winter of 2008-2009, Israel launched a massive assault on Gaza. Within the first 9 hours, it dropped more than 100 tons of explosives on the strip.

In the days to come, tens of thousands of its civilians were exposed to white phosphorous shells fired into crowded residential areas, not as incidental cover to otherwise legitimate use of force, but rather as a primary weapon of war in violation of international law.

Such shells struck the main Gaza compound of the United Nations Relief and Works Agency (UNRWA) where some 700 civilians had taken shelter, causing numerous deaths and injuries.

On the day before the hostilities ended, three phosphorous shells landed in another clearly marked UN facility, one of which setting a classroom on fire and killing two brothers as they slept. As with all other UN facilities, Israel had advance notice of its coordinates.

White phosphorus produces horrific burns. It sticks to the skin of its victims, penetrating their bodies resulting in liver, heart and kidney damage and, in some cases, multiple organ failures. White phosphorus burns unless deprived of oxygen or until it is completely exhausted.

Throughout the attack, Israel fired some 7,000 dual-purpose improved "conventional" artillery shell designed to avoid international prohibitions against the use of traditional cluster bombs.

Intended as an anti-armor and antipersonnel weapon, each artillery shell explodes into hundreds of smaller fragments within a 100m radius, killing and wounding indiscriminately. One example of their destructive potential was a January 6 attack near an UNRWA school in Jabaliya, which killed 43 Palestinians. On that occasion, Israel acknowledged the use of the shells.

The UN Fact-Finding Mission on the Gaza Conflict ruled that these attacks constituted violations of international human rights and humanitarian law as well as possible war crimes and crimes against humanity. The Israeli assault killed some 1,400 Palestinian men and women, including hundreds of children.

South African Jurist Richard Goldstone, a former international war crimes prosecutor and member of the UN team that issued the report, described the Israeli conduct as "a deliberately disproportionate attack designed to punish, humiliate and terrorize a civilian population, radically diminish its local economic capacity both to work and to provide for itself, and to force upon it an ever increasing sense of dependency and vulnerability."

With the Obama administration taking the lead in defense of Israel, the UN took no steps to hold it accountable for repeated violations of international law during the massacre.

Five years later, Israel struck once again as it launched another war on Gaza with massively disproportionate force.

According to a UN report, "the scale of the devastation was unprecedented" with more than 6,000 air strikes and 14,500 tank shells and 35,000 artillery shells fired.

Many of these explosive devices were used in densely populated areas and designed to have a "wide-area" impact to ensure that anyone or anything within the contact area would likely be killed, injured or damaged due to their explosive power and imprecision.

One non-governmental organization reported a 533-percent increase in the use of highly explosive artillery shells in comparison to the previous Israeli assault on Gaza.

As noted by the UN, haphazard strikes in densely populated neighborhoods, on residential buildings, the use of explosives with wide-area effects and the destruction of entire neighborhoods in Gaza likely constituted a violation of the prohibitions of indiscriminate attacks against civilians and was, therefore, a war crime.

When Israel's thirst for retribution was at last satisfied, 2,256 Palestinians were killed, the majority of them civilians, including 538 children and 308 women. More than 11,000 others were wounded, a third of them children, with over 1,000 left permanently disabled.

Many of those killed or maimed were targeted while seeking refuge in various shelters, including UN schools. Twenty civilians lost their lives and dozens more injured in an overnight attack on the Jabaliya elementary school where more than 3,000 displaced civilians had sought refuge. Like during the previous war, Israel had the coordinates of the UN sites.

Criminal not just for the loss of life, the concentrated Israeli onslaught was designed to cause lasting devastation on a community already overwhelmed by poverty and still reeling from the last major assault on its infrastructure just a few years earlier.

The Israeli army damaged or destroyed 235 schools and 73 health. Thousands of homes, hundreds of factories and farms were totally levelled. The lone power station and a major sewage pipe in Gaza were destroyed.

Approximately six weeks after Israel launched its assault, the Human Rights Council of the UN held an emergency session regarding the bloodbath in Gaza.

In the strongest of terms, a resolution was passed which, in relevant part, condemned "the widespread, systematic and gross violations of international human rights and fundamental freedoms arising from ... the latest Israeli military assault on the occupied Gaza Strip, by air, land and sea, which has involved disproportionate and indiscriminate attacks, including aerial bombardment of civilian areas, the targeting of civilians and civilian properties in collective punishment contrary to international law and other actions, including the targeting of medical and humanitarian personnel, that may amount to international crimes."

Though the resolution called for an immediate ceasefire, predictably, it was ignored by Israel. Only one country voted against the resolution - the United States.

Although an investigation into the massacre of 2014 is currently under way at the International Criminal Court, to date, the UN itself has undertaken no affirmative steps nor imposed any sanctions against Israel.

The views expressed in this article are the author's own and do not necessarily reflect Al Jazeera's editorial stance.

A Palestinian child holds bread during a protest against aid cuts, outside the United Nations' offices in Khan Younis in the southern Gaza Strip on January 28, 2018 [Reuters/Ibraheem Abu Mustafa]