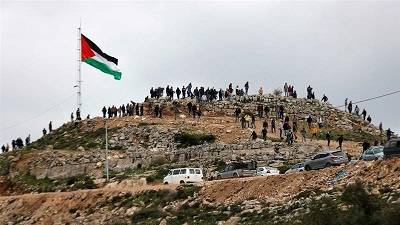 On Wednesday, US Secretary of State Mike Pompeo said in a news briefing that annexation of the West Bank was ultimately an "Israeli decision" and that that the United States would share their views on this matter with Israel privately. His remarks came a just two days after a new Israeli unity government was ushered in following a deal between incumbent Israeli Prime Minister Benjamin Netanyahu and his political rival and head of the Blue and White alliance, Benny Gantz.

As part of the agreement, Netanyahu will serve as prime minister for another 18 months, after which, Gantz will supposedly take over. It will also allow him to pass legislation to annex large swaths of the West Bank from July 1.

The annexation of Palestinian land occupied in 1967 is illegal under international law, yet the reality is that the occupation of the West Bank has been de facto annexation. The Israeli regime is now looking to extend its sovereignty through de jure annexation which would put much of the West Bank under Israeli law, leaving only a few small pockets of densely populated Palestinian bantustans.

Many Liberal Zionists saw Gantz's Blue and White coalition as a viable alternative to the corrupt reign of Netanyahu, while many foreign diplomats hoped he would be a "partner for peace". This despite the fact that Gantz made it clear that he was going to pursue annexation throughout his election campaigns.

In response to the unity government's declared annexation position and Pompeo's comment, several EU member states warned and "strongly advised" against Israeli annexation of Palestinian land in the West Bank. Meanwhile, Jordan has also repeatedly stated that it "rejects" steps towards annexation.

These most recent condemnations follow a familiar pattern of weak statements being issued whenever the Israeli regime breaches international law, with no threat of repercussions. Indeed, committing war crimes is always an Israeli decision, and the response of the international community is always to ignore them.

The fact that Israeli political leaders across the political spectrum are pursuing annexation is hardly surprising. Expansionism into Palestinian land is the raison d'etre of the Israeli regime and has been since its foundation. Israeli settlement building has never ceased since 1948 when the ethnic cleansing of historic Palestine began. And it was a so-called left-wing Israeli government that spearheaded the settlement enterprise in the West Bank and Gaza following their occupation in 1967.

The Palestinian leadership reacted to these latest developments with more of the same fiery rhetoric and empty threats. Palestinian Authority (PA) President Mahmoud Abbas once again threatened to "completely cancel" agreements with Israel and the US if Israel proceeded with annexation and warned that Palestinians would "not stand hand-cuffed".

With the PA highly dependent on the international donor community and the Israeli government for its survival, it is unlikely it will ever be able to present a real challenge to annexation. Decades of capitulation discussions dressed up as "peace negotiations" have left Palestinians in this historically vulnerable situation.

Indeed, despite the PA president's bravado, Palestinians are already "hand-cuffed" and caged in an open-air prison where even Abbas himself has to request permission from the Israelis to leave Ramallah. Further, the COVID-19 pandemic has put Palestinians under lockdown, living in acute fear of infection and unable to put up a significant challenge to the Israeli takeover of their land.

This, however, does not mean the Palestinian people have given in. The struggle against the Israeli regime continues, as do attempts to hold it accountable and make it pay the economic and legal cost of oppression, through the BDS Movement and the International Criminal Court investigation into its war crimes.

This is all important but it is not enough. Now is the time for a refocusing of efforts and a change in political strategy. Palestinians have to clean up their own house and demand new representative and legitimate leadership which no longer bows down to an international community enabling Israeli expansionism. While elections are an important democratic practice, in the West Bank and Gaza they would only serve to prop up the current authorities.

What is required is a complete overhaul of the current political system which, for over the last two decades, has been focusing solely on keeping Palestinians subdued and contained. Such an overhaul requires a return to a revolutionary consensus achieved through plurality and reconciliation of political groups, geographic fragments, and collectives and a popular mobilisation around a political agenda of liberation. Only then will we stand a chance to stop the theft of Palestinian land.

Palestinian demonstrators gather on a hilltop during a protest against Israeli settlements in the town of Beita in the occupied West Bank on March 2, 2020 [File: Reuteres/Mohamad Torokman]