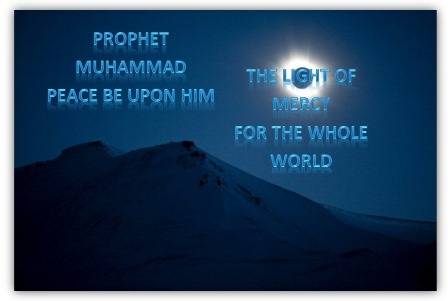 the Master of Prophets, was born in Bani Hashim lane in Makkah on Monday morning, the ninth of Rabi‘ Al-Awwal, the same year of the Elephant Event, and forty years of the reign of Kisra (Khosru Nushirwan), i.e. the twentieth or twenty-second of April, 571 A.D., according to the scholar Muhammad Sulaimân Al-Mansourpuri.

Ibn Sa‘d reported that Muhammad’s mother said: "When he was born, there was a light that issued out of my pudendum (genital organs) and lit the palaces of ." Ahmad reported on the authority of ‘Arbadh Ibn Sariya something similar to this.

It was but controversially reported that significant precursors accompanied his birth: fourteen galleries of Kisra’s palace cracked and rolled down, the Magians’ sacred fire died down and some churches on sank down and collapsed.

His mother immediately sent someone to inform his grandfather ‘Abdul-Muttalib of the happy event. Happily he came to her, carried him to Al-Ka‘bah, prayed to Allah and thanked Him. ‘Abdul-Muttalib called the baby Muhammad, a name not then common among the Arabs.

The first woman who suckled him after his mother was Thuyebah, the freed slave of Abu Lahab, with her son, Masrouh. She had suckled Hamzah Ibn ‘Abdul-Muttalib before, and later Abu Salamah Ibn ‘Abd Al-Asad Al-Makhzumi.

It was the general custom of the Arabs living in towns to send their children away to bedouin wet nurses so that they might grow up in the free and healthy surroundings of the desert whereby they would develop a robust frame and acquire the pure speech and manners of the bedouins, who were noted both for purity of their language and for being free from those vices which usually develop in sedentary societies.

lived under her care. Ibn Ishaq states that Haleemah narrated that she, along with her husband and a suckling babe, set out from her village in the company of some women of her clan in quest of children to suckle. She said:

It was a year of drought and famine and we had nothing to eat. I rode on a brown she-ass. We also had with us an old she-camel. By Allah we could not get even a drop of milk. We could not have a wink of sleep during the night for the child kept crying on account of hunger. There was not enough milk in my breast and even the she-camel had nothing to feed him. We used to constantly pray for rain and immediate relief. At length we reached Makkah looking for children to suckle. Not even a single woman amongst us accepted the Messenger of Allâh

offered to her. As soon as they were told that he was an orphan, they refused him. We had fixed our eyes on the reward that we would get from the child’s father. An orphan! What are his grandfather and mother likely to do? So we spurned him because of that. Every woman who came with me got a suckling and when we were about to depart, I said to my husband: "By Allâh, I do not like to go back along with the other women without any baby. I should go to that orphan and I must take him." He said, "There is no harm in doing so and perhaps Allah might bless us through him." So I went and took him because there was simply no other alternative left for me but to take him. When I lifted him in my arms and returned to my place I put him on my breast and to my great surprise, I found enough milk in it. He drank to his heart’s content, and so did his foster brother and then both of them went to sleep although my baby had not been able to sleep the previous night. My husband then went to the she-camel to milk it and, to his astonishment, he found plenty of milk in it. He milked it and we drank to our fill, and enjoyed a sound sleep during the night. The next morning, my husband said: "By Allah Haleemah, you must understand that you have been able to get a blessed child." And I replied: "By the grace of Allah, I hope so."

The tradition is explicit on the point that Haleemah’s return journey and her subsequent life, as long as the Prophet

stayed with her, was encircled with a halo of good fortune. The donkey that she rode when she came to Makkah was lean and almost foundered; it recovered speed much to the amazement of Haleemah’s fellow travellers. By the time they reached the encampments in the country of the clan of Sa‘d, they found the scales of fortune turned in their favour. The barren land sprouted forth luxuriant grass and beasts came back to them satisfied and full of milk. Muhammad

stayed with Haleemah for two years until he was weaned as Haleemah said:

We then took him back to his mother requesting her earnestly to have him stay with us and benefit by the good fortune and blessings he had brought us. We persisted in our request which we substantiated by our anxiety over the child catching a certain infection peculiar to Makkah. At last, we were granted our wish and the Prophet

stayed with us until he was four or five years of age.

When, as related by Anas in Sahih Muslim, Gabriel came down and ripped his chest open and took out the heart. He then extracted a blood-clot out of it and said: "That was the part of Satan in thee." And then he washed it with the water of Zamzam in a gold basin. After that the heart was joined together and restored to its place. The boys and playmates came running to his mother, i.e. his nurse, and said: "Verily, Muhammad

has been murdered." They all rushed towards him and found him all right only his face was white.

After this event, Haleemah was worried about the boy and returned him to his mother with whom he stayed until he was six.