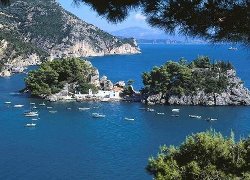 This is a conversation that took place between Moosa ibn Nusayr

and the caliph of his era:

The Caliph: "What do you resort to at times of difficulty during war?"

Moosa: "I trust in Allah and offer prayers to Him."

The Caliph: "Do you use castles or ditches (to protect yourself and your army)?"

The Caliph: "What do you do then?"

Moosa: "I always fight out in the plains and am alert and patient. I protect myself by the sword, seek help from Allah, and pray to Him for victory."

Moosa: "O leader of the Faithful! I have never faced defeat - from the age of forty, until now, when I am eighty."

It is a well-known fact that whenever the Islamic conquest of Spain is mentioned in Islamic history, two names jump to mind: Tariq ibn Ziyad and Moosa ibn Nusayr

. But who was this Moosa ibn Nusayr, who was not defeated even once in forty years?

was born to an Arab tribe that lived on the borders of the Persian Empire, west of the Euphrates, before the advent of Islam. His father Nusayr lived near Al-Madeenah in the Hijaz (a region in Western Arabia on the Red Sea coast), from the time of his reversion to Islam. Therefore, Moosa ibn Nusayr

was born in the cradle of Islam in 19 A.H. during the reign of 'Umar ibn Al-Khattab

spent his formative years at Al-Madeenah, learning the religion of Islam from the immediate disciples of Prophet Muhammad

. We are told that he was, in fact, considered to be of the second generation of early Muslims who met or accompanied some of the companions of the Prophet

and who also were narrators of certain prophetic traditions. This schooling in semi-formal education along with staying within the society of the companions of Prophet Muhammad

during the formative years of his life had a lasting impression on him. He was therefore, in a way, an extension of the first generation of the heroes of Islam, heroes like Khalid ibn Al-Waleed, Sa'd ibn Abi Waqqas, Abu 'Ubaydah ibn Al-Jarrah and 'Amr ibn Al-'Aas

and many other companions of the Prophet

Later, when the governor of Syria, Mu'awiyah ibn Abu Sufyan

and his father, chose our hero's father for a head-guard, our hero was exposed to further education. This time it was education in political and military leadership, for Moosa

was in constant contact with Mu'awiyah during the latter's military campaigns and political conflicts. But as a conscientious Muslim, Nusayr (our hero's father) refused to join Mu'awiyah

in his campaign against Caliph 'Ali ibn Abi Talib

despite the fact that he was a protégé of Mu'awiyah. This courageous act of our hero's father must have left a great impression on Moosa

had his military training in Syria. In fact, he was fifteen years old when Mu'awiyah led the second naval campaign in the history of Islam in 33 A.H. He must have observed very closely the preparations for that new type of warfare. Moosa

had the honour of participating in the later battles at sea against the highly sophisticated Roman navy that attacked the newly liberated lands on the eastern shores of the Mediterranean Sea.

During the reign of Marwan ibn Al-Hakam

which started in 65 A.H, Moosa

was chosen by the Umayyad Caliph's son 'Abdul-'Azeez ibn Marwan

who appointed him a chief adviser when he himself was appointed governor of Egypt. Moosa's help was called for in Iraq where he spent some time helping another son of the Caliph.

Fortunately, for humanity and for Islamic history, Moosa

returned to Egypt in 75 A.H., thus beginning a new era in his life and the lives of millions of people in North Africa and the Iberian Peninsula.

Naturally, a great portion of North Africa had already been liberated from the Roman control many years earlier by the swift sweeps of the great 'Uqbah ibn Nafi'

who built the fortress of Qayrawan in Tunisia for that purpose. But it seemed that much work was needed to bring stability to the area, especially because there were still many pockets for the Romans and their supporters along the coastal area, from where the Muslim armies and settlements were constantly attacked.

who was chosen for the task of bringing peace and stability to the region of North Africa that was mostly inhabited by Berbers, who were accustomed to a very different pattern of political and administrative life. He was chosen Governor of Qayrawan (in Tunisia) in 85 A.H.