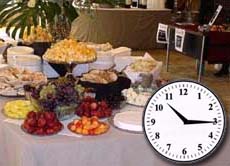 The following acts, when done knowingly and deliberately in the days of Ramadan, will invalidate the fast. In addition to being considered great sins, a person committing one of these acts will have to continue fasting the rest of the day that he/she committed it, and he/she is also required to take certain measures of reconciliation as indicated below.

1-Intentional eating, drinking
Allah Says (what means): "And eat and drink until the white thread of dawn becomes distinct to you from the black thread [of night]. Then complete the fast until the night [i.e. sunset]." [Quran 2:187].
This applies to the one who does so consciously. However, if a person eats or drinks forgetfully or accidentally or is forced to do it, the fasting is intact and the day is not to be made up; and the person should continue fasting.
Abu Hurayrah

said: "Whoever forgets he is fasting, and eats or drinks is to complete his fast, as it is Allah Who fed him and gave him something to drink." [Al-Bukhari, Muslim and others]
Ibn Abbas

said: "Allah has excused for my Ummah (Muslim community) mistakes, forgetfulness and what they are forced to do." [At-Tahawi, Al-Hakim and Ad-Daraqutni]
Similar to eating and drinking is smoking (besides being prohibited in itself) and letting any substance into the stomach.
However, if a person eats or drinks out of forgetfulness, then he/she should continue fasting, and the day fasted is valid and counted and does not need to make up the day. This is based on the Hadeeth (narration) in which the Prophet

said: "If somebody eats or drinks forgetfully then he should complete his fast, for what he has eaten or drunk, has been given to him by Allah." [Al-Bukhari]
Similarly, if a person breaks the fast before the actual Maghrib (sunset) or after Fajr (dawn) because of a mistake in time recognition, he is not to make up that day.
2-Sexual intercourse
Just like eating and drinking, Allah has forbidden sexual intercourse during the days of Ramadan. Almighty Allah Says (what means):
"It has been made permissible for you the night preceding fasting to go to your wives [for sexual relations]. They are clothing for you and you are clothing for them. Allah knows that you used to deceive yourselves, so He accepted your repentance and forgave you. So now, have relations with them and seek that which Allah has decreed for you [i.e. offspring]. And eat and drink until the white thread of dawn becomes distinct to you from the black thread [of night]. Then complete the fast until the night [i.e. sunset]. And do not have relations with them as long as you are staying for worship in the mosques. These are the limits [set by] Allah, so do not approach them. Thus does Allah make clear His verses [i.e. ordinances] to the people that they may become righteous." [Quran; 2:187]
Muslim scholars differ about stimulating oneself [whether alone or with his wife or vice versa], without intercourse, to the point of ejaculation. Some of them treat it as complete intercourse, while others say that it does not invalidate the fast even though it causes a loss of its rewards.
3-Intentional vomiting
Abu Hurayrah

said: "Whoever is overcome by vomiting is not to make up the day. Whoever vomits intentionally must make up the day." [Ahmad and others]
4-Poor Intentions
These last two actions are related to the heart and to the intention which is an essential element [or pillar] of fasting. These actions void the fast even if the person does not actually eat anything. This is because the intention is one of the pillars of the fast and, if one changes his/her intention, he/she has nullified his/her fast.
Except intercourse, a day invalidated by such an action cannot be atoned by even fasting the whole life. Thus, in addition to the making up the day, the only way to atone such an act is by true and sincere repentance and strong determination never to do it again.
The only action, according to most scholars, which requires that both the day be made up and the act of expiation be performed is having sexual intercourse during a day of Ramadan.
Abu Hurayrah

reported that a man came to the Messenger of Allah,

, and said: "I am destroyed, O Messenger of Allah!" The Prophet,

, asked: "What has destroyed you?" He said, "I had intercourse with my wife during a day of Ramadan." The Prophet,

, asked: "Is it possible for you to fast for two consecutive months?" He said, "No." The Prophet,

, asked: "Is it possible for you to feed sixty poor people?" He said, "No." The Prophet,

, said: "Then sit. "A basket of dates was brought to the Prophet,

, and he said to the man: "Give this in charity." The man said: "To someone poorer than us? There is no one in this city who is poorer than us!" The Prophet,

, laughed until his molar teeth could be seen and said: "Go and feed your family with it." [Al-Bukhari, Muslim and others]
Most scholars say that both men and women have to perform the acts of expiation (Kaffarah) if they intentionally have intercourse during a day of Ramadan on which they had intended to fast.
5-Injections containing nourishment
Though this type of action is committed intentionally and thus falls under intentional eating and drinking, it is not considered as a sin if given to a sick person in need of it. All what is needed is to make up the day later. These injections are meant to give nourishment intravenously so that it reaches the intestines, with the intention of nourishing the sick person. Also if the injection reaches the blood-stream then it likewise breaks the fast since it is being used in place of food and drink. Similar is the use of drips containing glucose and saline solutions, and inhalers used by people sick of asthma. May Allah relieve all sick believers.
Involuntarily events that break the fast
The fast is disrupted (and there is no point or reward then in continuing to fast) when a woman sees the blood caused by either of:
1-Menstruation
2-post-childbirth bleeding
Even if such bleeding begins just before the sunset, the fast of that day is rendered invalid. A woman in this case will have to fast a day later for every day (or part of day) that she missed.
If a menstruating woman becomes pure (ceases bleeding) before dawn, then she takes her Ghusl (purifying shower) and intends to fast the next day. However, if she becomes pure after Fajr (dawn) then she takes her Ghusl, and starts praying as usual, and the day has to be made up after Ramadan. She may eat and drink during that day as it is an invalid day as Shaykh Ibn 'Uthaymeen

, said: "Is it not that when she [the woman] menstruates, she does not pray nor fast?" We (present companions) said: Yes indeed. He said: "That is the deficiency in her Deen [religion]". [Muslim]
The order to make up for the days of menstruation is reported in the lesson `Aa'ishah,

, gave to Mu`aath, may Allah be pleased with him, who came and asked her "Why is it that the menstruating woman has to make up her fasts but not the prayers?" …`Aa'ishah said: "That (menstruation) used to come upon us and so we were ordered (by the Prophet, slallallaahu alayhi wa sallam, to make up the fasts and were never ordered to make up the prayers." [Al-Bukhari and Muslim]