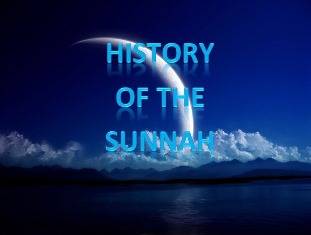 in preserving the Sunnah into the following seven categories: prudence in narrating the hadeeths, verification and substantiation of the hadeeths before accepting them, critique, discussions and assessment of the narration, traveling for search and confirmation of the hadeeths, memorization, practice and writing of the hadeeths. Some scholars refer to these aspects as ‘rulings’, ‘methods’ or ‘ways’ instead of methodology.

1- Prudence in narrating the Hadeeth:

Because of the fact that the Sunnah is a revelation and a sacred Source for this religion, the Companions

were very careful when narrating what the Prophet, sallallaahu alayhi sallam, said or did. This vigilance was illustrated in:

·        Avoiding narration unless they had to. ‘Abdur-Rahman Ibn Abi Layla

said: “I have met with 120 Companions

from the Ansar (supporters of the Prophet

), none of whom would narrate a hadeeth or answer a question of fatwa unless he absolutely had no choice but to do it. One would have to go and ask another instead of him, so much so you would keep going from one to the other until you get back to the first one you asked.” They

and that people see it as such, thus everyone wanted the other to do that because they may know it better. This, however, should not be construed to mean they avoided spreading the message or teaching Islam to others. This prudence indicates they were fully aware of their role and its significance. They would rather let others, who may be more knowledgeable, do the job, but once they had to do, they did it in the best way possible.

·        Limiting or discouraging the narration. This attitude was adopted for the purpose of protecting the Sunnah because it minimizes the possibility of mistakes or forgetfulness that may otherwise cause people to doubt the Sunnah or mistrust the narrators. This trend was strongly encouraged by Caliphs Abu Bakr and ‘Umar Ibn Al-Khattab

and was accepted and practiced by the Companions

. This attitude is founded on the famous hadeeth narrated by many Companions

: “It is sufficient —for one to tumble into lying - to narrate or repeat everything he/she hears.” [Al-Bukhari and others]

. To strike a necessary balance between being cautious and insuring the transmission of the religion and the spreading of its teachings, the Companions, may Allah be pleased with them, who had a great deal of knowledge—like those recommended by the Prophet

—never hesitated to narrate, write or teach the Sunnah. There are hundreds of narrations that encourage such practice so long as it is done in the right manner.

·        Opting for verbatim narration. Guided with instruction in the Hadeeth, “May Allah  bless the person who hears a statement from me and conveys it as he/she heard it,” the Companions

. There are many reported incidents, which testify to this fact. Having such natural mastery of the Arabic – that was common among them—and the fact that they

saw and heard the Prophet

say, do and explain to them his teachings repeatedly, as well as their understanding of the need for verbatim transmission of narrations, all combined to make it easy for them not to cause changes as they narrate any Hadeeth.

2- Verification of the Hadeeth before accepting it

This is an important tool that the Companions

established to safeguard the Sunnah against any foreign material interference and accidental or deliberate mistakes. This was a common prac­tice amongst all of the Companions

when receiving or narrating the Sunnah. Imam Ath-Thahabi

mentioned this practice, in one of his great books, addressing the issue of Hadeeth Memorizers. He

to protect the Hadeeth. For example, Abu Bakr

was asked to rule in the case of a grandmother who came asking for her right in inheritance, he

said that he knew of no amount due to her neither in the Book of Allah (i.e., Quran) nor the Sunnah of the Prophet

told that he has wit­nessed the Prophet

give one-sixth of the total amount of the inheritance, he

asked him if he had witness to substantiate this claim. And when Muhammad Ibn Maslamah

witnessed to the truth of that figure, Abu Bakr

accepted it and gave the grandmother exactly that.

In the case of ‘Umar Ibn Al-Khattab

mentioned many incidents that testify to the fact that he

always ascertained the narration when it was necessary to do so. He

: “I ask by Allah, Who maintains the Heaven and Earth! Did you hear the Prophet

say: ‘I am not to be inherited, whatever I leave is to be given in charity'? They said: `Yes, Allah is our witness.” [Ahmad]

After narrating the above incidents among others, Imam Ath-Thahabi

rather they were necessary to establish a standard of care and respect for what the Prophet, sallallaahu alay­hi wa sallam, said or did. They

did that for themselves and to institute a tradition to be fol­lowed and honored by all who come after them.

In summary, it is essential to note the following about this method:

- The purpose was to protect the Sunnah, not to doubt one another. All of the Companions

are trustworthy as clearly stated in the Quran, and doubting their trustworthiness can certainly damage one's faith.

- The purpose, also, was to establish a method and set an example to be followed by the rest of the Muslim nation. The truth, however, remains that Companions

used to accept narration conveyed by any one of them. Their request of witnesses or that the narrator gives an oath that he is saying the truth was to establish the methodology, so that people would not take narrating a Hadeeth lightly. This fact may further be supported when considering that:

. This variation indicates that the purpose was actually to establish awareness of the significance of narrating the Hadeeth rather than set up a requirement of having more than one narrator as a condition for its authenticity.

- There are a very large number of narrations, which indicate that in many cases the Companions

had actually accepted Hadeeth from one narrator without seeking any substantiation or verification.