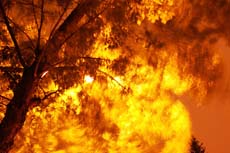 We have received many questions from Muslims who live in the west in this regard; the following are two examples:

·        I live in . My sister has a bisexual boyfriend and does not see any problem in this; she even goes with him to a gay nightclub. She also believes that we should accept this type of person in our community. What should I do?

·        I discovered that my forty year old husband has been, for the past two years, sleeping with a boy who comes to our house occasionally, although he does not know that I have found out. He is a person who performs his prayers and confirms that he is sexually satisfied by me. What should I do?

Dear brothers! This is a married man who is committing this wicked sin! How perverted can a person get? How heedless can a person become? Indeed he is cursed by Allah as the Prophet

said: “Allah has cursed the one who commits the act of the people of Loot (i.e. sodomy).” [Ahmad]

The Islamic ruling on sodomy:

The consensus of the Companions, may Allah be pleased with them, has been recorded in this regard that the one who commits this sin must be executed. However, there are variant views from them on how to execute the perpetrator. Some of them ruled that it should be by beheading him with a sword, others ruled that it be by stoning to death, while a third group held the opinion that it should be by burning to death. There is another group that has ruled that it should be done by taking the perpetrator of this evil crime to the highest point in the area he resides, and then hurling him off from there, head down, while being stoned as he falls and after he hits the ground, until he dies; this was the opinion of Abu Bakr, may Allah be pleased with him, and ‘Ali, may Allah be pleased with him. There is also a view that such people should be executed by placing them in a house that is then demolished with them inside it.

said: “Kill the one who does it (i.e., sodomy) and the one to whom it is done.” [At-Tirmithi & Others] Shaykh Bakr Abu Zayd, may Allah preserve him, said: “There is no indication in the narration of the person being single or married, and thus it covers all people.”

How are such sinners to be dealt with?

The one who commits this grave sin must repent before death strikes him, as he would otherwise be subject to the wrath and curse of Allah, as well as the loss of both, this life and the Hereafter.

He must be advised and reminded that Allah is watching him and that Satan is keen to misguide him. He should remember that one day he may become a father who would despise anyone attacking his children in this way.

said: “Sodomy brings nothing but regret, sorrow and diseases that are almost impossible to survive. It also makes one's countenance dark and gloomy, and causes the light of guidance to vanish from his heart. It (i.e., sodomy) becomes so evident on his face that people would recognize this as soon as they see him. The one who commits this sin will never survive the punishment that will follow unless Allah has predestined for him to repent. It results in the blessings of Allah upon him vanishing and being replaced by curses and hardships. It also makes him more daring in committing more evil and shameful deeds, and thus causes his humiliation.”

Modern science has proved that this act has a very negative effect on those who do it, such as damaging the nervous system, the brain, and the sexual organs, as well as causing liver infections, which is in addition to AIDS.

How does a person repent from this sin?

·        Sincere repentance and remaining steadfast upon it.

Whenever the slave sincerely repents to Allah and continues supplicating to Him for forgiveness, Allah will certainly protect and preserve him. Imaam Ibn Taymeeyyah

was asked whether the one who repents from this act must inform others, his reply was: “If he truly repents, Allah will forgive him without him having to publicize his act.”

Allah Says (what means): “And those who do not invoke with Allah another deity or kill the soul which Allah has forbidden [to be killed], except by right, and do not commit unlawful sexual intercourse. And whoever should do that will meet a penalty. Multiplied for him is the punishment on the Day of Resurrection, and he will abide therein humiliated – Except for those who repent, believe, and do righteous work. For them Allah will replace their evil deeds with good. And ever is Allah Forgiving and Merciful. And he who repents and does righteousness does indeed turn to Allah with [accepted] repentance.” [Quran 25: 68-71].

Additionally, one may get married after sincerely repenting in order to protect himself from sinning further.