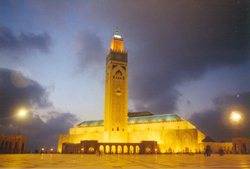 I wiped away his tears with my hands and held his hand. I wanted to take him to the mosque by car but he refused, arguing that it was close by and that he wanted to walk to the mosque. I felt ashamed because I could not even remember the last time I had entered the mosque. However, it was the first time I was feeling fear and regret for my negligence over the past years.

The mosque was full of worshippers, but I managed to find a place for Saalim in the first row. We listened to the Friday Khutbah (sermon) together and he prayed beside me; actually, no, I prayed beside him.

After the end of the prayer, Saalim asked me to hand him a copy of the Quran. I was surprised: how could he read when he was blind?
I was about to ignore his request, but I responded for fear of hurting his feelings. I handed him the copy of the Quran.

He asked me to open it and get the beginning of Chapter Al-Kahf. I kept on turning the pages one time and searching for the page number in the index another time until I finally found it.

He took it from me, put it before him and started to recite the Chapter while his eyes were closed. He had memorized the whole Chapter!

I was ashamed of myself. I picked up another copy of the Quran.

There were still some people at the mosque performing the voluntary prayer. I was embarrassed and tried to hold back my tears, but my crying turned into weeping and sobbing.

I did not feel a small hand touching my face and wiping away my tears. It was Saalim. I embraced him, looked at him and said to myself: "You are not the blind; rather, I was the blind one when I followed some dissolute persons who were dragging me to Hell."

We returned home to my wife, who was very worried about Saalim. Her worry turned into tears of joy when she came to know that I had performed the Friday prayer with Saalim.

From that day on, I did not miss any congregational prayer in the mosque. I deserted my bad companions and had righteous companions whom I befriended at the mosque. I tasted the sweetness of faith with my new friends and learnt things from them that I had been too preoccupied by worldly pleasures to know. I never missed a gathering of knowledge or a Witr prayer and completed the recitation of the Quran many times within one month, by the grace of Allah The Almighty. I kept my tongue often busy with remembrance of Allah The Almighty, hoping that He would forgive me for past habit of backbiting and mocking people. I felt that I got closer to my family. The look of fear and pity that always loomed in my wife's eyes disappeared.

Now, a smile never leaves Saalim’s face. Anyone who sees him would feel as if he owns the whole world with everything in it. I praised Allah The Almighty so much for His favors.

One day, my righteous friends decided to visit a remote area in order to give Da‘wah. I was hesitating about going with them. I performed the Istikhaarah prayer and consulted my wife. I had expected that she would refuse but her answer was the opposite!

She was very happy and even encouraged me. She used to see me traveling for dissolute purposes to commit lewd acts in the past without consulting her. I went to Saalim and told him that I was going away for a few days, and he embraced me with his small arms and bid me farewell. I left home for three months and a half. During that period, I used to call my family whenever I had the chance. I missed them so much! I missed Saalim so much!

I wished to hear his voice. He was the only one who I could not speak with since I had traveled for he was either in school or the mosque whenever I called them.

Whenever I told my wife how I missed him, she laughed from sheer joy and happiness. The last time I called her, however, she did not sound her normal self and I did not hear her expected laugh.

I asked her to convey my greetings to Saalim. She replied, “In shaa’ Allah (God Willing)” and kept silent.

Finally I went back home. I knocked on the door, hoping to see Saalim opening the door, but I was surprised when my son Khaalid, who was less than four years old, opened the door. I carried him in my arms while he cried out in joy, “Father! Father!”

I do not know why I felt a sense of distress when I entered the house. I sought refuge in Allah The Almighty from the accursed devil. My wife came forward with an unusually strained face: it was as if she was faking her joy and happiness.

I looked at her carefully and then asked her, “What is the matter?” She said, “Nothing.” Suddenly I remembered Saalim and said, “Where is Saalim?”

She lowered her head and did not answer and some tears fell on her cheeks. I cried out, “Saalim! Where is Saalim?” Thereupon, I heard only the voice of my son, Khaalid, saying in a childish tone, “Saalim went to Paradise...he is with Allah…”

My wife could not bear her sorrow in silence anymore and burst into tears. She was about to fall unconscious on the ground, and left the room.

Later, I came to know that Saalim had contracted fever two weeks before my return. My wife took him to the hospital but his fever got worse and he died.

Reconciling people is among the great noble morals. The sharia urged it in more than one occasion as Allah Almighty says (what means): {So fear Allah and amend that which is between you.} [Quran 8: 1] The Messenger of Allah, sallallaahu ‘alayhi wa sallam, said: Sadaqa (i.e. charity) is due on every joint of a person every day the sun rises. Administering of justice between two men is also...More