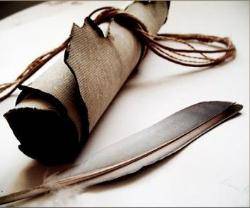 The first thing to be considered when a report reaches us is how did it reach us, is it by way of Tawatur, or by way of Ahad?

Tawatur in the Arabic language comes from the tri-literal root wa • to • ra, represented in English by the letters ‘w’ • ‘t’ • ‘r’. Some words derived from this root have "consecutiveness," "rapid succession," or copiousness woven into their meaning in one way or another.

For example, Allah Says (what means): {Then We sent Our messengers in succession.} [Quran 23:44] The word used in Arabic is tatra, which means one after the other, in succession. Besides, in a great poem, Labeed Ibn Rabee'ah describes the raindrops descending in "rapid succession," drenching the fur coat of a doe, using the word Mutawatir.

Phonetically (and even visually when the sounds are written in English letters), this word sounds is like its meaning: watara watara watara....You can imagine that sound of raindrops pattering against a window-pane, one drop after another.

Tawatur in the terminology of the scholars of hadeeth means transmitting a narration or religious text by a group of narrators from a group of narrators, generation after generation and so forth, and they are all trustworthy people and it is absolutely impossible for them to agree on a lie. The relationship between the terminological meaning and the linguistic one is that what is Mutawatir is reported by one person after the other after the other and so on, as if the people were coming like raindrops in a downpour.

For example, take the great Indian Ocean tsunami that hit Asia and Africa on 26 December 2004. The vast majority of readers of this article were not eyewitnesses to its actual occurrence. Nor can one depend on what was seen on television to prove that it did happen because we all know that film technology is eminently capable of producing imagery, whether accurate or fake.

Even if we exclude the possibility of tampering with images, the report we received was that the tsunami hit the entire coastline of the Indian Ocean, Asia, and Africa, while the images we saw only covered a minute portion of this. What would you say if I told you that the tsunami never happened and that the news was a conspiracy? You would reject what I said without investigation, and you would be right in doing so because it would be irrational to think that millions of people who were, indeed, witnesses to the tsunami would conspire to invent such a lie. Even though you were likely not an eyewitness to the tsunami, you can be 100 percent certain that it did happen. This is an example of a Mutawatir report.
There are three conditions that must be fulfilled for a report to be Mutawatir:

1. A large unexceptionable number of people convey the report. There is no specific number that constitutes a "large number." Rather, this is defined by the impossibility of conspiracy or collective mistake.

2. That there are a large number of people in every link of the chain of narrators.

3. That the conveyed report itself be about something that is tangible or perceptible, such as: "We saw," or, "We heard," or, "We felt," and so on. So saying, for example, that the universe began with a big bang cannot be Mutawatir, since it is something conceptual, something that none of us were capable of perceiving. However, that does not mean that the big bang is false. It just means that it is not a Mutawatir report.

There are two categories of Mutawatir reports:

The first category is those reports that are conveyed word for word, such as the statement of the Prophet

: "He who lies about me intentionally, then let him await his place in Hell-Fire." More than 70 Companions who actually had heard the Prophet

saying these words had reported it. Then the number increased in every successive link of the chain through the generations.

The second category of Mutawatir reports are those Ahadeeth whose meanings are conveyed by Tawatur but not a verbatim, word-for-word statement, such as the fact that the Prophet

used to raise his hands while supplicating. This has been reported in about 100 Ahadeeth, all of which have some variations, but make the common, perceptible observation that the Prophet

used to raise his hands when supplicating.

There are a significant number of Mutawatir reports, but the vast majority of Hadeeth literature is comprised of Ahad reports, meaning anything that does not fall under the category of Tawatur.

The scholar, Jamal Al-Deen Al-Sayooti, and others have compiled these Mutawatir reports into books of their own for easy reference.

This is the general idea of the concept of Tawatur.