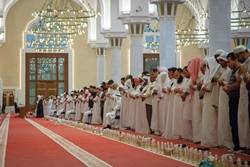 All praise be to Allah and may blessings and peace be upon our selected Prophet, his family, Companions and whoever followed his footsteps. Thereafter:

This is a brief note and reminder about the types of people in Ramadan with regards to this great act of worship and second pillar of Islam, namely prayer. Allah The Almighty Says (what means): {…Indeed, prayer has been decreed upon the believers a decree of specified times.} [Quran 4:103]

People have different states concerning prayer in this blessed month which they often do not transgress. We wanted to clarify them so that the Muslim may beware of being classified in the dangerous and grave among them and to yearn and be determined to elevate himself to reach the most perfect and best ranks. We ask Allah The Almighty and Exalted to Make this work sincere, a reason for drawing nearer to Him and further from Hellfire and to Pardon us all with His bounty and generosity. He alone Is worthy of this request and Is able to bring this to pass.

"He who fasts in Ramadan but does not pray in it or in any other (month)."

We say to this person: what kind of fasting is it that you aspire to attain its reward while you do not pray? Do you not know that prayer is the foundation of religion and the most important and confirmed pillar of Islam after the two testimonies of faith? You should know that whoever abandons prayer deliberately out of denying its obligation upon him is a disbeliever by virtue of the consensus of Muslim scholars and whoever abandons it out of negligence and laziness has disbelieved according to the most correct opinion. Your beloved Prophet

said: "(Nothing stands) between a slave and disbelief and Shirk except abandoning prayer." Of course, you know that fasting and other acts of worship are not accepted from a disbeliever.

"He who fasts in Ramadan and never prays except therein."

This person has angered his Lord and tried to deceive Him. He deserves to be a slave of Ramadan and not a slave of the Lord of Ramadan! It was said about this person and those who are like him: "Evil are those people who do not know Allah except in Ramadan." As previously mentioned, whoever abandons prayer is a disbeliever and his fasting and prayer in Ramadan only (without praying the rest of year) do not count.

"He who fasts in Ramadan but never prays whether alone or in congregation throughout the days of the year except the Friday prayers and Al-Maghrib prayers in Ramadan!"

If this person does not repent for his crime, his case would be grave and seriously dangerous and his recompense would be miserable. Allah The Almighty Says (what means): {So woe to those who pray [but] who are heedless of their prayer -} [Quran 107: 4-5] When this miserable person awoke from his sleep to the voice of the caller to prayer or more accurately awoke at the time of Iftaar (i.e. meal with which to break a fast) and devoured different sorts of food and drink, his feet drove him to the Masjid (i.e. mosque) as usual. It is usual that you find the Masjid crowded for Al-Maghrib prayer in Ramadan and there might not be sufficient space for the people performing the prayer. He does not perform the other obligatory prayers. There is no power or strength save in Allah The Most High and The Great. If he does not only abandon congregation but also abandons prayer altogether, then he is exposed to grave danger. We ask Allah The Almighty for a state of wellbeing.

"He who observes fast in Ramadan but abandons congregation in Al-Fajr, Ath-Thuhr and Al-‘Asr prayers and performs them at home and perhaps in other than their specified times."

There are some people who spend the nights of this blessed month and its virtuous times committing sins. They stay up late doing forbidden acts and attend gatherings of countless sins and acts of disobedience. These people waste their nights in what leads to the anger of Allah The Almighty and utilize His outward and inward blessings in what displeases Him and drives them away from His pleasure.

It is well known that whoever abandons an obligatory prayer until its specified time is over without a valid excuse according to the Sharee’ah will never be free from this obligation. This is true even if he repeats it a thousand times for every act of worship has a specified time, outside of which, it is not considered valid. Whoever deliberately abandons prayer by staying up late doing an act of disobedience has committed one of the gravest major sins.

"He who fasts in Ramadan and abandons Al-Fajr prayer all throughout the year and may pray it in Ramadan if he is awake!"

Many people are afflicted with missing Al-Fajr prayer in congregation and perhaps missing praying it in its specified time. You may find some of the people of the Masaajid who forgot or pretended to forget that there is a fifth prayer called Al-Fajr. Their habit all throughout the year is to stay up till the late hours of the night. You find that any one of them abandons this prayer either deliberately or out of negligence. In the meantime, you find him so keen on setting his alarm to get up for study or work! Nevertheless, in Ramadan, he may perform it, not out of care, but because it comes at a time when he is already awake! To these people, we say: remember that "the most difficult prayers for the hypocrites are Al-Ishaa’ and Al-Fajr prayers." This is the ruling of your Messenger

. Do you know, o brother, what is the punishment of the hypocrite?

"He who fasts in Ramadan but never goes to the Masjid nor attends the prayer in congregation neither in Ramadan nor in any other (month)."

There is a category of people who are deprived of goodness. They are deprived from enjoying the shades of the houses of Allah The Almighty. We ask Allah to Guide us and them. They never go to the Masaajid or attend the prayer in congregation even in this blessed month when blessings descend and hearts incline towards their Creator and what is more certain is that they never go to the Masaajid for the rest of the year.

narrated: "I have seen the time when no one stayed away from prayer except a hypocrite whose hypocrisy was well known." [Muslim] Does it please a reasonable wise person to be known in his district that he does not attend the congregational prayer? … That he is a hypocrite? Will a lazy person to go to the house of Allah The Almighty and be keen on performing prayer on time at home?

People and Prayer in the Month of Ramadan – II