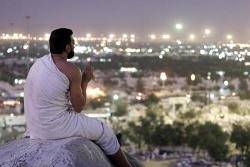 1 - Prior to Hajj and/or 'Umrah the Muslim should:

a) Purify his creed ('Aqeedah) from any aspects of Shirk, greater or lesser, as Shirk destroys one's deeds.

b) Devote his Hajj purely and sincerely for Allah.

c) Sincerely repent for all of his sins.

d) Acquire knowledge about Hajj and its rites.

e) Use Halal (lawful) means to support this great journey, taking what he will require (i.e. not begging while on Hajj to meet his needs).

f) Record all of his debts and include them in his Islamic Will.

g) Relieve himself from any kind of injustice which he may have inflicted upon others.

h) Secure the needs of his family members whom he leaves home.

i) Accompany the knowledgeable and righteous Muslims and stay away from the innovators.

j) Perform the Prayer on time and as prescribed during the journey and in the Hajj period.

l) Keep his beard and not shave it for Hajj or for any other reason, as this is prohibited.

m) Remember that it is unlawful for men to wear gold (rings included).

2 - Hajj is a journey that was taken by Prophets and Messengers before you.

Those who take the path of the Prophets glorify the Tawheed (monotheism) of Allah and glorify His House. However, there are those who come to perform Hajj and their hearts are attached to other than Allah. They invoke the dead and the righteous, whether present or absent. This is the opposite of Tawheed because it is setting up rivals with Allah. So, free your intention from any kind of devotion to other than Allah The Almighty. Repent and come to perform Hajj with a sincere heart, submitting to Allah and remembering what Ibraaheem and his son Ismaa’eel, may Allah exalt their mention, said when they were raising the foundations of Allah's House - the Ka'bah: {Our Lord! And make us submissive unto You and of our offspring a nation submissive unto You, and show us our Manaasik (all the ceremonies of Hajj and 'Umrah, etc.), and accept our repentance. Truly, You are the One Who accepts repentance, the Most Merciful.} [Quran 2:128]

3 - You are embarking on an expedition to Allah's House and you may or may not return to your home. So, make this journey as Allah wants it. Think of the next journey that is sure to come, the one that leads to the meeting with Allah the Most High. Indeed, this raises questions like: What did I prepare for that Day? Am I following Allah's Commands? Do I practice the Sunnah of Muhammad

? Do I really know Allah? {And invoke not any other ilah (god) along with Allah, none has the right to be worshipped but He. Everything will perish save His Face, His is the decision, and to Him (all) shall be returned.} [Quran 28:88]

4 - When you start saying the Talbiyah, remember the Command of Allah to Prophet Ibraaheem, may Allah exalt his mention: {And proclaim to mankind the Hajj. They will come to you on foot and on every lean camel, they will come from every deep and distant (wide) mountain highway (to perform Hajj).} [Quran 22:27] The Talbiyah you make is in response to Prophet Ibraaheem's proclamation to visit Allah's House of worship.

5 - Upon entering Makkah remember that you are in the Secure Sanctuary: {….Have We not established for them a secure sanctuary (Makkah), to which are brought fruits of all kinds, a provision from Ourselves, but most of them know not.} [Quran 28:57] Let one commit himself to repentance, having a good opinion of Allah, hoping that Allah will grant him security from His Punishment.

6 - You will enter one of the gates of al-Masjid al-Haram. Then there you are before the magnificent House of Allah the Most High - the Ka'bah. Now you see what you hoped to see for a long time. Thank Allah for making this possible and hope that He will grant you the greatest reward of seeing His Majestic Face on the Day of Resurrection. This thankfulness is not just in saying "Al-Hamdu-lillah," but also by obeying Allah while on Hajj and for the rest of your life.

7 - You start your Tawaaf knowing that it is a great time to glorify Allah the Exalted. Remember Him by His Names, Attributes and Actions. Also while in this state (Tawaaf), try to reflect upon the time when the Prophet Muhammad

was prevented from doing the very thing you are doing at that time. Ponder over what he

did when clearing out the site of idols signifying worship to other than Allah. All idols were demolished. Therefore, busy yourself with supplications. Ask Allah, the Most Great, to cause you to adhere to the correct belief, stick to the Path of the Salaf (righteous predecessors) and make you die in that state. Ask Allah to safeguard you from all forms of Shirk (polytheism) and Bid'ah (innovation).