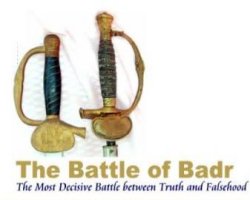 The Battle of Badr and the Issue of the Captives - I

The Battle of Badr ended but the believers were still reliving the delightful moments of victory, while recalling the scenes of humiliation and torture they had suffered at the hands of the tyrants of Quraysh during their persecution in Makkah. On seeing the corpses of the polytheists scattered here and there, the believers felt indescribable feelings of joy and happiness and thanked Allah The Almighty, who had completed His victory, exalted truth and crushed falsehood.

, ordered that the corpses of the tyrants of Quraysh should be collected so that everyone could see the bad end of disbelief and the people who follow it; their death would be a lesson for the coming generations. The Companions immediately implemented the order of the Messenger of Allah,

, to bring him the glad tidings of the death of his bitter enemy.
The Muslims collected twenty-four corpses of the polytheists and the Prophet,

, ordered that they should be thrown into one of the deserted wells in the area. Among the dead polytheists was the father of Abu Huthayfah, may Allah be pleased with him, who looked saddened at seeing this done to his dead father. The Prophet,

, noticed that andsaid to him:“O Abu Huthayfah, it seems that you are sad for seeing this done to your father.”Abu Huthayfah, may Allah be pleased with him replied, “O Messenger of Allah, by Allah, I never held the least doubt in Allah and His Messenger, but he was a wise man and I wished that he would not have died before being guided to Islam. So, when I saw it was too late for that, I felt sad.” Thus, the Prophet,

, camped at the battlefield for three days; this then became a regular practice in all of his battles. On the third day, the Prophet,

, ordered that his camel should be prepared for the return journey to Madeenah. Then, he went to the place where the dead polytheists had been buried and started to call them by their names and by the names of their fathers, saying: “Would it not have been much better for you had you obeyed Allah and His Messenger? Behold, we have found that the promise of our Lord came true; did you [also] find that the promises of your Lord have come true?”Thereupon, the Companions wondered how the Messenger of Allah,

, could speak to dead people. The Prophet,

, answered: “By Allah, you do not hear what I am saying better than they do.” [Al-Bukhari]
When the battle was over, the Muslims faced a new problem for they did not know how they should distribute the war booty, and whether it should be given to those who had collected and guarded it, or to those who chased the fleeing polytheists, or to those who assumed the responsibility of guarding the Prophet,

, during and after the battle. The Quran answered these questions where Allah The Almighty says (what means):
Consequently, the Prophet,

, divided the booty equally among the fighters after he had taken one-fifth. [Ahmad]

The Battle of Badr and the Issue of the Captives - II