Prophet Site > His life at a glimpse > Prophethood > His demise: > 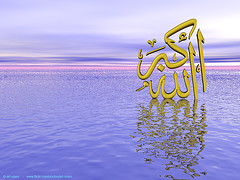 , was sent as a Messenger, and he remained in Makkah calling people to Tawheed (Islamic monotheism) for thirteen years, during which time he was receiving divine revelation. Then, he emigrated to Madeenah and remained there for ten years until he died when he was sixty-three years old. [Al-Bukhari]

was of the opinion that the Thuhr prayer of the preceding Thursday was the last prayer that the Prophet,

, performed with his Companions, may Allah be pleased with them, after which he no longer went out to them, i.e. on the Friday, Saturday and Sunday – which made three full days.

After the death of the Prophet,

, to be buried.
His body was washed through his clothing and was shrouded in three white Suhooliyyah garments, having neither a shirt nor a turban. Then, the people prayed over him individually and behind no Imaam, according to the consensus of the scholars. The men first prayed over him, followed by the children, then the women, then the slaves and then the maids. His death was on a Monday, according to the most preeminent opinion of the scholars, and his burial was on a Wednesday night. He was placed in a Lahd (a crevice made on the side of a grave facing the Qiblah), and the opening of the Lahd was filled with bricks [Muslim] and his grave was elevated nearly a hand’s span over the ground. [Ibn Hibbaan, Al-Arnaa’oot - Hasan] The grave of the Prophet,

, was elevated and convex. According to collectively contiguous narrations, he was buried in the chamber of ‘Aa’ishah, may Allah be pleased with her, that was found on the eastern side of his mosque, exactly in the upper west corner of the chamber. The mosque was widened in 86 AH by the command of Al-Waleed ibn ‘Abdul-Malik, through his deputy ‘Umar ibn ‘Abdul-‘Azeez

who was the ruler of Madeenah at that time. When it was widened from the east direction, the chamber of the Prophet,

, was incorporated into it.
In conclusion, there are many lessons and benefits to be obtained from this article, some of which are:
1-    The Prophets and Messengers are the dearest of creatures to Allah The Almighty. They died, for none from among the creatures of Allah shall live eternally. This implies that the world is only a delusionary enjoyment which will never last forever. Nothing of man’s toil and property remains but that with which he sought the pleasure of Allah The Almighty, and what is other than that is dispersed dust.
2-    The Prophet,

was very much eager to be with the Highest Companion; hence, he asked Allah The Almighty to grant him that many times. This indicates how great these ranks are for His prophets and those who obey Him.
3-    It is recommended to cover the body of the dead after closing his eyes, and to tie up his chin with a band (to keep his mouth closed). This is why the Prophet,

, was enshrouded and covered with a Hibrah garment.
4-    It is important to supplicate for the dead for good effect after his death, for the angels say ‘Amen’ (in confirmation) to that. This is why Abu Bakr, may Allah be pleased with him, said to the Messenger of Allah,

, “May you be well, alive and dead!”
5-    If the Muslim is afflicted with a calamity, he should say, “We all belong to Allah, and to Him shall we return: O Allah! Give me a reward for my [patience in my] calamity, and recompense me in substitution with something better than it.”
6-    It is permissible to weep by shedding tears and grieve with the heart.
7-    It is forbidden to wail (over the dead), tear one’s clothing, shave or pluck the hair, or follow any other of the corrupt practices of the pre-Islamic era; the prohibition of all this is attested by authentic proof.
8-    No matter how great a person might be, he may miss something and fall into mistakes out of forgetfulness, and the correct position may be with somebody else.
9-    The superiority, knowledge and religious understanding of Abu Bakr, may Allah be pleased with him, are undeniable. This explains his statement “No doubt! Whoever worshipped Muhammad

then [he should know that] Muhammad

, and the dearest of people to him and one of the two when they were in the cave.
16-           It is recommended to shroud the dead in a white shroud consisting of three garments with neither a shirt nor a turban, and to place the dead in a Lahd and set bricks to fill the opening of the Lahd, and to make the grave elevated and convex but by no more than a hand’s span over the ground.