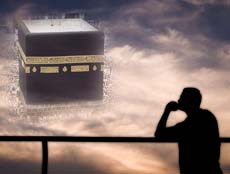 Just a single thought about the Hajj causes me to lower my head and tears fill my eyes. I try to talk about it, but my throat chokes-up and I feel my heart soften inside my chest. I have been blessed to attend the Hajj three times now in my lifetime, but I still desire a fourth.

My memories take me back there again. Allahu Akbar! I can still hear the words echoing in my ears, "Labbayka Allahumma labbayk. Labbayka laa shareeka laka labbayk. Innalhamda wan-n'imata laka walmulk, laa shareeka lak"
As I sat on the bus heading towards Makkah, I saw many things. I noticed guarded posts along the highways stopping cars to check passports. Looking out the small window of the bus, I realized that I felt safe in this place, like I did at home. Looking ahead, I noticed large groups of people anxious to pass through the entrance of the Haram. The closer I got to the Ka’bah, the more anxious I became. "I am almost there", I thought to myself. I felt my eyes getting wider as I saw Muslims performing Tawaaf. Peering further towards the center, I saw the Ka’bah! It is tall and majestic, draped in black with a single, wide gold stripe that traveled horizontally around its perimeter. I just stood very still and stared, not even remembering how I exited the bus. "Well," taking a deep breath, thinking to myself, "here I am O Allah. What will happen now? I am here in Your House!" My thoughts were racing as I joined a group of pilgrims. I walked hurriedly with the help of the swift-moving crowd towards As-Safa and Al-Marwah, blending in the procession. I was fulfilling one of the pillars of our religion.
The Hajj represents the unity of Muslims, and there were Muslims from every country gathering here, wearing the same clothing and worshiping the same one God in an identical manner. I am awestruck with the reality of true Islam in this place and I remember Allah's Saying (which means): “Hajj to the house of Allah is a duty of mankind towards Allah for those who are able to make their way there.” [Quran 3: 97]
Towards the end of my journey, I arrived at Muzdalifah, again by bus. It was there that I was stung by a scorpion that left its mark on my upper forearm. Although painful, but by the Mercy of Allah, an ambulance arrived in a flash through the huge crowd of more than a million people, and began treating me within five minutes. I was taken to the hospital where I received care and was able to continue my Hajj. I knew I was safe in this special place.
For me, the Hajj is such an intensely powerful experience that mere words cannot describe. It is a step into the world of a pure and untainted Islam where love abounds amongst all Muslims. The unity of the Ummah is apparent and can be witnessed. And in the eyes of the believers, one is a witness to humility and admiration for our Creator that is unparalleled to anything else one will ever experience in a lifetime.
As I mentioned earlier, I have performed the Hajj three times now but long to do it once more. And although I have fulfilled the obligation to perform the Hajj, I have found that it is not an event the soul tires of, for the Hajj is a journey — that once experienced — the soul continues to yearn for.