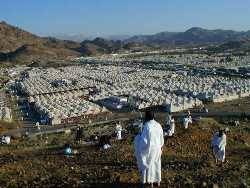 The following are some of the deeds that one should be keen on doing at all times and especially in these blessed days:

1) Praying in congregation: prayer is of a great value. The Prophet

said: "The head of the matter (religion) is Islam, its pillar is the prayer and its highest peak is Jihaad in the Cause of Allah." [At-Tirmithi]

It is the first act of worship to be prescribed by Allah, The Almighty, and it is the final command by the Prophet

to his nation before his death as he said: "Adhere to prayer, (adhere to) prayer and (take care of) those whom your right hands possess (i.e. slaves)." [Ahmad]

It is the last thing to be lost from religion. If it is lost, the entire religion is lost. The Prophet

said: "The knots of Islam will be undone one by one until every one of them is undone. Whenever a knot is undone, people cling to the next. The first one to be undone is the ruling by what Allah has revealed and the last one is the prayer." [Ahmad]

Allah, The Exalted, made it one of the basic conditions for guidance and piety and He excluded those who pray from having dispraised morals and bad qualities.

considered the prayer as the separating border between Islam and disbelief for he said: “The covenant that is between us and them (i.e. the non-Muslims) is [that they perform] prayer. Anyone who abandons it has disbelieved.'" [Ahmad, Abu Daawood, At-Tirmithi, Al-Nasaa’i and Ibn Maajah]

Unfortunately, some people neglect praying in mosques with the Muslim congregation, whereas Allah, The Almighty, Says in His Noble Quran (what means): {And establish prayer and give Zakah and bow with those who bow [in worship and obedience].} [Quran 2:43] This verse indicates that it is obligatory to pray in congregation and participate in prayers with other worshippers.

There came to the Messenger of Allah

permission to pray in his house. The Prophet

said: "Do you hear the call to prayer?" He said, "Yes." The Prophet

then said: "Respond to it."

said: "If anyone hears the caller to prayer and is not prevented from joining the congregation by any excuse, the prayer he offers (at his home) will not be accepted from him. He

was asked, "What is the (acceptable) excuse, O Messenger of Allah?" He

about a man who fasts during the day and prays Qiyaam at night but he does not witness the Friday prayer and the congregational prayer. Ibn ‘Abbaas

said, "He will enter Hell."

Thus, be keen on performing the prayer in congregation and repent to Allah, The Almighty, of shortcomings, negligence, carelessness and laziness in performing it.

2) Avoiding reliance upon and supporting disbelievers: the basic rule in this issue is allegiance to the believers and disassociation with the disbelievers and polytheists. This is the firmest knot of faith. It is among the deeds of the heart; however, its requisites appear on the tongue and the other bodily organs. The Prophet

Some forms of allegiance to disbelievers:

Allegiance to disbelievers has many forms such as imitating them in dress and speech, residing in their countries and travelling there for excursions and enjoyment and taking them as intimate friends and counsels. In addition, among the widespread forms are participating in their feasts, helping in celebrating them, congratulating them and attending those feasts. Moreover, the forms of allegiance to the enemies of this religion include glorifying them, naming children with their names and admiring their morals and skills without considering their corrupt creeds.

3) Saving time: The capital of the believer in this world is his time in which he plants for the Hereafter. The Prophet

If you, o Muslim brother and sister, save your money and economize in spending it, then time, just like money is more worthy of being preserved and managed. Money can be collected, saved and invested. However, time is the opposite. Thus, save your time and work for the Hereafter as your Lord ordered you. Allah, The Almighty, Says (what means): {And I did not create the jinn and mankind except to worship Me.} [Quran 51:56] Imam An-Nawawi

said, “This is a declaration that they were created for worship. Hence, they should give due care to what they have been created for and decline the shares of this world by relinquishing them. This world ends quickly; it is not eternal, it is a ship for crossing to the Hereafter, not a resort for enjoyment and it should be parted with as it is not a place for permanent residence."