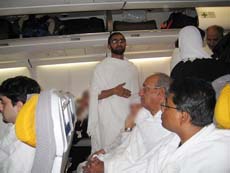 As the fifth pillar of Islam, Hajj is a must for those faithful who are physically and financially able to make the journey. Over the years, the numerical rise of the pilgrims has been phenomenal. From the hundred thousand plus who performed Hajj with the Prophet

in 10 A. H., we have some 2.5 million doing so today every year. The number would be 10 times more if the Saudi government had not enforced a pilgrim quota for Muslim countries due to logistical reasons.

Speaking of soulfulness of Hajj, the year Prophet Muhammad

said: "Bathe his body with water and Sidr (lotus tree leaves) and bury him with both garments. Do not cover his head, nor touch him with camphor ... for verily he will be returned (to Allah) on the Day of Resurrection in the state of Talbiyah! (saying Labbayk Allahumma Labbayk)." [Al-Bukhari and Muslim]

In another incident, ‘Amr Ibn Al-‘Aas, may Allah be pleased with him, narrated: “When Islam entered my heart, I went to the Messenger of Allah

and said, `Give me your hand so that I may pledge allegiance to you.' The Prophet

spread his hand, but I withdrew mine. He

said. I said, `That Allah will forgive me.' Then the Messenger of Allah

also said: “Whoever performs Hajj and does not commit any obscenity or transgression, he returns (free from sin) as the day his mother born him.” [Al-Bukhari]

The reward for an accepted Hajj, said the Prophet

is nothing but Jannah ().

This is the key: The reward of Jannah comes from an accepted Hajj and acceptance results from the purity of intention and adherence to Allah's Commands. Some of us come from the Hajj feeling an inner tranquility; some feeling uneasy that they were not always patient during the Hajj; others expressing unhappiness at not having received the promised comfort from their tour operator.

Western pilgrims generally get plenty of advice about what to do, and what to expect during Hajj. Yet there is no substitute to the awe-inspiring, hair raising personal experience. Despite its challenges, our Hajj is a picnic compared to that performed by the Prophet

and Muslims of earlier times. Then were no airplanes or cars, no five-star hotels; even ships were flimsy by today's standards. Traveling over sea and through desert exposed the pilgrims to pirates and robbers. The journey to Makkah took weeks. People bade farewell to pilgrims as if they were embarking on a journey of no return.

The Quran refers to the travels of earlier pilgrims thus (what means): “And proclaim to the people the Hajj [pilgrimage]; they will come to you on foot and on every lean camel; they will come from every distant pass.” [Quran 22: 27]

Today, most passengers fly in comfortable jetliners, where they are served with lavish amount of food, beverages and snacks. They are then transported in air-conditioned buses and housed in cozy hotels that are within walking distance from the Haram (the Sacred Area). Yet some of us complain that that wasn't good enough, or that they did not get their meals on time.

What's the purpose of Hajj? Is it to test our physical endurance, financial sacrifice, or to show us the equality of the Muslim Ummah (Nation) before Allah? Some have compared the standing in ‘Arafah, the most important ritual of the Hajj, to the humanity's facing its Creator on the Day of Judgment. Although there is nothing like the Day of Judgment in our experience, the comparison points to something important.

Consider the first two verses of the chapter of Al-Hajj (which mean):

“O mankind, fear your Lord. Indeed, the convulsion of the [final] Hour is a terrible thing. On the Day you see it, every nursing mother will be distracted from that [child] she was nursing, and every pregnant woman will abort her pregnancy, and you will see the people [appearing] intoxicated while they are not intoxicated; but the punishment of Allah is severe.” [Quran 3: 22]

During the Hajj, we do become engrossed in our own affairs to the extent of being selfish, although only a tiny fraction of humanity is gathered there compared to the Day of Judgment, when everyone will be present. That day will be like no other. Reflecting on the first verse of the Chapter of Al-Hajj makes it quite apparent why Allah exhorts us to fear Him. Fearing and obeying Allah in this life seems to be the only option if we want to be spared the frightfulness and grief of the Day of Gathering.

Hajj also reminds us that if the travel is difficult and requires a lot of preparation and provision, what is it that we have prepared for that final journey? While everyone may not be able to go for Hajj, the entire humanity, without exception, will have to die and make the final journey.

When someone anxiously asked the Prophet

about the end of time, he

returned the question: “What have you prepared for it”? [Al-Bukhari and Muslim]

No matter the amount of money and preparation we make for Hajj, it is the sincere intention that counts the most. As for the final journey, the best provision is what Allah has prescribed in the verse (which means): “…And take provisions, but indeed, the best provision is fear of Allah. And fear Me, O you of understanding.” [Quran 2: 197]

It is important that we remember the spiritual aspect of Hajj and refrain from pursuing excessive physical comfort. Hajj is not a vacation, but a duty we owe to Allah. The deluxe packages, five-star hotels, and comfortable buses do not contribute to Hajj's acceptance; in fact they may distract from Hajj.

During Hajj, we should concentrate on the rituals, overlook others' mistakes, and seek Allah's forgiveness. A simple reflection while standing in ‘Arafah can become an atoning experience. Upon return from Hajj, we should avoid dwelling on the negatives. A tranquil and forgiving heart and upright actions would be good signs, Allah willing, that the Hajj was accepted.