Hajj: A message to mankind 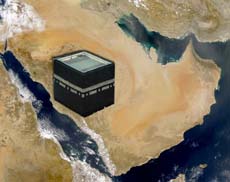 This is the season of the greatest of spiritual journeys, held dear in the heart of every Muslim.

For five thousand years and more, Hajj has lived on as the grand meeting of man's most intense and sustained remembrance of his Lord.
For more than 1400 years, since the last days of the Prophet Muhammad

each year it has thrived in the very spirit, and in compliance with the Divine Will, of the Sacred Way of the One Whose call it seeks humbly and adoringly to answer and to glorify.
The distant behold it as a perennial marvel, a primordial milestone in the spiritual ascent of man. The near ones see it as a miraculous moment, almost perpetual, out of time, single-handedly rejuvenating weary faith and motivating the meeting of reborn hearts, and tuned-in minds. And thus it is for the willing submitters, the Muslims—and what a searing reminder it is to them of their role as emissaries of Heaven unto humankind!
Indeed, Hajj enlivens and fortifies the conscience with a profound sense of connection, so deep in the human past, to Prophet Ibraaheem (Abraham, may Allah exalt his mention), his wife Haajar, and his first son Ismaa’eel (Ishmael, may Allah exalt his mention) both of whom he (Ibraaheem, may Allah exalt his mention) left alone in the wilderness of the Barren Valley where they received from Allah the miracle of the blessed water of Zamzam and waited impatiently for the Prophet-Patriarch's return.
The Quran tells us the story of Ibraaheem, may Allah exalt his mention, in remarkable detail with intended emphasis on the events, related to Hajj and the construction of the Oldest House of Allah—the Ka'bah. Allah Says (what means): “Indeed, the first House [of worship] established for mankind was that at Bakkah (another name of Makkah) – blessed and a guidance for the worlds. In it are clear signs [such as] the standing place of Ibraaheem (Abraham). And whoever enters it shall be safe. And [due] to Allah from the people is a pilgrimage to the House – for whoever is able to find thereto a way. But whoever disbelieves – then indeed, Allah is free from need of the worlds.” [Quran 3: 96-97]
These verses, along with those related to Prophet Ibraaheem, may Allah exalt his mention, in the second and twenty-second chapters of the Quran, show that most of the acts that the pilgrims are required to perform in their rituals are meant to honor him (Ibraaheem, may Allah exalt his mention), and to underscore the divine reality that faith in Allah can be neither complete nor acceptable to Him without one believing in precisely what Ibraaheem, may Allah exalt his mention, believed, learning the essences that he taught, and standing up for all that he stood for. Allah Says (what means): “Then We revealed to you [O Muhammad] to follow the religion of Ibraaheem, inclining toward truth; and he was not of those who associate (anything in worship) with Allah.” [Quran 16: 123]
Thus does the Quran use the term “religion of Ibraaheem,” in the same way it uses the word `Islam,' or `submission,' to mean and refer to the religion of Allah. It also tells us that all the Prophets sent by Allah—from Nooh (Noah), to Ibraaheem (Abraham), to Moosa (Moses), to ‘Eesaa (Jesus), may Allah exalt their mention, down to the Last and Final Messenger, Muhammad

—conveyed to humankind the same basic message of that religion of Allah, and called them to submit themselves willingly to and worship the same One and only God, Allah, our Almighty Creator and Merciful Lord.
In fact, after the narration of the stories of many of Allah's Prophets, may Allah exalt their mention, and their encounters with the people to which Allah sent them, the Quran indicates in a chapter titled the “Prophets” that (what means) “Indeed [We said to all the Prophets]: this, your religion, is one religion, and I am your Lord, so worship Me.” [Quran 21:92] So true. So real.
Allah is One and people are one community, wherein every human being deserves a fair and equal chance before Him.
But has it ever occurred to you that this simple reality is not acknowledged by any religion other than Islam? No other religion actually questions the fate of people before its advent or indicates why Allah did not – consequentially – provide them with guidance, a message, or a way of achieving eternal happiness. Some even restrict their message to a particular ethnicity or era.
Islam, on the other hand, not only recognizes the equal value of all people, it actually asserts that Allah will not hold any person accountable without first sending a messenger [Quran 17:15]. Moreover, it makes it an essential part of faith to firmly believe that the people of Paradise will be comprised of other than those who are Muslims (i.e. the believers before the advent of Islam) so long as they are true followers of all the Messengers and the Prophets of Allah.
This is a main reason that a sizable number of Islamic juridical rulings resemble the requirements of preceding religions upon their followers. Moreover, it is why so many of the Quranic commandments are directed toward humankind and not only to Muslims.
Hajj, the fifth pillar of the edifice that is Islam, is a good case in point.
The Quran tells us that Allah asked Prophet Ibraaheem, may Allah exalt his mention, to call humankind to perform Hajj. Allah Says (what means): “And proclaim to the people the Hajj [pilgrimage]; they will come to you on foot and on every lean camel; they will come from every distant pass.” [Quran 22: 27] Implicit in this verse is the fact that all of those who answer this call comprise the community of believers—wherefore there is nothing to make a Muslim feel a more positive sense of, integration with, and commitment to his or her relationship with the rest of humanity than the performance of the primal rites of Hajj.
In them, and in the Hajj experience all together, there is an irrefutable validation of the truth of Islam; for it establishes, beyond doubt, the Oneness of the One God and the equality of the human creation in collectivity—as humankind, offspring of Aadam before Him.