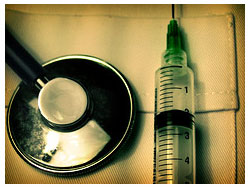 It is necessary for pilgrims to take care of their health, especially during the Hajj season that has a lot of over crowdedness and is rife transmission of diseases.

Consequently, they are advised to protect themselves against diseases by means of taking preventive vaccinations that will protect them, Allah Willing, from diseases that are spread during the Hajj season.
There are recommended vaccinations that should be taken before Hajj, noting that some of them are mandatory and others are optional:
1. Vaccination against cerebrospinal fever (Meningitis):
This is an important vaccination that must be taken by all pilgrims coming to the Sacred House of Allah.
As an important procedure, the dose should be taken at least ten days before traveling. The vaccination is effective for no more than three years.
Cerebrospinal fever is an infectious disease that is transmitted through the spray that is released from mouth and nose. It attacks the brain membrane and the spinal cord, and this leads to developing dangerous symptoms unless pilgrims are immediately placed under medication once they contract the disease.
There are some precautionary procedures for preventing the contraction of cerebrospinal fever: maintaining personal hygiene, ventilating bedrooms to let in fresh air and sunrays, washing hands after shaking hands with sick people, avoiding exposure to air streams, having adequate nutrition to reinforce immunity, avoiding crowded places if possible, avoiding sharing private things such as towels, tissues and cups with others. Using tissue is necessary when sneezing.
2. Vaccination against yellow fever:
Yellow fever is commonly spread in semi-desert African areas and in South America and Central America. Pilgrims who come from such places must be vaccinated against this disease.
Yellow fever is infectious, dangerous and has grave consequences. Symptoms include a sudden rise in body temperature, headache, dizziness, muscular pain and a collapse in liver and kidney functions.
3. Vaccination against influenza:
This is an optional vaccination for all pilgrims coming to the Sacred House of Allah. However, those who are more likely to contract influenza, as in the case of old people and other people with chronic respiratory diseases, diabetes and kidney failure, are recommended to take this vaccination. Generally, physicians recommend vaccination against influenza for most pilgrims contract it because of crowding, the thing that affects the level of their performance of the rituals of Hajj.
4. Vaccination against pneumonia:
It is called pneumococcus vaccine, which is not given to all pilgrims, but to people with sickle cell anemia, or kidney failure or immunity deficiency, or people with removed spleens. It could also be given to old people, or to those who suffer from chronic diseases in liver, heart or lungs.
5. Vaccinating children:
In addition to taking basic vaccinations against main childhood diseases, namely whooping cough, diphtheria, measles, tuberculosis and tetanus, children must be vaccinated against diseases that are spread during Hajj.
6. Vaccination against cholera:
Cholera is a dangerous disease that is common in India and Pakistan. Pilgrims who come from these countries should take precautionary procedures against it. As such, they must be vaccinated against the disease to reduce its threats and effects on others.
7. Vaccination against typhoid and paratyphoid fever:
This is one of the most serious fevers, as it is contracted via salmonella A, B, and C types. Infection is transmitted through food or drinks that are contaminated with salmonella bacteria.