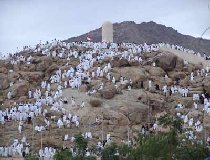 , said: “Hajj is ‘Arafah.” [At-Tirmithi and An-Nasaa’i] This proves the importance of this pillar of Hajj to the extent that it is like the entire Hajj itself.

‘Arafah is located outside the borders of the Haram (Sacred Precinct) as it is nearly twenty-one kilometers away from Makkah. This represents one of the boundaries of Al-Masjid Al-Haraam (the Sacred Mosque) from the east. Its area is 10.4 square kilometers. There are signs that clearly show the borders of ‘Arafaat, therefore, the pilgrims should be alert to this and make sure that their standing in ‘Arafah is not out of its boundaries or else it will be equivalent to them missing Hajj.
Pilgrims gather there on the ninth of the month of Thul Hijjah, shorten their Thuhr and ‘Asr and pray them at the time of Thuhr (or as early as possible after that) in combination and remain there up to sunset.
On the Day of ‘Arafah, it is recommended to remember and mention Allah plentifully, ask for forgiveness, and recite the Quran. The Prophet,

, said:“The best supplication is that on the Day of ‘Arafah.”[At-Timithi]
Among other Hadeeths that were narrated regarding the virtue of this blessed day is what was narrated on the authority of ‘Aa’ishah, may Allah be pleased with her, that the Prophet,

, said: “There is no day when Allah sets free more slaves from Hell than the Day of ‘Arafah. He draws near, then boasts of them to the angels, saying: ‘What do they want?’” [Muslim]
From the western side of ‘Arafah, there is the ‘Urnah valley that has the mosque of Namirah whose rear part is inside ‘Arafah, after its expansion, while the front part of the mosque is outside ‘Arafah. Pilgrims should be wary of this as they should not stand in the front part of this mosque, which is outside the borders of ‘Arafah.