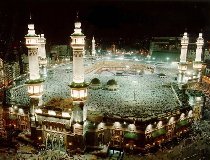 Among those etiquettes are the following:
1-           To enter with the right foot and recite the supplication of entering the mosque: It is recommended, when entering Al-Masjid Al-Haraam, like other mosques, to supplicate with the following supplication: “A‘oothu billaahi Al-‘Atheem wa biwajhihi al-kareem wa sultaanihi al-qadeemi min ash-shaytaan ar-rajeem; al-hamdu lilaah; Allahumma salli wa sallim ‘ala Muhammad wa ‘ala aali Muhammad. Allahumma ighfir lee thunoobi waftah lee abwaaba rahmatik. [I seek refuge with Allah, the Most Great, and with His bounteous Countenance and eternal Power from Satan the expelled (from the mercy of Allah). All perfect praise be to Allah. O Allah, send blessings and peace upon Muhammad

and upon his family. O Allah, forgive my sins and open the gates of Your mercy before me.]” Then, one should say, “In the Name of Allah,” and proceed with the right foot to enter the mosque.
2-           Among the important etiquettes that the one entering the mosque should adhere to is to be free from any foul smell like the smell of onion, garlic, or smoke, as the Messenger of Allah,

:“Whoever eats garlic or onion should keep away from us [or from our mosque].” [Al-Bukhari and Muslim]
3-           Tahyyatul-masjid for Al-Masjid Al-Haraam: This is for the Muslim to pray two Rak’ahs (units) upon entry. However, whoever comes while being in the state of Ihraam should not do this and instead proceed directly to Tawaaf (circumambulation of the Ka’bah).
4-           To avoid quarrelling and raising voices in the mosque: Quarrelling and raising voices in the mosque are disliked acts, as is seeking lost property by raising one’s voice and transaction, due to the Hadeeth narrated on the authority of Abu Hurayrah, may Allah be pleased with him, that the Prophet,

, said: “If you see somebody selling or buying in the mosque, say to him, ‘May Allah not make your transaction profitable’; and if you see anyone seeking [in a loud voice] his lost property in it, say to him, “May Allah not return it to you.’” [At-Tirmithi, Al-Albaani - Saheeh]
5-           Performing many acts of worship as good deeds are multiplied in reward in Al-Masjid Al-Haraam. Therefore, a Muslim should perform much Tawaaf, prayer, recite Quran, make Thikr (mentioning and remembrances of Allah) and supplication, and waste no time on what would not do him any benefit in the Hereafter.
6-           Avoiding sins and misdeeds: the mosque is a place of worship, and sufficient as a warning against the committing of sins in Al-Masjid Al-Haraam is that Allah accounts therein even the intention to commit a sin, let alone actually committing it. In confirmation of this, Allah The Almighty Says (what means): {And [also] whoever intends [a deed] therein of deviation [in religion] or wrongdoing - We will make him taste of a painful punishment.} [Quran 22:25]
7-           Avoiding crowding with people particularly at the Black Stone. It is true that touching the Black Stone is recommended, but should crowding with people lead to harming them, it becomes prohibited.
8-           Reciting the supplication of leaving the mosque: If the Muslim wants to leave the mosque, it is recommended for him or her to exit with his left foot and say while leaving: “Allahumma inni as’aluka min fadhlik. [O Allah, I ask You (to provide me) from Your bounty]” or say, “Rabbi ighfir li waftah li abwaaba fadhlik. (O my Lord, forgive me, and open the gates of Your bounty before me.)” This should be said after invoking blessings and peace upon the Prophet,