'A Pilgrimage to the House' 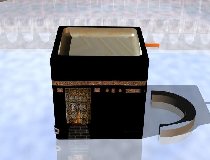 Allah The Almighty Says (what means): {And [due] to Allah from the people is a pilgrimage to the House -- for whoever is able to find thereto a way. But whoever disbelieves -- then indeed, Allah is free from need of the worlds.} [Quran 3:97]

Allah The Almighty started this verse and the verse before it by dealing with the virtues of the House (Ka'bah) and its great status to arouse the interest of people in going and travelling to it. Allah The Almighty said that this House is the first House of worship established for mankind and that it is blessed and a guidance for people. It has clear signs such as the standing place of Ibraaheem (Abraham), may Allah exalt his mention, and it is a safe place.
After mentioning the status of this blessed House, Allah The Almighty mentioned the ruling of this act of worship by saying (what means): {And [due] to Allah from the people is a pilgrimage to the House} This verse indicates obligation through more than one aspect, all are mentioned by the scholars of Tafseer (exegesis).
Scholars agree on quoting this verse as a proof of the obligation of Hajj and they agreed that Hajj is obligatory once during the lifetime for the one who can afford it. They have different opinions regarding whether this obligation should be performed at once or can be delayed for some time. This will be pointed out later on.
Abu Hurayrah, may Allah be pleased with him, said, "The Prophet

addressed us and said: 'O people! Allah has made Hajj obligatory on you; so perform Hajj.' Thereupon a person said, ‘O Messenger of Allah! (is it to be performed) every year?’ The Prophet

kept silent, and the man repeated (this question) thrice, whereupon the Prophet

said: 'If I were to say yes, it would have become obligatory (for you to perform it every year) and you would not have been able to do it.'" [Muslim]
Ibn ‘Abbaas, may Allah be pleased with him, narrated that the Prophet

said: "Hasten to perform Hajj (the obligatory Hajj), as no one of you knows what might happen to him." The wording of another narration reads: "The one who wants to perform Hajj should hasten to perform it." [Ahmad]
It was authentically narrated that ‘Umar, may Allah be pleased with him, said, "The one who is able to perform Hajj and does not perform it would make no difference for him whether he dies as a Jew or a Christian (since by rejecting the obligation of Hajj he is no longer considered a Muslim)." No Hadeeth (narration) that carries this meaning was authentically narrated from the Prophet

on the day of the Farewell Hajj and asked, "‘O Messenger of Allah! Hajj was made obligatory after my father had become a very old man and cannot sit properly on his mount. Will the obligation be fulfilled if I perform Hajj on his behalf?’ The Prophet

said: 'Yes, if your father was in debt, will you pay his debt?' She said, ‘Yes.’ The Prophet

said: 'Then the debt of Allah is worthier of being fulfilled.’" [Al-Bukhari and Muslim]
This Hadeeth proves the permissibility of assigning someone in Hajj if the person was unable to perform it.
Allah The Almighty Says (what means): {for whoever is able to find thereto a way.} Scholars have different opinions regarding the interpretation of this part of the verse. Ibn ‘Abbaas, may Allah be pleased with him, said that this means having the provision and the animal to ride. Thus, if the Muslim can have means of transportation that enable him to perform Hajj and can afford the expenses of his provisions such as food, drink and housing and this money was extra to the money needed by the ones on whom he spends, Hajj will be obligatory on him. If any of these conditions is not met, the person will not be considered capable of performing Hajj.
‘Ikrimah, may Allah be pleased with him, said that this means being healthy and if the person is not healthy, he will be considered incapable of performing Hajj.
Maalik

said that this means the capability and people differ according to their ability and endurance.
These opinions indicate that the ability to perform Hajj means having both the physical and moral means that enable the person to perform Hajj without giving up any of the duties that he is in charge of, such as spending on his children and so forth.
The apparent meaning of the verse indicates that Hajj would be obligatory at once, without delay, if the person was able to perform it and this is the opinion of the majority of scholars.
Ash-Shaafi‘i

said that Hajj is obligatory, but not at once, i.e. it could be delayed for a while, yet it is unfavorable to delay it without a need as it is better to hasten to perform acts of obedience.
Allah The Almighty Says (what means): {But whoever disbelieves -- then indeed, Allah is free from need of the worlds.} In this part, Allah The Almighty indicates that He is not in need of the worship of His slaves and that He does not need the Hajj of any one as He is free of need and praiseworthy. Allah The Almighty does not benefit from the obedience of the obedient slaves and Is not harmed by the disobedience of those who are disobedient. This verse indicates the hatred of Allah The Almighty and His punishment for those who have deviated from the way of guidance and turned away from His Legislation.