Manners of the people of the Quran 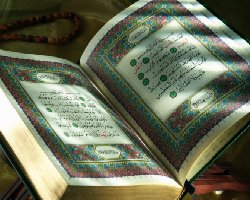 Memorizing the Quran is one of the greatest blessings of Allah The Almighty upon His slave. Thus, one must thank its Giver, so that He will bless it for him and make it of benefit to him. Furthermore, all those who have memorized the Quran should follow its guidance, adopt its morals and apply its manners. This was aptly represented in the personality of the Prophet,

, who was, as ‘Aa’ishah, may Allah be pleased with her, described, "an embodiment of the Quran."

Scholars from amongst the righteous predecessors spoke of some of these etiquettes. Bishr ibn Al-Haarith

say: 'When one memorizes the whole Quran,an angel kisses him between his eyes. Thus, such a man should make the Quran the life of his heart and a catalyst for the reform of its defects. He must adopt the manners and noble morals it teaches, that distinguish him from those who do not memorize the Quran. He should first fear Allah The Almighty, in public and in private, by being pious in all of his affairs. He must also be aware of current events and of the corruption of his people, and guard his religion against them. Moreover, he should be keen to rectify himself and restrain his tongue, such that he is careful with his words. When he sees that speaking is right, he does so with knowledge; and when he deems silence more appropriate, he should remain quiet. He must not talk about things that do not concern him. He should fear his tongue more than his rival and suppress it as he does his enemy, in order to avoid its evil and bad consequences.”
He continues to quote him

:
“He should rarely laugh at what amuses others, given the ill effects of excessive laughter. Of course, if something consistent with what is correct pleases him, he should smile. But, he should hate joking, for fear of frivolity; if he does joke, he must utter nothing but the truth. His countenance ought to be cheerful and his words kind. He should not attribute to himself praiseworthy qualities that he does not possess. Moreover, he should be very cautious, so as not to be overcome by his desires and displease his Lord. He must not backbite or despise anyone, rejoice over the misfortunes of others, or oppress, envy or think ill of anyone unless [the behavior of] a person warrants it. He should check any of his organs from disobeying Allah The Almighty, and endeavor not to harm people either by words or deeds. Such a man must neither do wrong to nor oppress anyone, and forgive and exhibit patience with those who do, respectively. Also, he should control his temper in order to please Allah The Almighty and to frustrate his enemy. He should be humble and accept what is right, regardless of who guides him to it. He must seek glory through obedience to Allah The Almighty, not through creatures.”
Bishr ibn Al-Haarith narrates that ‘Eesa ibn Yoonus

further cautioned:
“He should not use the Quran as a means to earn his living or to achieve any of his worldly aims, like getting close to the powerful or wealthy. He should live like the rich if he is so and like the poor if he is among them. He should be dutiful to his parents, such that he treats them with humility, addresses them politely, supports them financially and shows gratitude to them, especially when they reach old age. Moreover, he should maintain the ties of kinship and detest severing them, even with those who cut off relations with him. He should repay evil with good and be of benefit to whoever accompanies him. He should always be lenient in teaching others, and must not scold whoever makes a mistake or embarrasses him. In fact, this quality must pervade all his affairs and he should be patient when teaching others good. The learner should like his company and he must be of benefit to whoever sits with him.”
‘Abdullaah ibn ‘Umar, may Allah be pleased with him, once said: “Although we were the first generation of this Ummah, a revered Companion of the Prophet

would memorize only a chapter of the Quran or so. Memorizing it was difficult for them, but they were guided to apply it. However, the latter generations of this [Muslim] nation will find the Quran so easy to memorize that little children and insincere Muslims will learn it by rote, but will not implement it.”
Mujaahid, may Allah be pleased with him, commented that the verse (which means): {Those to whom We have given the Book recite it with its true recital}[Quran 2: 121] refers to them “truly applying it.”
Furthermore, ‘Abdullaah ibn Mas‘ood, may Allah be pleased with him, said: “The one who memorizes the Quran should pray at night while others are asleep and fast in the day while others are not fasting. He should be pious even if others are not and modest when people may be arrogant. [Such a person] should be known for his solemnity while people are jubilant and silence while others indulge in idle talk.”
Similarly, Al-Fudhayl ibn ‘Iyaadh

said: "The one who memorizes the Quran is the bearer of the banner of Islam. He should not indulge in ill speech or be inattentive or frivolous, though others may be so."
May Allah The Almighty make us among those who acquire the manners and morals of the Quran.