The Essence of Islamic upbringing in the Hajj – I 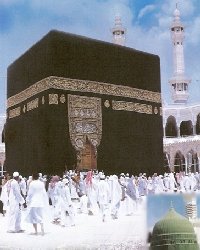 During the Hajj months, a Muslim starts his blessed journey from the the Meeqaat (place of entering the sacral state). He determines his intention and chooses one of the three types of Hajj: Tamattu‘, Ifraad or Qiraan.

Likewise, when the Muslim ends the Hajj journey, he has two options, either hastening at the end of the 12th day of Thul-Hijjah before sunset or delaying until the 13th day.
It is incumbent upon us to reflect upon the wisdom behind these options stated by the Prophet,

(which have been affirmed by the scholars of Fiqh (Islamic jurisprudence), and the difference in opinions among the scholars regarding the best type of Hajj as well as the Divine mercy in the verse in which Allah The Exalted Says (what means): {And remember Allah during [specific] numbered days. Then whoever hastens [his departure] in two days - there is no sin upon him; and whoever delays [until the third] - there is no sin upon him - for him who fears Allah. And fear Allah and know that unto Him you will be gathered.} [Quran 2: 203]
Looking deeply into the meanings behind texts, extending them beyond the topic of Hajj and reflecting on the options in the Hajj journey, opens a great gateway to understanding the Islamic methodology. It sheds light on an issue which has preoccupied many people throughout the different ages. It is the issue of having “multiple sound opinions”. It is one of the most important aspects exemplifying the Muslim mindset as well as its pillars which we call to, in order to increase our understanding and know how to establish a balance among rulings or give preponderance to certain rulings. Understanding how to do that is the basis on which the structure of the Sharee‘ah (Islamic legislation) policy is based.
Moreover, understanding how to give priority to a certain ruling is inextricably linked to this topic and therefore it should not be neglected.
Based on these two issues of Fiqh, giving preponderance and weighing options is performed on the basis of choosing the soundest and the better option.
In the end, we conclude that the availability of options during the Hajj stands as evidence that the methodology is wide and that Sharee‘ah is flexible. It is also a sign of the maturity and broad-mindedness of the advocates of this methodology as well as their trust in the sublimity of their idea to which they call for.
If these issues were important in the past, their importance increases during the current stage of contemporary civilizational struggle, when the proponents of Islamic civilization are accused of rigidity, ossification and having a unilateral perspective of matters.
The importance of creating a united method for change:
The pilgrim starts Tawaaf  (circumambulation) with touching the Black Stone with his right hand and then kissing it. If he is unable to kiss the Stone, he can kiss his hand after touching it. If he is unable to do so, he faces the Stone and points out to it but without kissing his hand. He says: "Bismillaah, Allah-u-Akbar, Allahumma eemaanan bika, wa tasdeeqan bikitaabika, wa wafaa’an bi‘ahdika, wa itibaa‘an lisunnati Nabiyyika Muhammad

(In the Name of Allah, Allah-u-Akbar, O Allah, I do that out of belief in You, holding Your Book truthful, fulfilling Your Covenant and following the Sunnah of Your Prophet, Muhammad,

)."
Then, the pilgrim faces the Yamaani corner with his right hand and completes seven rounds along with doing the two recommended acts of Idhtibaa‘ (uncovering the right shoulder) and Ramal (walking fast with short steps) during the first three rounds.
Reflecting on this pillar of Hajj from the viewpoint of this study, which deals with the aspect of Islamic upbringing, we observe that several important issues emerge:
First: When a Muslim looks at the large numbers, who, despite the difference in race, color, country and language, are united in their dress, deeds and slogans. This lays stress on the fact that this religion is the certain truth, and the only one determined by Allah The Almighty to unite the Ummah (Islamic nation). Other ideas which were imported by some Muslims failed to achieve this unification and they were like diabolical plants which are alien to our soil.
Second: The importance of having a pivotal factor which is essential to awaken the whole Ummah, be a beacon of enthusiasm and drive the feelings of everyone -- whether the individual or the whole Ummah. Although large numbers are united in dress, deeds and slogans, the problem is the absence of the idea which unites the Ummah's interests and drives the feelings of all Muslims.
Repeatedly, Muslims have tried to find projects that reunite the Ummah and drive the feelings of all Muslims. This is because a nation which is not united by a serious and momentous issue, such as loss of its first Qiblah (direction of prayer), the place from where the seal of the Prophets,

, ascended to heaven during the journey of Israa’ and Mi‘raaj and the place which is the origin of all the Divine messages, will not be united by any other issue.
Sadly, many Muslims are heedless of this very important issue which is likely to mobilize the Ummah, draw the attention to the danger which threatens them all and resist the Western Zionists who threaten the whole Ummah.
As for the Muslim individual, outwardly, everyone makes Tawaaf around one axis, repeats the same words, sheds tears, but in reality, each one is crying over his own sorrows. Indeed, it is exactly as the Prophet,

, said: "Deeds are judged by intentions." [Al-Bukhari]
Third: The importance of organization; which is known as “the Fiqh of coordinating efforts, saving energies and utilizing potentials”. This issue is apparent in all the rites of Hajj. At a particular time and in particular places, millions of pilgrims move smoothly and easily according to a wonderful and almost miraculous order. It is impossible for such a thing to happen without the precise organization stated by the Prophet,

, when he performed Hajj in the 10th year after Hijrah. The Muslims follow his example up until to day, neither altering nor distorting his tradition.
Fourth: When the caller to Allah The Almighty looks at these millions from a quantitative perspective, his soul is filled with hope and he remembers the founder of this great rite, the intimate friend of Allah The Almighty, Ibraaheem, may Allah exalt his mention, when he was standing alone and calling out for Hajj as Allah The Almighty commanded him: "Call and We will proclaim the message." The result is these countless crowds which come from everywhere until the advent of the final hour, some of them walking and others riding from all parts of the earth, their hearts filled with longing and inclined to this purified place.
This asserts the importance of understating the role of the caller and the promised reward. A caller to Allah The Almighty is required to proclaim the message and the results rest with Allah The Almighty, who blesses the caller's great reward when he fulfills his role in proclamation. Likewise are the bearers of this great Divine message and the advocates of Islamic civilization. Allah The Almighty entrusted them with a job, or certain role, and promised them a great reward when they perform this job to the best of their ability.
The caller to Allah The Almighty must understand the essence of his job, the methodology of fulfilling it, the resultant reward, the manner of fulfilling obligations, presenting the great Divine message in the best manner. The most important thing is that he feels the unique interaction and collaboration between the human role and Divine assistance for the desired unity of the Ummah. This point is the beacon that gives hope for workers and the distinguishing mark which differentiates them from others who adopt different projects.
Fifth: When the caller to Allah The Almighty takes another look from the qualitative point of view, his heart becomes full of sorrow when he contemplates the vast difference between the stature of the few numbers which made Tawaaf with the Prophet,

, and their impact in shaping the events of the universe around them and their role in making history, and the weight of these contemporary crowds who perform the same Tawaaf and repeat the same words, but who are afflicted with the disease of this age, making them like the proverbial froth.
The meanest of all nations summon each other to attack them, scatter their forces with ease causing them to become marginalized. It is the stage against which the Prophet,

, had warned in the Hadeeth in which he said: "It would so happen that people from each place summon one another to attack you as when people eating invite others to share their dish." A man asked, "Will that be because of our small numbers at that time?" He replied: "No, you will be numerous at that time; but you will be scum like that carried down by a torrent; and Allah will remove fear of you from the hearts of your enemy while He will throwWahn into your hearts." They said, "O Messenger of Allah, what isWahn?” He replied: "Love of this world and hate for death." [Abu Daawood]

After reflecting on this lesson, the caller to Allah The Almighty returns to a realistic view to review his methodology and therefore he realizes the importance of focusing on upbringing. He, therefore, gives due importance to the qualitative assessment for his efforts and is not deceived by large numbers which are ineffectual like scum and herds.
The Essence of Islamic Upbringing in the Hajj - II