The Essence of Islamic Upbringing in the Hajj - II 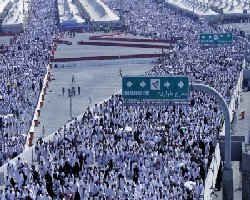 Sixth: When a Muslim touches the Black Stone, he feels tranquility and looks for the promise of the Prophet,

, in the Hadeeth (narration): "Wiping over them (the Black Stone and the Yamaani Corner) removes sins completely." [Ahmad]

Seventh:  When the caller to Allah The Almighty reflects on the Sunnah (Prophetic tradition) of Ramal (brisk jogging) during the first three rounds of Tawaaf (circumambulation), he would come to realize the significance of the keenness of the Prophet,

, that the Muslims' behavior and movement be a symbol to repel the enemies' cunning, refute the allegations and rumors repeated by the Jews that the fever of Yathrib had afflicted the Muslims.
Thereafter one would undoubtedly grieve for the reality of his Ummah because what were once mere rumors about the weakness afflicting the Muslims have become a bitter fact. Contemporary Muslims are afflicted with a far more dangerous disease, which is that of inner weakness and psychological defeat.
Through these issues a caller to Allah The Almighty realizes the importance of participating in the contemporary civilization through advocating the ideals of the Islamic civilization. Only by these means can our Ummah can challenge the Western Zionist project.
If the Ummah's interests and efforts are united and Muslims focus on a single, united approach for change, this may remove the state of weakness and show the enemies of the Ummah the real meanings of power and glory.
Promoting the spirit of facilitation:
After concluding Tawaaf (circumambulation) and before Sa‘y (circuits between Al-Safa and Al-Marwa), it is recommended for the pilgrim to perform two Rak‘ahs (units of prayer) behind the standing place of Ibraaheem, may Allah exalt his mention, even if not immediately behind it. If he cannot do that, he can perform the prayer in any other place. After reciting Al-Faatihah, it is recommended to recite Soorah  Al-Kaafiroon in the first Rak‘ah, and Al-Ikhlaas in the second.
Then, it is recommended for him to go to the water of Zamzam, drink from it and pour water on his head. If he can do so, the pilgrim then returns, says Takbeer and faces the Black Stone.
Reflecting on these recommended acts as well as their places we observe that they are repeated in different manners along the journey of Hajj. We also observe that they are performed in the intervals between the more difficult rites of the Hajj.
In other words, it is as if they are moments to catch one’s breath before starting rituals which need effort and hard work.
Reflect on these several intervals for rest in this spiritual atmosphere. They are repeated in different manners and times, such as the Day of Tarwiyah (the 8th day of Thul-Hijjah) before going out to ‘Arafah, and spending the night at Muzdalifah before the hard rites of the day of Nahr (the 10th day of Thul-Hijjah) of throwing pebbles, slaughtering, shaving and Tawaaf.
This lesson shows us a great facet of Islamic methodology and directs us to a great characteristic of this civilization, which is taking into consideration human nature as well as the capabilities of the participants. This also indicates that this methodology is easy, practical and suitable for all.
Reflect on how the Prophet,

, considered the different capabilities of his Companions, may Allah be pleased with them. Therefore, he instituted Jihaad, which is the peak of Islam, in degrees and ranks in order not to deprive anyone from the honor of fulfilling it, even if he has a weak morale and capabilities, and even if he confesses this. That is because Jihaad is the Muslims' road to victory and the source of glory, and therefore all Muslims should participate in it. Therefore, Hajj is classified as the degree of Jihaad for weak people. It was narrated on the authority of Al-Hasan bin ‘Ali, may Allah be pleased with them, that he said, "A man came to the Prophet

, adopted a moderate approach where he considered the human nature as well as limits of human capabilities. In a Hadeeth, he said: "Do (good) deeds which are within your capacity as Allah never gets tired of giving rewards till you get tired of doing good deeds." [Al-Bukhari]
This is the spirit of the Islamic religion and the base of the Divine principle on which the Islamic methodology is based. Allah The Exalted Says (what means): {Allah intends for you ease and does not intend for you hardship.} [Quran 2: 185]
The caller to Allah The Almighty learns from this how to consider  human nature and the participants' capabilities, appoint each one in the job best suited for them and not make anyone feel that his job is better than that of the other.
Just as a parade needs strong persons in the vanguard and a building needs firm pillars, there are also those who are needed to buttress the structure in the next level. Indeed, they are surely lesser in their capabilities and degrees; yet, each one has certain abilities and capacities which should be taken into account. Moreover, each one has a role and no one can play this role instead of him and each one guards a place and none can guard it instead of him. Each one has an excellence and a position that no one can undermine.
A caller to Allah The Almighty is also required to allocate times for entertainment and leisure, provided that they are governed by the Sharee‘ah (Islamic legislation) regulations and determined by the goals and purposes behind it. A caller to Allah The Almighty is a Mujaahid who never forgets his core concerns even if he is relaxing for some time. These periods of permissible leisure and entertainment should not be long in order not to cause him to forget his chief task.
This is part of moderation, or balance and reasonability, as the Prophet,

, said to Hanthalah, may Allah be pleased with him: "O Hanthalah, an hour and an hour! (i.e. everything has its proper time)." [Muslim]
The woman's role in Islamic upbringing and civilization:
After Tawaaf, the pilgrim goes to the place of Sa‘y. When he approaches the mountain of As-Safa, he recites the verse in which Allah The Exalted Says (what means): {Indeed, As-Safa and Al-Marwah are among the Symbols of Allah. So whoever makes Hajj to the House or performs ‘Umrah - there is no blame upon him for walking between them. And whoever volunteers good - then indeed, Allah is appreciative and knowing.} [Quran 2: 158]
Then he says, "I start with that with which Allah has started." Then, he starts from As-Safa. He ascends the mountain and then looks at the Ka‘bah, says Takbeer, declares the oneness of Allah The Almighty and supplicates thrice seeking goodness of the two worlds. Then, he starts Sa‘y moving towards Al-Marwah, mentioning Allah The Almighty and supplicating Him while he is walking. Then, he walks with fast and short steps between the two green signs. Then he walks again until he reaches Al-Marwah. He ascends it and does the same actions as on As-Safa. Then he returns to As-Safa and repeats this seven times.
When we reflect on this great ritual of the Hajj, which is part of its pillars and obligations from the viewpoint of Islamic upbringing and its significance as one of the pillars of Islamic civilization, first of all we observe that it has been prescribed for the Ummah, as mentioned in the Hadeeth: "Perfom Sa‘y, for Allah has made Sa‘y obligatory on you." [Al-Minhjaaj Fi Yawmiyyaat Al-Haaj]
The rationale behind this is to connect the Ummah to its shining history and remind it of its original historical roots until Allah The Almighty inherits the earth as well as everything on it.
It reminds the Ummah of the hardship undergone by Haajar, the patient, believing and enduring woman who exerted herself while looking for water for her suckling child after the water in the water-skin was used up. She became thirsty and her child too became thirsty. She started looking at him (i.e. Ismaa‘eel (Ishmael) crying and turning (according to another narration: he was tossing in agony and beating the ground with his legs. According to a third narration: he was licking his lips with his tongue to wet them). According to reports, he was two years old at that time.
She left him, for she could not endure looking at him in that state, and found that the mountain of As-Safa was the nearest mountain to her on that land. She stood on it and started looking at the valley keenly so that she might see somebody, but she could not see anybody. Then she descended from As-Safa and when she reached the valley, she tucked up her robe and ran in the valley like a person in distress and trouble, till she crossed the valley and reached Al-Marwah mountain where she stood and started looking, expecting to see somebody, but even here, she could not see anybody. She repeated that (running between As-Safa and Al-Marwah) seven times.
Ibn ‘Abbaas, may Allah be pleased with them, added, the Prophet,

, said: "This is the source of the tradition of the Sa‘y of people between them (Safa and Marwah). When she reached Marwah (for the last time) she heard a voice and she asked herself to be quiet and listened attentively. She heard the voice again and said, 'O (whoever you may be)! You have made me hear your voice; have you got something to help me?" And behold! She saw an angel (Jibreel) at the place of Zam-Zam, digging the earth with his heel (or his wing), till water flowed from that place.” [Al-Bukhari]
Reflecting on this great experience, we can deduce some great lessons concerning upbringing and other subsidiary issues.

The Essence of Islamic upbringing in the Hajj – I