The Inner Dimensions of Hajj - II 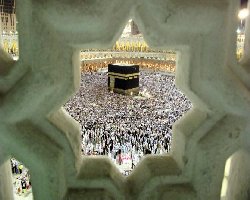 The opposite of discipline is disorder, indiscipline, violation and transgression. This has dangerous effects within oneself as well as within the Muslim community. Let us reflect on this great advice from the beloved Prophet,

, which indicates that external and internal order are firmly connected. It is a red signal to warn and indicate that external deviance is reflected on hearts. In a Hadeeth (narration), the Prophet,

, said: "Do not differ lest your hearts differ as well." [Muslim]

A caller to Allah The Almighty is worthier of adhering to the spirit of regimentation and discipline. Mere signs are enough for an intelligent person to understand, how would he act when he receives a clear and manifest Prophetic hint?
The importance of declaring identity:
Starting from the Mawaaqeet and during the Hajj months, a Muslim assumes Ihraam when he intends to perform either Hajj or ‘Umrah. He takes off his clothes and wears the Ihraam dress, which consists of two white clean sheets, Ridaa’ (the upper sheet) and Izaar (the lower sheet). A woman wears whatever she wants of permissible clothes while ensuring that there is neither impermissible exposure of beauty nor adornment. Before Ihraam, it is recommended to make Ghusl, apply perfume (for men) and wear clean clothes.
When a Muslim assumes Ihraam, he is required to loudly repeat Talbiyah, saying: "Labbayka Allahumma labbayk. Labbayka laa shareeka laka labbayk. Innalhamda wan-n‘imata laka wal-mulk, laa shareeka lak (O Allah, I answer Your Call, there is no partner with You, to You Alone belongs praise, favor and sovereignty, there is no partner with You)”. Thereafter, a pilgrim is required to avoid the known restrictions of Ihraam.
Reflect on the ritual of Hajj in the context of the verse in which Allah The Exalted Says (what means): {Indeed, Allah will not change the condition of a people until they change what is in themselves.}[Quran 13: 11], we are convinced that the desired change is the internal change of the human self and essence. We are also certain that Allah The Almighty does not treat people according to their appearance. In a Hadeeth, the Prophet,

, said: "Allah does not look at your bodies or shapes; rather, He looks at your hearts and deeds." [Muslim]
Nevertheless, wearing the Ihraam directs us to another important perspective from the point of Islamic upbringing: a person who seeks internal change should not neglect external change. The human is one unit which can not be divided into parts. External disorder causes a far-reaching internal effect. I have already referred to the advice of the Prophet,

, in the Hadeeth: "Do not differ lest your hearts differ as well." [Muslim] Likewise, we have been enjoined to straighten rows in prayer for fear of causing an internal effect. In a Hadeeth, the Prophet,

, said: "Straighten your rows or Allah will cause dissension among you ." [Al-Bukhari]
Ihraam is a symbol for shifting from one stage to another. It marks the beginning of a covenant between the Muslim and his Lord. He asserts his truthful intention to change and adheres to this externally by wearing the Ihraam dress. One also publicly declares this through repeating the Talbiyah so that people know about this covenant as well as the consequences of abandoning the restrictions of Ihraam. We can even understand and deduce the inner dimension of Talbiyah through the Hadeeth in which the Prophet,

, said: "When any pilgrim utters Talbiyah, every stone and tree on his right and on his left responds with a (similar) Talbiyah, until the whole earth resounds with it." [Ibn Khuzaymah]
Reflect on this call and the act of repeating Talbiyah loudly as well as its external and internal impact and how it is related to the call of the founder of this great rite, the intimate friend of Allah, Prophet Ibraaheem (Abraham), may Allah exalt his mention, when Allah The Almighty commanded him to call people and proclaim the message. Allah The Almighty promised him that He will convey his call to all people. Allah The Exalted Says (what means): {And proclaim to the people the ْHajj [pilgrimage]; they will come to you on foot and on every lean camel; they will come from every distant pass.}[Quran 22: 27]
It means: announce Hajj to mankind and call them to perform Hajj to this House which We have commanded you to build. It was said that Ibraaheem, may Allah exalt his mention, said, "O Lord, how can I convey this to people when my voice will not reach them?'' It was said, "Call them and We will convey it. '' So Ibraaheem, may Allah exalt his mention, stood up (on his place, or on the Black Stone, or on (the mountain of) As-Safa or on (the mountain of) Abu Qubays and said, "O mankind! Your Lord has established a House so come for pilgrimage to it.'' It is said that the mountains lowered themselves so that his voice would reach all the corners of the earth, and those who were still in their mothers' wombs and their fathers' loins would hear the call. The response came from everything that heard him, from stones, trees, and those whom Allah has decreed will make Hajj, until the Day of Resurrection: "We answer your call, O Allah, we answer your call." [Ibn Katheer]
It is the slogan of declaring identity. It also indicates that this rite is universal and brings happiness to all creatures, that all beings respond to it and that the Lord of all creatures and the whole universe blesses this rite.
It is the symbol of distinction which differentiates between the advocators of this great Divine rite and the advocators of other contrary earthly projects. It differentiates between this journey to which the whole existence responds and the human nature finds comfort in, and other projects which, if they do not clash, go against existence and are alien to the human nature.
The challenge involved in this journey which makes it sublime over all other projects is depending on Allah The Almighty, Who blesses it, purifies it and takes pride before the angels with it. It was narrated that the Prophet,

, once went out and found his Companions sitting in circles. He asked: "What made you sit?" They said, "We sat to remember Allah The Almighty and praise Him for guiding us to Islam and bestowing other favors on us." He said: "Would you swear by Allah that you have sat for this only?" They said, "By Allah, we have sat only for this." He said: "I did not ask you to swear because I doubt your intention. Rather, Jibreel (Gabriel) came to me and told me that Allah boasts of you before the angels." [Muslim]
Thus, we come to realize the universal effect of this great rite of Hajj. This is in addition to its internal effects which overwhelm the spirit and for which the heart palpitates out of yearning and love. This is in response to the supplication of the intimate Friend of Allah, Ibraaheem, may Allah exalt his mention, which he raised on one of the days of this great project. Allah The Exalted Says (what means) through his words: {Our Lord, I have settled some of my descendants in an uncultivated valley near Your Sacred House, our Lord, that they may establish prayer. So make hearts among the people incline toward them.} [Quran 14: 37]
Therefore, this is a tangible declaration of commitment to the covenant of change, a shift from the past with all its negative deeds and entering into the future through the gateway of the present time.
Callers to Allah The Almighty who are active in this field realize the significance of this work as well as its abundant meanings, the importance of this shift and transcending the stage of heedlessness to the stage of working in order to perform this great Islamic ritual.

The Inner Dimensions of Hajj - I