"But what reaches Him is piety from you" 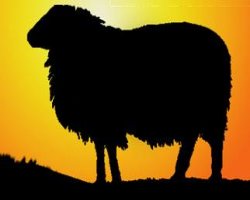 Udh-hiyah (sacrificial animal of `Eed) is one of the rites of the Islamic religion that was legislated by the Prophet,

, as a means of drawing near to Allah and showing gratitude to His Favors upon the believing slaves, and out of following the example of Prophet Ibraaheem (Abraham), may Allah exalt his mention. Allah Says (what means):

The legislation of offering Udh-hiyah is established in the Quran, Sunnah (Prophetic tradition) and consensus of scholars. It is one of the best acts through which the slave draws near to Allah. Allah legislated it for many reasons and wisdoms. The Prophet,

, performed it in response to the order of His Lord and to be a legislation for his Ummah (nation) after him. Allah Says (what means): {So pray to your Lord and sacrifice [to Him alone].} [Quran 108:2] The Prophet,

, slaughtered two horned, black and white rams as an Udh-hiyah.
In the following lines, we will try to touch briefly upon the most important purposes for which Udh-hiyah was legislated, believing that behind every rule of Allah there is wisdom and a purpose which may be known to some people and unknown to others.
One of these purposes is to enable people who are not performing Hajj accompany the pilgrims in doing rituals. Pilgrims perform Hajj and offer Hady (sacrificial animal offered by pilgrims). People who are not performing Hajj are encouraged to slaughter an Udh-hiyah. So, they have a share of what pilgrims do. Therefore, they are forbidden to clip their hair or nails during the first ten days of Thul-Hijjah in order to partake in the worship of Allah with those who are in the state of Ihraam (in Hajj) by avoiding these acts and drawing near to Him by slaughtering Udh-hiyah.
One of the most important purposes of offering Udh-hiyah is to express that worship is due only to Allah alone and a way to devote worship to Him alone by mentioning His Name and glorifying Him while slaughtering the animals. Allah Says (what means):
One act of guidance of the Prophet,

, before slaughtering the Udh-hiyah was to mention the Name of Allah and glorify Him, saying Bismillaah Allahu Akbar, responding to the Order of Allah. Slaughtering is one of the great acts of worship that Allah ordered His slaves to devote to Him alone. Allah Says ordering His Prophet (what means): {Say, "Indeed, my prayer, my rites of sacrifice, my living and my dying are for Allah, Lord of the worlds.} [Quran 6:162]
Slaughtering animals for the sake of any other than Allah results in apostasy of the doer because slaughtering sacrificial animals is an act of worship that must be performed for Allah alone. If the sacrificial animal is offered for the sake of other than Allah, then, this practice is polytheism. Allah made whatever is slaughtered for the sake of other than Him or a name other than His Name was mentioned upon slaughtering it; Allah made such animals unlawful to eat. Allah Says (what means): {Prohibited to you are dead animals, blood, the flesh of swine, and that which has been dedicated to other than Allah} [Quran 5:3] The Messenger of Allah,

, cursed the person who slaughters sacrificial animals for the sake of any other than Allah.
Another purpose of offering Udh-hiyah is to praise and thank Allah for His Favors and show gratefulness to Him. Allah Says (what means): {Thus have We subjected them to you that you may be grateful.} [Quran 22:36] Offering sacrifice with a portion of the favors of Allah is gratitude for He who bestowed that favor. The real gratitude is represented in obeying Allah as Allah Says (what means): {[We said], "Work, O family of Daawood (David), in gratitude." And few of My servants are grateful.} [Quran 34:13]
One of the great purposes behind offering sacrificial animals is to enhance the fact that reward is determined by hearts and deeds, not by appearances and forms. Therefore, Allah Says (what means): {Their meat will not reach Allah, nor will their blood, but what reaches Him is piety from you.} [Quran 22:37] In an authentic narration, the Prophet,

, said: “Allah neither looks at your figures nor properties; rather, He looks at your hearts and deeds.” The purpose of offering Udh-hiyah is to achieve piety of hearts and glorification of Allah, The All-Knowing of the Unseen. Allah is free from need of the worlds. He does not benefit from these sacrificial animals nor does anything of it reach Him. He only wants His slaves to be pious and fear Him so that their worldly life becomes reformed and He honors them in the Hereafter. Allah is free from need for them and their sacrificial animals.
People in the Pre-Islamic era used to slaughter sacrificial animals and place the meat over their idols and stain them with the blood of these slaughtered animals. Allah invalidated these practices and clarified that the goal behind these sacrificial animals is to obey Allah by fulfilling His orders and avoiding His prohibitions.
Another purpose is to serve as a reminder of the story of Ismaa‘eel (Ishmael), may Allah exalt his mention, who was about to be slaughtered. His story includes lessons, admonitions, signs and miracles that increase the certitude and steadfastness of the believer especially in times of stress, trials and afflictions.
In addition to the aforementioned purposes, offering Udh-hiyah results in spending on one’s family generously; giving of its meat is generosity to one’s friends and neighbors; giving some of its meat in charity results in providing the poor and needy with their needs sufficiently and saving them from begging on this day.
A Muslim should keep in mind these goals for which offering Udh-hiyah is legislated. He should be keen on following this Sunnah and know that all goodness lies in the guidance of the last of Prophets, Muhammad the leader of Messengers,