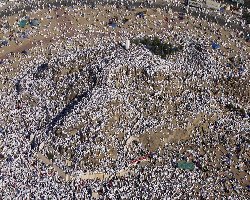 ·          {O mankind, fear your Lord, Who created you from one soul and created from it its mate and dispersed from both of them many men and women. And fear Allah, through Whom you ask one another, and the wombs. Indeed Allah is ever, over you, an Observer.} [Quran 4:1]

·          {O you who have believed, fear Allah and speak words of appropriate justice. He will [then] amend for you your deeds and forgive you your sins. And whoever obeys Allah and His Messenger has certainly attained a great attainment.} [Quran 33:70-71]

It should be known to you, dear reader, that Allah The Almighty has special seasons and gifts which He confers upon whomever He favors of His slaves. Happy is the one who avails himself of those times, and comes close to his Lord, the Lord of the heavens and earth, perchance he would receive one of those gifts, which would make him happy and save him from being wretched.

Among these blessed times are the first ten days of Thul-Hijjah. They are the best days in this World, during which Allah The Almighty legislated Hajj (pilgrimage) to His Sacred House.

Hajj is one of the great pillars and fundamentals of Islam, and one of the best and the most glorious acts of worship that bring one close to Allah The Almighty, and please the Lord of the heavens and earth. It is the act of worship [that is to be performed once] in the entire lifetime, the crowning accomplishment of religious obligations, the perfection of Islam and completion of faith.

During Hajj, all the people [Muslims] stand in one place and hear the Statement of Allah The Almighty (which means):

They also hear the statement of the Prophet,

, that is proven in both Saheehs: "Islam is built on five (pillars)… (including) and making Hajj to the House (the Ka‘bah) for whoever is able to find thereto a way." [Al-Bukhari and Muslim]

They also hear the statement of the Prophet,

According to the wording of Imaam Ahmad

on the authority of Maa‘iz, the Prophet,

was asked about the best of deeds, thereupon he said: "To have faith in Allah alone, then take part in Jihaad (fighting in the cause of Allah), and then perform an accepted Hajj that excels all deeds (whose reward is as much) as what is between the rising and setting of the sun." [Ahmad]

According to the narration of Ibn Hibbaan on the authority of Abu Hurayrah, may Allah be pleased with him, the Prophet,

Thus, people have been divided into four types, consider then to which of them you belong.

The first type: Those who have money and who long for the Sacred House of Allah:

1- Blessed be this type of people! Why not, since Allah The Almighty appreciates their effort and forgives their sin?

Whoever sets out to the House (Ka‘bah for Hajj), his previous sins would be forgiven for him.

a- In this context, it was narrated on the authority of ‘Amr ibn Al-‘Aas, may Allah be pleased with him, that he said, "When Allah put the love of Islam in my heart, I came to the Prophet

Allah The Almighty then made setting out to the House (for Hajj) a reason for effacing all previous sins, erasing all preceding wrongdoings and faults, removing all prior mistakes and causing the pilgrim to get rid of his sins and become as pure (sinless) as he was on the day his mother gave birth to him.

b- It was narrated on the authority of Abu Hurayrah, may Allah be pleased with him, that he said that he heard the Prophet,

, say: “Whoever performs Hajj for the sake of Allah during which he neither has sexual relation (with his wife), nor disobeys nor sins, then he will return (after Hajj as sinless) as he was on the very day his mother gave birth to him." [Al-Bukhari and Muslim]

said in Fat-h Al-Baari, "It seems to refer to forgiving all sins, be they major or minor, and their evil consequences."

This Hadeeth is among the strongest evidences in support of Ibn Maajah's narration on the authority of Al-‘Abbaas ibn Mirdaas.

It was narrated on the authority of Al-‘Abbaas ibn Mirdaas that the Messenger of Allah,

, invoked forgiveness for his Ummah (Muslim nation) in the evening (prior to the day) of ‘Arafah, and his invocation received answer (from Allah The Almighty Saying what means):

“‘I have forgiven them save the wrongdoer, from whom I take up the right of the wronged one.’ The Prophet

said: ‘O Lord! If You so like, You could give the wronged one from Paradise, and forgive the wrongdoer!’ However, he received no answer on that evening. When morning came upon him and he was at Muzdalifah, he repeated the invocation, and then received the answer for what he asked. On that the Messenger of Allah

laughed (or he (the narrator) said smiled). Abu Bakr said, ‘Let my father and mother be sacrificed for you! You never used to laugh at that time. What caused you to laugh, may Allah keep you cheerful?’ On that he said, ‘When Satan, the enemy of Allah, knew that Allah fulfilled my invocation and forgave all of my Ummah, he took dust and started throwing it over his head, invoking destruction upon himself. Thus, I laughed upon seeing him so grieved.’” [Ibn Maajah and Ahmad]

Furthermore, Allah The Almighty Says (what means): {but He Forgives what is less than that for whom He wills.} [Quran 4:48] i.e. their wronging each other but not Shirk (polytheism).

In his comment on the following Hadeeth of the Prophet,

: “Whoever performs Hajj for the sake of Allah during which he neither has sexual relation (with his wife), nor disobeys nor sins, then he will return (after Hajj as sinless) as he was on the very day his mother gave birth to him",Al-Munaawi

said in Faydh Al-Qadeer, “It means the pilgrim's being purified from sins, and it includes major and minor sins. That is the opinion of Al-Qurtubi and ‘Iyaadh. However, At-Tabari said, ‘In relation to wrongdoings, it is construed to address the one who repents but fails to amend them.’”

said, “It addresses only the sins that pertain to the right of Allah not of the slaves. However, the right itself does not lapse. If one has a prayer to perform, only the sin of delaying it, and not the prayer itself, lapses.”

To avoid that difference among scholars, whoever intends to perform Hajj should first fulfill the debt that is due on him, efface wrongdoings, turn to Allah The Almighty in repentance and show regret, before setting out to the Sacred House of Allah.