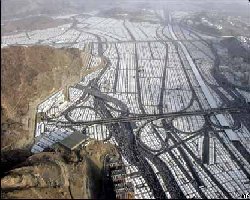 b- A man from the Thaqeef came to the Prophet,

, to ask him about Hajj, and what (reward) he could expect from it. On that the Prophet,

"If you come out from your house, setting out towards Al-Bayt Al-Haraam, your she-camel will not place a hoof nor lift another (on the way to the House) but that thereby Allah writes for you a good deed and removes from you a sin.

As for the two Rak‘ahs that you offer after Tawaaf (circumambulation), it (their reward) is equal to the (reward of) emancipation of a slave belonging to the offspring of Ismaa‘eel.

As for your Tawaaf around the As-Safa and Al-Marwah (mountains), it is equal to (the reward of) emancipating seventy slaves.

As for your standing in the night of ‘Arafah, Allah descends to the lowest heaven, and boasts to the angels of you saying, ‘My slaves have come to Me unkempt from every distant pass, seeking My Paradise. If your sins are like the grains of sand, raindrops or sea foam, I will forgive them for you. So, depart, O My slave, with your sins forgiven for you, and for whomever you intercede for.’

As for your throwing the pebbles, by each pebble you throw, a destructive major sin is removed from you.

As for slaughtering your sacrificial animal, (the reward of) it is kept (for you) with your Lord.

As for getting your head shaved, by each hair you shave, a good deed is recorded for you and a sin is erased from you.

As for your Tawaaf around the House after that, (it is sufficient that) you perform Tawaaf as sinless. An angel comes and places his hand between your shoulders, and says, ‘Be careful with what you do in the future, for your previous sins have been forgiven for you.’" [At-Tabaraani and Al-Bazzaar]

It was further narrated on the authority of Ibn ‘Umar, may Allah be pleased with him, that the Prophet,

, said: "The camels (walking on the way) to Hajj never lift a leg nor place a foreleg but that thereby Allah writes for him (the rider) a good deed, erases from him a misdeed or elevates him a degree." [Ibn Hibbaan] [Al-Albaani: Saheeh chain of narrators]

c- It was further narrated that the Prophet,

What dignity is greater than that which Allah The Almighty prepares for His guests and visitors and pilgrims of His Sacred House? He washes off their sins, purifies their souls, blesses them in their deeds, recompenses them for what they spend (in Hajj), answers their supplication, looks at them, boasts of them to the angels, rewards them for what they do Gardens (in Paradise), beneath which rivers flow and guards them against the evil of fires.

Allah The Exalted does not approve for the visitor of His House a reward other than Paradise:

a- It was narrated on the authority of Abu Hurayrah, may Allah be pleased with him, that the Prophet,

, said: "Performing two ‘Umrahs expiates sins that are committed in the interval between them; and the Hajj Mabroor (that is accepted by Allah) has no reward other than Paradise." [Al-Bukhari]

said in Fat-h Al-Qadeer, "The reward given to the pilgrim for Hajj is not only to remove some of his sins, but it should make him join the forerunners (to Paradise), or at least, cause him to enter Paradise without reckoning, otherwise, every believer would enter Paradise even though he did not perform Hajj."

b- It was further narrated on the authority of ‘Abdullaah bin Mas‘ood, may Allah be pleased with him, that the Messenger of Allah,

, said: "Perform Hajj and ‘Umrah again and again, for they remove poverty and sins in the same way as the bellow removes the impurities of iron, gold and silver; and the Hajj Mabroor (that is accepted by Allah) has no reward other than Paradise." [Ahmad and At-Tirmithi]

The reward of Hajj then is to be released from the fire (of Hell):

It was narrated on the authority of ‘Aa’ishah, may Allah be pleased with her, that The Messenger of Allah,

, said: “There is no day, on which Allah releases slaves from Hell more than the day of ‘Arafah, on which He comes near and boasts to the angels of them." [Muslim]

It (the reward of Hajj) is also to enter the Paradise of (Allah) the Most Merciful:

1- It was narrated on the authority of Abu Ad-Dardaa’, may Allah be pleased with him, that the Prophet,

, said: "If one comes with five things along with faith (in Allah), he will enter Paradise: to observe the five (obligatory) prayers with their due ablution, Rukoo‘ (bowing), Sujood (prostration) and due times; to fast Ramadan, to perform Hajj to the House (the Ka‘bah) for whoever is able to find thereto a way and to give Zakah (obligatory charity) with contentment."[At-Tabaraani] [Good chain of narrators]

2- It was further narrated on the authority of Mu‘aath bin Jabal, may Allah be pleased with him, that he said, "‘O Messenger of Allah! Tell me about a deed which causes me to enter Paradise and keeps me away from Hell.’ He said: ‘You have asked about a serious matter, and it is easy for whom Allah The Almighty makes it easy: to worship Allah alone and associate none with Him (in worship); to establish the (five obligatory) prayers; to give Zakah; to fast Ramadan and to perform Hajj to the House (Ka‘bah).’" [Ahmad and At-Tirmithi]

The second type: Those who have money and have not yet performed Hajj:

These people are in great danger and are committing a serious offense. However, before talking about this type, let us answer the following question:

Is Hajj due immediately or can be delayed indefinitely?

This question is debatable among scholars:

The majority of scholars, including Abu Haneefah

according to the more authentic narration, Abu Yoosuf, Maalik in an opinion reported on his authority, and Ahmad

are of the opinion that Hajj is due immediately and one sins by delaying it.

On the other hand, Ash-Shaafi‘i

is of the opinion that it is due but unhurriedly.

What is preponderant, as indicated by evidence, is that it is due immediately.

This is confirmed by the Quran, the Sunnah and the statements of the righteous predecessors of this Ummah, along with the linguistic and actual evidences.

First: evidence from the Quran:

Allah The Almighty says (what means):

Furthermore, Allah The Almighty warns us of the nearness of death. He says (what means): {Do they not look into the realm of the heavens and the earth and everything that Allah has created and [think] that perhaps their appointed time has come near?} [Quran 7:185]

In this verse it is clear that man should hasten to comply with the command (to do good), lest death would approach him abruptly while he is unaware.

1- It was narrated on the authority of Abu Hurayrah, may Allah be pleased with him, that he said that the Messenger of Allah,

, addressed them (the people) saying: "O people! Indeed, Allah has enjoined Hajj upon you. So, you should perform Hajj." [Muslim]

The command, in principle, is to be implemented immediately, unless one is diverted from it by anything. Henceforth, one should hasten (to do it).

2- It was further narrated that the Prophet,

, said: "Deliberation in everything (is good according to a certain version), except in the deeds of the Hereafter." [Abu Daawood]