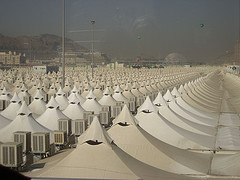 There are a set of Hadeeths which together are sufficient to support the argument in favor of the immediacy of performing Hajj. A mention may be made of the following:

, said: "Whoever wants to perform Hajj, let him hurry (to do so), lest the (would-be) patient would become patient, the riding mount would go astray or the need would seem urgent." [Ahmad and others]

said in Fat-h Al-Qadeer, "Of course the patient would never become patient (since he is currently patient). However, what is intended here is the healthy (and not the patient). Therefore, such as on the precincts of ailment is called (would-be) patient, just as the one on the precincts of death is called (would-be) dead. Similar to that is the Statement of Allah The Almighty (which means): {and not beget except [every] wicked one and [confirmed] disbeliever.} [Quran 71:27] i.e. is going to be wicked and disbeliever.

It was further narrated on the authority of Ibn ‘Abbaas, may Allah be pleased with him, that the Prophet,

, said: "Hasten to perform Hajj, for none of you knows what might befall him." [Saheeh Al-Jaami‘]

said in Al-Irwaa’, "Its chain of narrators is weak. However, it might be strengthened by the previous way of narration, therewith it promotes to the degree of Hasan. Anyway, ‘Abdul-Haqq authenticated it in Al-Ahkaam."

2- It was narrated on the authority of ‘Abdul-Rahmaan bin Thaabit, may Allah be pleased with him, that the Prophet,

, said: "Whoever was not detained by an ailment, nor by an apparent need, nor by a wrongful ruler and has not performed Hajj, then, let him (as it is the same for him) die as a Jew if he so likes, or as a Christian if he so likes." [Ahmad and others]

The same was narrated by Sa‘eed bin Mansoor in his Sunan, but with a slight variation of wording:

"Whoever dies without performing the Hajj that is enjoined upon him by Islam, and he was not impeded by a confining ailment, nor by a wrongful ruler, nor by an apparent need, then, it is the same for him to die in any state he likes, be he a Jew or a Christian."

3- It was narrated on the authority of Abu Sa‘eed Al-Khudri, may Allah be pleased with him, that the Prophet,

, said: “Allah The Almighty says, ‘Any slave whom I made healthy and enlarged his livelihood, spends five years without visiting Me is, indeed, deprived (of all good).’" [Ibn Hibbaan, Abu Ya‘la and Al-Bayhaqi]

However, this Hadeeth indicates that it is better if Hajj is performed every five years, whereas the obligatory Hajj is due only once in a lifetime.

1- It was narrated on the authority of ‘Umar bin Al-Khattaab, may Allah be pleased with him, that he said: "I was about to send men to the different regions to look for the wealthy among them who have not yet performed Hajj, and impose Jizyah on them. They are not Muslims! They are not Muslims!" [Al-Bayhaqi]

2- It was further narrated that the Prophet,

, (although the right is that it is a Mawqoof Hadeeth attributed to ‘Ali bin Abi Taalib, may Allah be pleased with him), that he said: "Whoever has provision or a riding mount to convey him to the Sacred House of Allah (to perform Hajj), and he has not performed Hajj, then, it is the same to him to die (on any religion other than Islam), be he a Jew or a Christian, due to the Statement of Allah The Almighty (which means): {And [due] to Allah from the people is a pilgrimage to the House - for whoever is able to find thereto a way. But whoever disbelieves - then indeed, Allah Is free from need of the worlds.} [Quran 3:97]” [At-Tirmithi]

3- It was further narrated on the authority of Ibn ‘Abbaas, may Allah be pleased with him, that the Prophet,

, said: "Whoever has money which enables him to perform Hajj to the Sacred House of Allah, and he has not performed Hajj, or on which Zakah is due and he has not given Zakah, he would ask Allah for return (to life once again) at the time of death." A man said to him, "Fear Allah, O Ibn ‘Abbaas! It is only the disbelievers who ask Allah for return (to life once again)."On that Ibn ‘Abbaas, may Allah be pleased with him, said,"Let me recite to you Quran (in confirmation of that). Allah says (what means): {And spend [in the Way of Allah] from what We have provided you before death approaches one of you and he says, "My Lord, if only You would delay me for a brief term so I would give charity and be among the righteous."} [Quran 63:10]” [At-Tirmithi]

{I would give charity} means to pay Zakah; {and be among the righteous} means to perform Hajj.

said, "A rich neighbor of mine died and he did not perform Hajj, so I did not offer funeral prayer on him."

Notice: All of this is to censure, and not to ascribe disbelief to, the one who left that obligatory duty despite his ability to do it.

There is consensus among Arab linguists that if a master orders his slave to bring him water and he does not implement the order immediately, he would have the right to discipline him, for it is not fitting for a slave to claim that this command might be implemented but not at once.

If we claim that Hajj is obligatory but unhurriedly, one of two things should be clear:

2- If we say that the fact of its being unhurriedly required has no end, it means that what might possibly be left endlessly could not be regarded obligatory, However, Hajj is established to be obligatory.

If it is argued that its end is the time to which one is likely to live, almost with certainty, the reply is that none could think about delaying it for death comes unexpectedly. Many people think that they would live for long years and then death attacks them suddenly. In confirmation of that, Allah The Almighty said (what means): {and [think] that perhaps their appointed time has come near?} [Quran 7:185]

What a great act of worship that is, by the loss of which, perfection is lost, and the one who leaves it is rendered equal, in error, to the Jews and Christians.