Reflections on the Ancient House 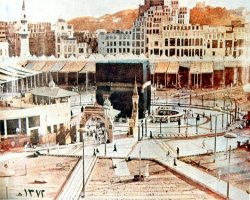 who came from the Republic of Gambia in the far west of Africa, was over eighty years old. I visited him before he died in his modest home in his small village near the capital, Banjul. He told me about his long trip fifty years ago to the Ancient House, walking along with four of his companions from Banjul to Makkah. They crossed the African continent from west to east. During the trip, they did not ride on mounts except for a few times, until they finally arrived at the Red Sea and then boarded a ship to the port of Jeddah.

It was a trip full of wonders and amazing incidents which if recorded would have been one of the most exciting and beneficial travel stories. The trip lasted more than two years. Sometimes they stopped at some cities to earn their sustenance, rest, supply expenses for the trip, and then continued walking.
I asked him, "Is not Hajj to the House obligatory only for the one who is able to perform it, while you were unable to do that at that time?"
He replied, "Yes. But we recalled the story of Ibraaheem (Abraham), may Allah exalt his mention, when he brought his family to an uncultivated valley near the Sacred House of Allah. Thereupon, one of us said, ‘We are now strong and healthy young people. What would be our excuse before Allah The Almighty if we did not go to perform Hajj? We also believe that we will only get weaker over a course of time. Then, why should we delay? In this manner, he spurred us on and urged us to make the trip to Makkah seeking the Help of Allah The Almighty."
Having sustenance enough for only one week, the five left their homes with the main intention of observing the command of Allah The Almighty of performing Hajj to His Ancient House. They experienced great hardship, frustration and distress. They spent many nights hungry until they were about to perish. Some nights they were chased by wild animals and did not enjoy the pleasure of sleep. Other nights they were afraid, as they were surrounded by highwaymen in every valley!
Haaj ‘Uthmaan said, “I was bitten one night during the trip and I suffered a severe fever and great pain, with which I could neither move nor sleep. I felt death moving slowly in my veins. My companions used to go to work while I remained under the shade of a tree waiting for their return at the end of the day. During these difficult moments, Satan whispered to me, ‘Would it not be better had you stayed at home? Why do you burden yourself beyond your capacity? Did not Allah The Almighty impose Hajj only on one who is able to perform it?”
“I felt heavy hearted and weak. When my companions returned, one of them looked at my face and asked me how I was doing. I turned my face away from him and wiped a tear which I could not prevent. It is as if he felt what I was going through and said, “Get up, perform Wudhoo’ (ablution) and pray. You will feel better, In shaa’ Allah.” Allah the Almighty Says (what means): {And seek help through patience and prayer, and indeed, it is difficult except for the humbly submissive [to Allah] who are certain that they will meet their Lord and that they will return to Him.} [Quran 2: 45-46]
Having done so, Allah The Almighty expanded my breast and removed my grief.”
Their yearning to reach the Two Holy Mosques did not leave them at all, and it relieved the pains of travel as well as the hardships and risks of the road. Three of them died along the way. The last of those three died at sea after he had said to his companions, “If you reach the Sacred Mosque, tell Allah The Almighty that I yearn to meet Him and ask Him to gather me and my mother in Paradise along with the Prophet

.”
Haaj ‘Uthmaan said,
When our third companion died, I felt great distress and grief and it was the hardest situation I experienced. He was the most patient and strongest among us. I was afraid of death before reaching the Sacred Mosque. Therefore, I was counting the days and hours as if I were on walking on hot coals.
Whenever a cloud flashed in the direction of Hijaz, its flash stirred up my longing. When we reached Jeddah, I suffered a serious illness and I feared I would die before reaching Makkah. So, I told my companion to shroud me in my Ihraaam clothes if I die and bring me as close to Makkah as possible perchance Allah The Almighty doubles my reward and accepts me among the righteous.
We stayed in Jeddah for some days and then we continued our way to Makkah. My breath was accelerating, happiness filled my face and longing was shaking and attracting me until we reached the Sacred Mosque.
When I saw the Ka‘bah I prostrated myself to Allah The Almighty in gratitude. I kept on crying out of awe and respect, like a child. What an honorable house and a great place it is!
Then I remembered my companions who could not reach the Sacred Mosque, and I praised Allah for His favor and bounty over me. Then I supplicated Allah The Almighty to accept their righteous deeds, give them a reward and gather us in a seat of honor near the Sovereign, the Perfect in ability.
I left Haaj ‘Uthmaan’s house repeating the verse in which Allah The Almighty Says (what means): {And hasten to forgiveness from your Lord and a garden as wide as the heavens and earth, prepared for the righteous.} [Quran 3: 133]
Such is the serious will to obey Allah The Almighty, where laziness and procrastination have no place, pains and difficulties carry no weight, and hardships and obstacles have no value. It is a will with sincere morale and high determination which stems from a heart full of love for Allah The Almighty and compliance to His Commands.
Then I reflected on the status of many Muslims today who have all the conditions necessary to perform Hajj but they delay and procrastinate. Do they not remember the Hadeeth (narration) in which the Prophet

said: “Whoever wants to perform Hajj, let him hasten to do so, as he may fall ill, lose his riding animal and the need may arise.” [Ahmad and Ibn Maajah; Al-Albaani: Hasan]