Benefits in This Life and Hereafter 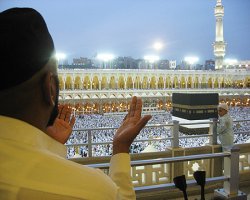 This worldly life is the passageway through which the Muslim safely reaches the Hereafter, and he needs this life in order to achieve the objective of becoming amongst the winners in the Hereafter.

Therefore, a Muslim is not expected (nor instructed) to shun this worldly life completely and sit isolated in a corner. Rather, he is to live in it and utilize it and should not allow it to use and abuse him. He should subdue it to achieve the religious objectives and take from it only enough to achieve such objectives.
Hajj is one of the great acts of worship, and one of the pillars of Islam, and yet Islam does not prevent one from benefiting whilst performing such great rituals; Allah The Almighty Says (what means): {"That they may witness benefits for themselves and mention the name of Allah on known days over what He has provided for them of [sacrificial] animals. So eat of them and feed the miserable and poor"} [Quran 22:28]
Imaam Ibn Katheer

commented on this verse saying, "This refers to benefits in this worldly life and the Hereafter. The benefit in the Hereafter refers to the pleasure of Allah Almighty, and those of this worldly life refer to anything they may gain in trade or eat from the slaughtered sacrificial animals. This is the opinion of Mujaahid and others."
The one who isolates himself from people and claim to do so in order to worship Allah The Almighty and refrains from taking part with the Muslim nation and strive with them in defending the Nation, such a person would not achieve this by performing Hajj. On the other hand, the one whose main concern in this worldly life and he spends his days and nights collecting it will not fulfill the conditions mentioned in the abovementioned verse that connected worldly benefits with the mention of Allah The Almighty.
When the Prophet

performed Hajj with his Nation, Allah The Almighty revealed the following verse (which means): {"This day I have perfected for you your religion and completed My favor upon you and have approved for you Islam as religion"}[Quran 5:3] It was on the Day of 'Arafah of the tenth year of the Prophet's

commented on abovementioned verse saying,
This is the greatest favor bestowed from Allah upon the Muslim Nation, because He perfected religion for them and left them in need for nothing else other than it, and in need for no other prophet other than their prophet

. This is why Allah made Muhammad