A Nation that Glorifies and Submits to its Legislations 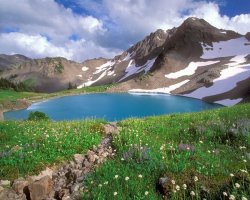 The Muslim nation is one nation since the time Allah The Almighty created Aadam, may Allah exalt his mention, and it will remain as such until the end of time. The Muslims are a nation who are united in their belief in the Oneness of Allah and worshipping Him alone, and thus nothing distinguishes one over the other -- neither color, rank, gender looks, country nor language.

There they are, the Muslims with their diversified backgrounds and colors united in one place to worship Allah The Almighty. In this very great position, the Prophet,

, confirmed this sublime meaning; Jaabir,may Allah be pleased with him, narrated: "The Prophet

admonished us during the days of Tashreeq (11th-13th Thul-Hijjah) a farewell admonishment; he

said: "Your Lord is One;All of you descend from one father (Aadam). There is no preference for an Arab over a non-Arab, a non-Arab over an Arab, a coloured person over a white person or a white person over a coloured person except based on piety. Indeed, the most honourable amongst you in the sight of Allah are the most pious. Did I convey (the message completely)?” They replied: 'Indeed, you did O Messenger of Allah.'Thereuponhe

, was sent.
The one who distinguishes between Muslims in the way he deals with them based on their looks, colors, languages, or backgrounds; the one who does so does not understand the essence of the message with which the Prophet,

, came.
He does not understand the lesson which the Prophet,

, came to teach people.
The one who favors himself over other Muslims, has not understood the lesson which the Prophet,

, came to teach people.
He who sees his fellow Muslims oppressed everywhere and yet lives his life comfortably and feels no pain or distress unless something afflicts him or those whom he cares for; such a person does not understand the lesson which the Prophet,

, came to teach people.
A Muslim who truly glorifies his religion and its legislations gives preference to it over anything else -- over other people's words and opinions, over minds and brains, over men, over his wealth and his own self.
A Muslim who truly glorifies him religion and its legislations believes that it is error free and accepts everything that it has even if he does not fully understand the reasoning and wisdom behind the commandment.
This meaning is fully manifested in performing the rites of Hajj. Every rite of Hajj manifests this meaning very clearly. For example, kissing the Black Stone, while it is only a stone that cannot benefit nor harm to anyone; people kiss it only because it is confirmed that the Prophet,

, had kissed and instructed people to kiss it, and thus they do simply because they glorify their religion and legislation, and because they trust their Prophet,

, and follow in his footsteps.
This was their practice since his time

. It is confirmed that 'Umar,may Allah be pleased with him, kissed the stone and then said: 'I know that you are a stone that cannot benefit me nor harm me, and had it not been that I saw the Prophet

kiss you, I would have never kissed you'
Commenting on the statement of 'Umar,may Allah be pleased with him, Imaam Ibn Hajar

said: 'This statement of 'Umar reflects full submission in the matter of religion and sets an example to follow with regards to the way he imitated the Prophet

despite the fact that he did not know the wisdom behind performing the act'
Those who give precedence to their brains, intellect and desires over religion, or those who refrain from following a command until they understand the wisdom and reasoning behind it; such people do not comprehend the great and essential lesson of glorifying religion and its legislations.