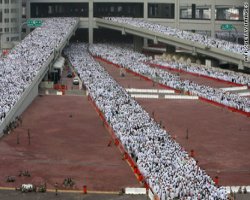 The topic of Hajj safety is an inspiring and soul-stirring subject. Why would it not be when it addresses one of the great signs: The House of Allah. It is a perpetual miracle which calls people to reflect and thus find their way to the Truth and firmly believe that Muhammad

, was truly sent by Allah The Almighty as a messenger.

I cannot help, when talking about Hajj safety, but remember the British researcher Alistair, whom I met three years ago who was in the company of an Australian friend of his. He told me that he was investigating the issue of the safety of communities, and Hajj was one of the environments selected for test and study. After a few trials with the Saudi embassy in England, they finally agreed to grant him a visa to visit the Kingdom of Saudi Arabia and to be around the pilgrims and join the pilgrims in their journey between the different rites.
He was a non Muslim, but no sooner did the season of Hajj finish that he announced his reversion to Islam and he returned the next year to Saudi Arabia as a Muslim to perform the rituals of Hajj.
The main reason behind him embracing Islam, as per his statement, was the result of the study he conducted during Hajj. He discovered the miraculous divine sign in the issue of safety during Hajj.
He said,
When I compared the results of the studies I conducted in the smallest community during football games that were held between the famous teams, the number of fans was around one hundred thousand people. In Hajj, on the other hand, the number was two million people in precise, relatively small areas that were connected areas. The requirements of performing these rites dictate that people are on the move around the clock. People move in a very short period in huge numbers. When comparing the two situations of the games in England and Hajj in Saudi, I noticed a massive and astonishing difference with regards to crime cases. Even though the means and causes for crime are facilitated, like the huge congested crowd, the closeness of people (specially during Tawaaf in Ka'bah) and the set up of accommodation in Minaa. Despite all of that, the crime rate there is not even one tenth that of the crime rate during the games in England in small communities. Additionally, the crime cases in Hajj are limited to theft and some fights due to disputes amongst pilgrims and some traffic violations. However, in England during games, the matter reaches murder, kidnapping, rape, robbery and ruining public property. […] I was certain after my experience that the safety aspect during Hajj cannot but be a divine gift granted by the Lord and a sign that calls people to ponder upon the greatness of Islam and that it is the True religion. This is why I decided to embrace Islam and have changed my name to Ilyaas.
Imaam Al-Qurtubi

said, "Makkah continues to be a sacred place which is safe and protected against earthquakes and other disasters that afflict other places. Allah made people glorify it and fear to commit evil in it to the extent that it became known and famous for its safety"
Allah The Almighty Says (what means):
·        "Have we not established for them a safe sanctuary to which are brought the fruits of all things as provision from Us? But most of them do not know."[Quran 28:57]
·        "And [mention] when We made the House a place of return for the people and [a place of] security."[Quran 2:125]
·        "By the fig and the olive. And [by] Mount Sinai. And [by] this secure city [Makkah]"[Quran 95:1-3]
·        "Have they not seen that We made [Makkah] a safe sanctuary, while people are being taken away all around them?"[Quran 29:67]
These verse and others prove that the safety and security of Makkah was and continues to be from Allah The Almighty, and it is indeed a sign from Allah The Almighty to all people to ponder upon and reflect.

Your diet during Hajj