State of the Righteous Predecessors in Hajj - I 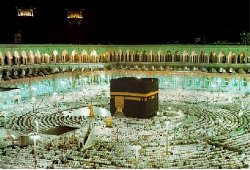 Just a few days are left till the Hajj season. The pilgrims compete in preparing themselves properly to perform this great pillar of Islam.

Wealth is one of the basic necessities of Hajj; but people are different in choosing the type of wealth which will be their sustenance for Hajj.
Some choose unlawfully gained wealth, such as Riba-based loans (usury), mixed shares, and so on. Others are pious and choose only the lawfully gained wealth that is untainted by any unlawful gains in order to have this kind of sustenance during this trip.
It is lawful wealth, the little sustenance in this life and the rare treasure at a time when you rarely find wealth unmixed with what is unlawful.
O pilgrims, lawfully gained wealth is the way to success, the beacon of happiness and the reason behind having your supplication answered.
The Prophet,

, said: “Allah is Good and He accepts only what is good.” [Muslim] That is why our Salaf (righteous predecessors) used to be very particular about the means by which they earned their livelihood lest their deeds and supplications be rejected. Their wives were just as keen, so much so, that one of them would walk her husband to the door as he was leaving in the morning and say to him: "Fear Allah with regards to what you feed us, for we can tolerate hunger but would not be able to tolerate the heat of Hell"
The state of Salaf on assuming Ihraam and Talbiyah
My dear reader: Salaf used to experience the real meaning of Ihraam, which is to remove all earthly desires and lusts, and turn wholeheartedly with one's body and soul, to the Creator of the heavens and the earth. This is why, on assuming Ihraam, their emotions were moved, their colors changed, and they would fret lest it would not be accepted from them.
It was the habit of Anas ibn Maalik, may Allah be pleased with him, that whenever he assumed Ihraam, he would not talk about anything belonging to the worldly affairs until he had removed Ihraam.
When ‘Ali ibn Al-Husayn, may Allah Have mercy upon him, assumed Ihraam, and his riding mount stood upright with him, he turned pale and fretted and was unable to recite Talbiyah. It was said to him, “What is wrong with you?” He said, “I fear lest it would be said to me: “No Labbayk and No Sa‘dayk” (Your call is not responded to, and no happiness is destined to you, in reference to the rejection of worship from him).”
When Ja‘far As-Saadiq

performed Hajj, and intended to recite Talbiyah, the color of his face changed. It was said to him, “What is wrong with you, O grandson of the Messenger of Allah

?” He said, “I intend to say Talbiyah, but I fear I would hear something else rather than the response (to Talbiyah).”
Whenever Shurayh

assumed Ihraam, he would seem as motionless as a still female-snake, due to his absolute silence, meditation and lowering his head to Allah The Almighty.
Though many pilgrims in those days did not recite Talbiyah, and most of them did not raise their voices with it nor pronounce it publicly even if they said it, Salaf did the opposite of that.
According to Abu Haazim

Whenever the Companions of the Messenger of Allah,

, assumed Ihraam, they would not reach Ar-Rawhaa’ before their voices would become hoarse (due to raising their voices with Talbiyah). Indeed, they knew that this was something loved by Allah The Almighty, as confirmed by the statement of the Messenger of Allah,

: “Jibreel (Gabriel) came to me and told me to command my Companions to raise their voices with Talbiyah.” [Abu Daawood, At-Tirmithi, Ibn Maajah and An-Nasaa’i; Al-Albaani: Saheeh] And, his statement,

: “The best (deeds of) Hajj is to raise one’s voice with Talbiyah, and cause the blood of (slaughtered) sacrifices to flow.” [At-Tirmithi; Al-Albaani: Hasan]
Worship of Salaf in Hajj
According to the grand Imaam Ibn Rajab

one of the greatest deeds of righteousness to be done in Hajj is to establish prayer: he who performs Hajj, especially when it is voluntary, without establishing prayer is like the one who sought to earn a single Dirham for which he wasted his capital of many thousands. Salaf maintained the voluntary prayers with great care. The Messenger of Allah,

, used to perform the voluntary prayers in all his journeys on his riding mount on which he used to also perform the Witr prayer.
It is narrated on the authority of ‘Aamir ibn Rabee‘ah, may Allah be pleased with him, that he saw the Messenger of Allah,

, performing the supererogatory prayer at night on his journey on the back of his riding mount wherever it turned with him. [Al-Bukhari and Muslim]
It is further narrated on the authority of Ibn ‘Umar, may Allah be pleased with them, that he said, “The Messenger of Allah

used to perform the supererogatory prayer along with the Witr prayer (on journey) on his riding mount to whichever direction it turned with him. But he did not perform the prescribed obligatory prayer on it.” [Al-Bukhari and Muslim]
It was the habit of Muhammad ibn Waasi‘

to perform the voluntary prayers on the way to Makkah for the whole night on the back of his camel, by way of nodding, and he would command his camel driver to raise his voice behind him, in order to divert the people’s attention with his voice from him.
Masrooq

performed Hajj, during which he did not sleep but in the prostration posture.
Al-Mugheerah ibn Hakeem As-San‘aani

used to perform Hajj from Yemen on foot, and he had a devotional recital every night in which he used to recite one-third of the Quran: he used to stop and perform prayer until when his devotional recital was over, he would then join the caravan of travelers whenever he was able to, and perhaps he could not manage to join them before the end of the day.
After relating those stories, Ibn Rajab

said, “We command the people just to maintain with care the (obligatory) prayers at their due times, even by combining each pair of prayers possible to combine at the time of either of them. There is no concession for anyone to perform the night prayer during the day, nor the prayer of the day at night, nor the prescribed obligatory prayer on the back of his riding mount.”
How Salaf were cautious about showing off and boasting
In order for the pilgrimage to be accepted (by Allah) with full acceptance, it is due on the pilgrim not to intend by his pilgrimage to be seen or heard of by men, nor to boast, nor to preen, nor to show pride or be arrogant: in sum, he should intend thereby only the countenance and good pleasure of Allah The Almighty. He should also humble himself in Hajj, and be meek and submissive to his Lord The Almighty.
The Salaf

were extremely eager to keep their deeds far from any taint of showing off or worldly pride, because they knew that Allah The Almighty would only accept the deed that is done for Him sincerely and correctly in accordance with the Sunnah (tradition) of His Prophet,

, as confirmed by the Statement of Allah The Almighty in the Qudsi Hadeeth (sacred narration): “He, who does a deed in which he associates a partner with Me, I then will leave him with the partner whom he associates.” [Muslim] For this reason, when a man said to Ibn ‘Umar, may Allah be pleased with them, “How many pilgrims there are!” Ibn ‘Umar, may Allah be pleased with them, replied to him, “Nay! How few they are (from whom Hajj is accepted by Allah)!”
According to Shurayh Al-Qaadhi

“The pilgrims (from whom Hajj is accepted) are few, even though the riders (who set out for Hajj) are many. How many are those who do good, but how few are those who intend, by their deed, His Countenance, The Almighty.”
On his way to Makkah, ‘Umar ibn Al-Khattaab, may Allah be pleased with him, said, “No doubt, (on this journey of Hajj) you become disheveled, covered with dust, engaged in recitation (of the Quran), and offered your sacrifice, thereby intending nothing from the worldly transitory benefits. We do not know of a journey better than this”, meaning Hajj.

State of the Righteous Predecessors in Hajj - II