State of the Righteous Predecessors in Hajj - II 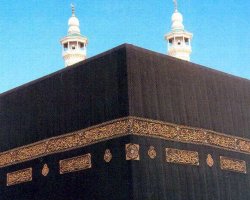 My brothers! Exalted be He, who made His Sacred House a place of return for the people and [a place of] security, which they frequent and feel they have not satisfied their desire from it. When Allah The Almighty attributed the House to Himself in His Statement (what means): {and purify My House for those who perform Tawaaf and those who stand [in prayer] and those who bow and prostrate} [Quran 22:26], the hearts of those who love their Lord became attached to the House of their Beloved, to the extent that whenever this Sacred House is mentioned to them, they are moved by longing for it, and whenever they remember their remoteness from it, they would moan because of that.

One of the righteous predecessors saw the pilgrims at the time of setting out for Hajj, thereupon he stood and continued weeping, and saying, “How weak I am!” Then, he took a deep breath and said, “That is the grief of him who has no access to the House: then, how should be the grief of him who has no access to the Lord of the House?”
It is fitting for the one who sees those who find access (to Allah) -- whereas he does not -- to become anxious, and the one who watches the travelers to the House of the Beloved -- whereas he is sitting -- to grieve.
The state of the righteous predecessors in ‘Arafaat
My dear reader, the righteous predecessors had various states in ‘Arafaat: some of them were overpowered by fear and modesty, others were attached to the tails of hope, and others were possessed by longing and anxiety. But all of them were equal in Thikr (remembrance), supplication, devotion to Allah The Almighty, private talk and submission to Him.
Mutarrif and Bakr, sons of ‘Abdullaah ibn Ash-Shakheer, may Allah be pleased with them, stood in the standing place (of ‘Arafah). Mutarrif said, “O Allah! Return not these in the standing place (with failure) because of me!” Bakr said, “How honored and hopeful this standing place is for its people, had it not been for my presence among them!”
Al-Fudhayl said to Shu‘ayb ibn Harb

during the season of Hajj, “If you think there is, in the standing place, anyone worse than you and me, then you are quite mistaken.”
Abu ‘Ubaydah Al-Khawaas

used to say in the standing place, “How I long for Him Who sees me and I see Him not.” When he grew old, he used to seize his beard and say, “O Lord! I have grown old. So, please, emancipate me.”
Sufyaan Ath-Thawri

used to give priority to hope on this day. According to Ibn Al-Mubaarak

in the evening of (the day of) ‘Arafah and he was kneeling, with his eyes shedding tears. He turned his face to me and I asked him, “Who is the worst state among these gatherings?” He said, “The one who thinks that Allah will not forgive them.”
It is narrated from Al-Fudhayl

that he looked at the people’s whimpering and weeping on the evening of (the day of) ‘Arafah, thereupon he said, “Tell me: if they went to a man to beg a Daaniq (one-sixth a Dirham) from him, would he refuse them?” They answered in the negative, thereupon he said, “By Allah, forgiveness, in the Sight of Allah, is easier than the response of that man with the Daaniq.”
The state of the righteous predecessors in Tawaaf
According to ‘Abd-Al-Majeed ibn Abi Rawwaad

“They used to perform Tawaaf round the House, submissive, remembering (the praises of Allah, as motionless) as if there were birds on their heads, clear to anyone seeing them that they were in religious service and worship.”
Taawoos

was one of those in whom this characteristic was visible.
Among the acts of worship to be observed during Tawaaf is to lower one's gaze in view of the intermixing between men and women during Tawaaf. According to Ibn Al-Jawzi

“It should be known that to lower one's gaze from the unlawful is obligatory. There are many evils that have been brought about by unleashing the sight, especially at the time of Ihraam, where women expose their faces. So, it is due on him, who fears Allah The Almighty, to deter his desire in this standing, out of honoring the intended worship. A lot of people became corrupt by unleashing their sight in this respect."
Furthermore, it is due on women not to expose their faces during Tawaaf, even if they are in the state of Ihraam. It is narrated on the authority of ‘Aa’ishah, may Allah be pleased with her, that she said: “The riders happened to pass by us (women) while we were with the Messenger of Allah

in the state of Ihraam; and if they came near us, we would let her outer garment hang down from her head over her face, and once they left, we would expose it.”
It is also due on women not to crowd with men in Tawaaf, but rather choose the times at which there is not much crowding, as the Mother of Believers, ‘Aa’ishah, may Allah be pleased with her, did: she used to perform Tawaaf in an independent side of the House, far from the crowds of men. She neither kissed nor touched the Black Stone, nor touched the Yemeni Corner, in case there was a crowd. When her freed slave woman said to her, “O Mother of Believers! I have performed a seven-round Tawaaf round the House, touched the Corner twice or thrice”, ‘Aa’ishah, may Allah be pleased with her, said to her, “May Allah not reward you! May Allah not reward you! Do you push your way through the crowds of men? Why have you not glorified Allah and then passed by?”
According to Ibn Al-Muhibb At-Tabari, “The conduct of the women of Makkah and others in that place on the night prior to Friday and at other times is indeed a wicked evildoing, as regards mixing with men and pushing between them, let alone their adorning themselves for that with different kinds of adornment and applying pleasant perfumes, thereby distracting the pious performers of Tawaaf, and causing the eyes to look at them. Some, if not most of them, perform Tawaaf with no socks, and in many cases, it becomes difficult upon men to avoid touching them. That is indeed a great evil, by which disaster has become general, and the people seem to have accepted it unanimously."
So, it is due on the servant to deem his Tawaaf far beyond any of those evils, and not to feel safe from the punishment of impoliteness and outrageous violation during the standing.
It was said that both Isaaf and Naa‘ilah, the known idols, were a man and a woman belonging to (the tribe of) Jurhum, who entered the Ka‘bah and kissed each other, thereupon they were transformed into two stones in their place.

State of the Righteous Predecessors in Hajj - I