Harms of Delaying the Hajj - I 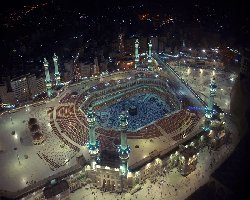 How could a faithful believer accept to leave off Hajj given his capability of fulfilling it with his property and body, when he knows that it is among the obligatory duties and fundamental pillars of Islam?

How could one greedily withhold his property from performing this obligatory duty, given that he spends it on what his soul desires?

How could one not want to tire himself in Hajj given that he tires and fatigues himself in worldly affairs?
How could one become too lethargic to fulfill this obligatory duty given that it is due only once in the lifetime?
How could one delay performing Hajj given that he does not know whether he would have the power to reach it after this year or not?
Beware  of  hoping to live long!
O you, whom Allah The Almighty gave property and he has not yet performed Hajj! It should be known to you that life is short, what remains thereof is shorter (than what has elapsed), the appointed term is decreed but not known,   not available all the time and health is not assured perpetually.
1- Have you not heard Allah The Almighty saying to His Prophet,

(what means): {Let them eat and enjoy themselves and be diverted by [false] hope, for they are going to know.} [Quran 15:3]
That is to say, let them live as cattle, interested only in food and desires and engaged in hope, as having excessive ambitions will divert them from obeying the Lord of the Worlds.
Have you not heard the statement of Allah The Almighty (which means): {Do they not look into the realm of the heavens and the earth and everything that Allah has created and [think] that perhaps their appointed time has come near?} [Quran 7:185]
2- Have you not heard Anas bin Maalik, may Allah be pleased with him, saying, “The Messenger of Allah

drew a line and said:‘This is (the example of) man.’Then, he drew another line beside it and said:‘That is his lifetime.’Then, he drew a third line far from it (the first) and said: ‘That is (man's) hope, and while he is in this state (of hope), the nearer line (death) attacks him.’" [Al-Bukhari]
3- The Prophet,

, feared for us from having excessive hope of living too long. In this respect, it was narrated on the authority of Jaabir, may Allah be pleased with him, that the Prophet,

, said: "Fancies and extensive hope (to live too long) are what I fear most for my Ummah (nation). As for fancy, it diverts (people) from the truth; and as for the extensive hope, it causes one to forget the Hereafter." [Al-Haakim]
4- So, talk yourself to account and hurry, O heedless one!.
Al-Hasan Al-Basri

said, "Hurry, hurry (to do good things), for it is only breaths (which connect you with that life) and if they stop, your deeds which bring you closer to Allah The Exalted would stop as well. May Allah have mercy upon the man who looks at himself and then weeps for the number of his sins." Then, he recited the following verse (which means): {We only count out to them a [limited] number.} [Quran 19:84] He resumed, "The last number to be counted is your death, departure from your family and entering your grave."
You have a limited number of steps which you can never exceed and a fixed number of breaths beyond which you will never go.
For this reason, the Prophet,

, urges us to hurry (to do good deeds) and avail ourselves of (the opportunity offered by) life and time.
1- It was narrated on the authority of Abu Hurayrah, may Allah be pleased with him, that the Prophet,

, said: "Hasten to (good) deeds before (the coming of) seven (things): are you waiting for poverty that causes one to forget (remembering Allah and the Hereafter), richness that causes one to transgress all due bounds, sickness that corrupts (the health), old age that brings about senility (by which one might lose reason), inevitable and sudden death, (the affliction of) Ad-Dajjaal, which is an absent but expected evil, or the Hour, and the Hour is more disastrous and more bitter" [At-Tirmithi]
2- It was further narrated on the authority of Jaabir bin ‘Abdullaah, may Allah be pleased with him, that he said that the Messenger of Allah,

, addressed them in a Khutbah (sermon) saying: “O people! Turn in repentance to Allah before you die, and hasten to do righteous deeds before you are occupied (by illness and the like of it), and maintain what is between you and your Lord (i.e. His right over you) by remembering Him frequently, and giving charity frequently in secret and public, so that you would be provided with sustenance and victory and your affairs would be mended." [Ibn Maajah]
3- It was narrated on the authority of Ibn ‘Abbaas, may Allah be pleased with him, that the Messenger of Allah,

, said to a man while instructing him: "Avail yourself of five (good benefits you have) before (the coming of) five (evil things you would suffer from): (avail yourself of) your youth before (the coming of) your old age, your health before (the coming of) your illness, your richness before (the coming of) your poverty, your leisure before (the coming of) your occupation and your life before (the coming of) your death." [Al-Haakim]
You have to show regret and turn in repentance today before you are forced to show regret on a day on which it would be of no profit to you to regret. At that time, man would say (what means):
Put before your eyes the following Statement of Allah The Almighty (which means): {And spend [in the Way of Allah] from what We have provided you before death approaches one of you and he says, "My Lord, if only You would delay me for a brief term so I would give charity and be among the righteous." But never will Allah delay a soul when its time has come. And Allah is acquainted with what you do.} [Quran 63:10-11]
At the time death approaches you, you would neither return to your World, nor add to your good deeds. You have to work for the Day of Judgment, the Day of grief and regret.
Adhere to that gain by availing yourself of those virtuous seasons, which cannot be substituted.
Hasten to do good and hurry before the attack of death;
Before the indulgent shows regret for his indulgence;
Before he asks to be sent back to life to do righteousness, and his question receives no answer;
Before death impedes the hopeful from realizing his hope;
Before one becomes in his hole, in pledge of the deed which he has sent forth.
You should know that if one does not avail himself of the opportunity, it would turn into a cause of grief. Means might be available to you today, but not tomorrow.
Thus, sow today to reap tomorrow, and tomorrow is very near.
You should know that if Allah The Almighty wills good for a slave, He expands his breast to accept that in which there lies his prosperity and salvation, and uses his organs in doing what pleases Him.
The successful happy one is the one, who, if instruction is given to him, his heart is opened to it, and his organs become responsive to act upon it. Those have the glad tidings (of Paradise) as stated by the Lord who says (what means): {So give good tidings to My servants who listen to speech and follow the best of it. Those are the ones Allah has guided, and those are people of understanding.} [Quran 39:17-18]

Harms of Delaying the Hajj - II