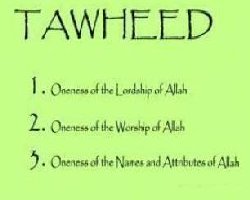 Manifestations of Tawheed in the comprehensiveness of the Mercy and Forbearance of Allah The Almighty:

Forbearance and Mercy are attributes of Allah The Almighty, and when you read the authentic Hadeeth, (narration) in which the Prophet

Have you seen how staunch their faith in Tawheed was and how they submitted to the command of Allah The Almighty? He was still young, but when asked to give his life up he accepted for the sake of Allah. Allah The Almighty Says (what means):{He said, "O my father, do as you are commanded.} [Quran 37:102]. He did not brag about being brave or strong, but he relied on Allahby saying(what means): {You will find me, if Allah wills, of the steadfast.}[Quran 37:102]May Allah exalt the mention of Ismaa`eel (Ishmail). He was ready to give his life up in submission to Allah The Almighty. How great this was! For their sincere Tawheed and submission, Allah the Almighty ended their ordeal.

Manifestations of Islamic Monotheism in Hajj - I